An analogy is one useful method for interpreting a relationship between uncommon expressions. In this article, we will see how to solve the analogies and classification related questions and why it is important to know about it.

What is meant by Analogy?

A cognitive process where information or meaning from a particular subject is transferred to another, this process is called Analogy. In short, the term analogy can relate to the relationship between the ‘source’ and the ‘target’ themselves.

An analogy is a comparison between two objects or systems of objects, that emphasize respects in which they are thought to be alike.

What is Classification Analogy?

Classification analogy is one of the most common types of analogies, where there is comparing terms according to categories.

The act of grouping various objects on the basis of their common characteristics is known as classification. 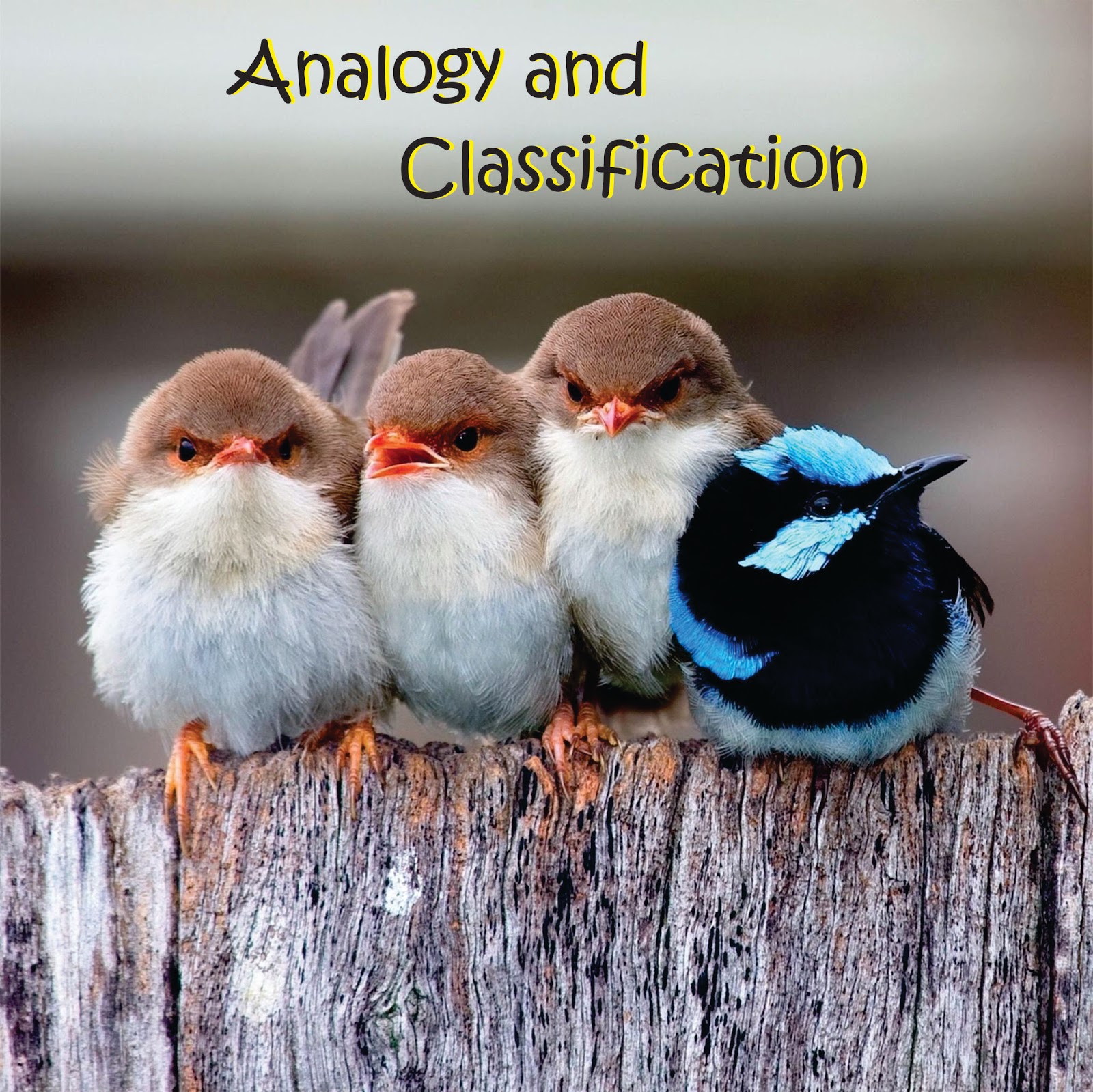 In other words, a classification analogy is where there is a comparison between terms as per which group they belong to.
Let’s have a look at how one analysis, finds and solves Classification analogies. To explore more, click the downloadable PDF. 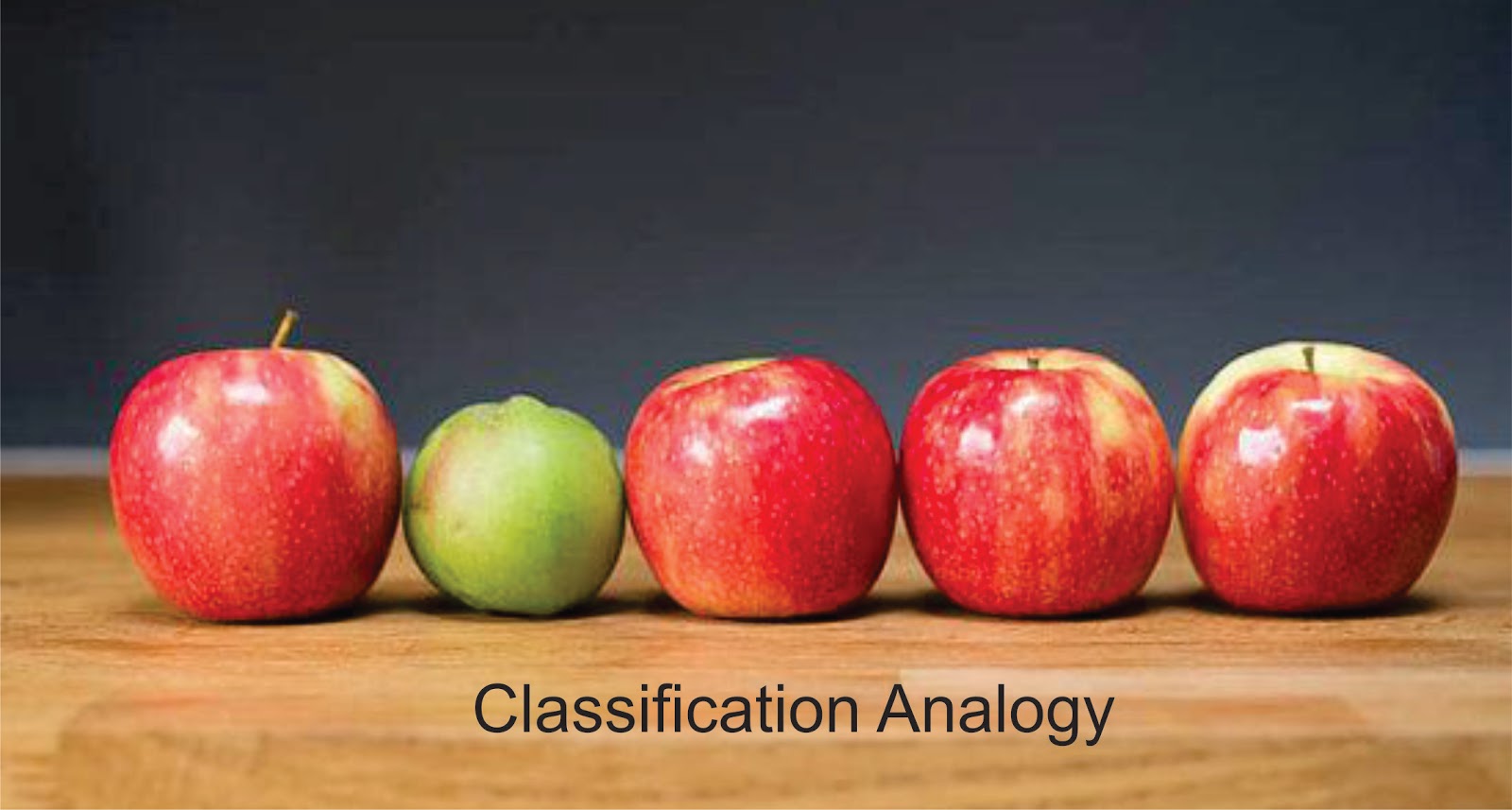 Below are a few ways to solve analogy based questions. Followed by a few examples of classification analogies in which either the object or the group are missed.

Tricks or ways to solve Analogies and Classification Analogies

Use these steps and try solving a few examples given below.

Examples for Analogies and Classification from Cuemath

Identify the relationship and find the missing figure.

Example 1: Identify the relationship between the given pair on either side of :: and find the missing figure.

Answer: Reason as half of digit 4 is 2, when digit 8 is divided into the half we get digit 4.

Example 2: Identify the relationship between the given pair on either side of : : and find the missing figure.

Answer: A pen is used to write on the book, the ball is used while playing bat.

Identify the property followed in the set and find the odd one out.

Example 1: Find the odd one out.

Answer: Like all other numbers 2, 4, 6 are even numbers and divisible by 2 whereas 7 is an odd number.

Example 2: Find the odd one out.

Answer: Reason as all other options we wear it on our upper body whereas we put socks on feet.

Question 1: Choose the fish that does not belong to the group.

Question 2: There is a certain relationship between the pair of figures on either side of ::. Identify the relation and find the missing figure.

Question 3: Find the odd one out.

Question 4: Figure (i) and (ii) are related to each other in some manner. Establish a similar relationship between figures (iii) and (iv) by selecting a suitable figure from the options.

Question 5: There is a certain relationship between the pair of figures on either side of :: . Identify the relationship and find the missing figure.

Question 6: Which of the following figures is the same as the given figure?

Question 7: The first two figures are related. Choose an option that establishes the same rotation between the third and fourth figures.

Question 8: Find the odd one out.

After understanding Analogy and classification well, students will be able to predict individual differences between pairs of elements. After observing the options carefully will choose the odd one out. Children will also be able to analyze figures and patterns while solving any problem. The analogy helps children develop logical thinking.

As we know practise makes one perfect, it is through practice children can be better at analogies. At Cuemath, we use these types of analogies based questions which are designed by professionals. Our main aim is to cue our students, such that they understand and solve any analogies logically and independently in the future.

An analogy is a very useful trait that helps in fixing a problem, finding solutions, decisiveness, debate, percepts, conception, memorizing, imagination and creativity, invention, predicting and feeling, explaining and communicating. Thus inculcating various analogies into the children at a young age is not just beneficial but also helps them become more adaptive to the alternate conditions, and are more prone to challenges in life.

-Why successful people use analogies?

Mastering the art of the analogy can save your time, money, resources which is why successful people use them daily and understand their importance.

-What does the persuasive power of analogy, actually mean?

When it comes to creating effective understanding, analogies are hard to beat, most of which comes from the audience arriving at the intended understanding of their own. This is what is termed the persuasive power of analogy.