What is Conic Section?

The curve is also defined by using a point(focus) and a straight line (Directrix).

If we measure and let

a – the perpendicular distance from the focus to a point P on the curve,

and b – the distance from the directrix to the point P,

then a: b will always be constant. Eccentricity: The above ratio a: b is the eccentricity.

Thus, any conic section has all the points on it such that the distance between the points to the focus is equal to the eccentricity times that of the directrix. The line parallel to the directrix and passing through the focus is Latus Rectum. = the diameter of the circle.

Ellipse has a focus and directrix on each side i.e., a pair of them.

the section is curved. Further, x, y, x y and factors for these and a constant is involved.

Thus, the general equation for a conic is

Conic or conical shapes are planes cut through a cone. Based on the angle of intersection, different conics are obtained. Parabola, Ellipse, and Hyperbola are conics. Circle is a special conic. Conical shapes are two dimensional, shown on the x, y axis. Conic shapes are widely seen in nature and in man-made works and structures. They are beneficially used in electronics, architecture, food and bakery and automobile and medical fields.

What are the 4 types of conic sections?

According to the angle of intersection between a plane and a cone, four different conic sections are obtained. They are Parabola, Ellipse, Hyperbola, and Circle. They are two dimensional on the x-y axis. How do we obtain Conic Sections?

Conic section involves a cutting plane, surface of a double cone in hourglass form and the intersection of the cone by the plane. According to the angle of cutting, that is, light angle, parallel to the edge and deep angle, ellipse, parabola and hyperbola respectively are obtained. Circle is also conic, and it is cut parallel to the circular bottom face of the cone. 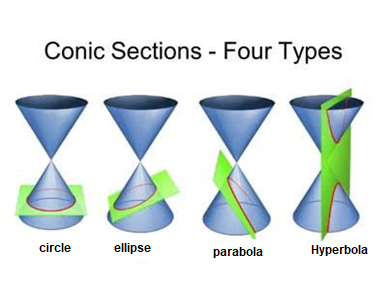 How do you find the area of an ellipse? where a = length of major axis of ellipse

b = length of minor axis of ellipse.

What are some real-life applications of conics?

Planets travel around the Sun in elliptical routes at one focus.

Mirrors used to direct light beams at the focus of the parabola are parabolic.

Car headlights and spotlights are designed based on parabola’s principles.

The path travelled by objects thrown into air is parabolic. 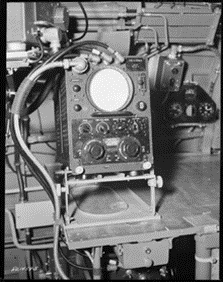