In Statistics, a t-test can be represented as a statistical hypothesis test where the test statistic supports a student’s t distribution if the null hypothesis is established. In Paired T-Test, they compare the means of two groups of observations. The observations must be randomly assigned to each of the two groups so that the difference in response seen is due to the treatment and not because of any other factors. If two samples are given, then the observation of one sample can be paired with the observation of the other sample, by using the paired t-test.

Further, this test can be used in making observations on the same sample before and after an event. Now, let us discuss what is paired t-test, its formula, table, and the procedure to perform the paired t-test in detail.

The paired t-test gives a hypothesis examination of the difference between population means for a set of random samples whose variations are almost normally distributed. Subjects are often tested in a before-after situation or with subjects as alike as possible. The paired t-test is a test that the differences between the two observations are zero.

Let us assume two paired sets, such as Xi and Yi for i = 1, 2, …, n such that their paired difference is independent which is identically and normally distributed. Then the paired t-test concludes whether they notably vary from each other.

The formula for the paired t-test is given by 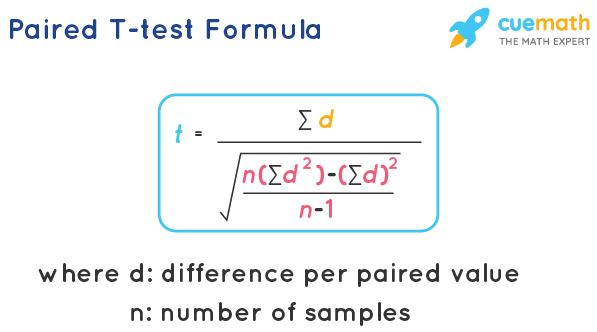 Paired T-test table enables the t-value from a t-test to be converted to a statement about significance. The table is given below:

The similarity between paired and unpaired t-test is that both assume data from the normal distribution.

How to Find the Paired T-Test?

Here are a few important notes on the Paired T-Test:

How Do You Know if Paired or Unpaired T-Test?

Should I Use Paired or Unpaired T-Test?

If the data are paired or matched, then you should choose a paired t-test instead. If the pairing is effective in controlling for experimental variability, the paired t-test will be more powerful than the unpaired test.

What Is the Difference Between a Paired T-Test and a 2 Sample T-Test?

Why Would You Use a Paired T-Test?

How Do You Interpret a Paired T-Test?

Complete the following steps to interpret a paired t-test.
...

How Do You Know if Data Is Paired?

Two data sets are "paired" when the following one-to-one relationship exists between values in the two data sets.