What if I tell you that they had a calculator all along!

Yes, it was the abacus that was heavily used for complex calculations before the invention of electronic calculators.

Abacus is a useful learning piece of equipment for the visually impaired, as well as for anyone who wants to learn the origins of a modern calculator.

In this article, you will learn how Abacus is used for simple division. Download the PDF below to know the history of the abacus and division using an abacus.

The “normal method of calculation in Ancient Greece and Rome was done by moving counters on a smooth board or table suitably marked with lines or symbols to show the ‘places.’

The origin of the portable bead frame abacus is not well-known. It was thought to have originated out of necessity for travelling merchants.

The widely used abacus throughout China and other parts of Asia is Known as Suanpan. It has five unit beads on each lower rod and two ‘five beads on each upper rod.

The Russian abacus, the Schoty, has ten beads per rod and no dividing bar.

The Soroban abacus is considered ideal for the base-ten numbering system, in which each rod acts as a placeholder and can represent values 0 through 9. 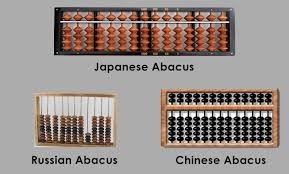 The abacus has played a vital role in mathematics that can still be seen today.

The abacus is portable to be used by merchants and allows it to be introduced to all parts of the world. It is also flexible to be used across cultures.

Consider adding 8 and 4. The process begins by registering 4 on the unit rod H, Because the sum of the two numbers is greater than 9, subtraction must be used. 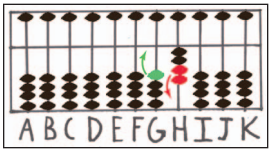 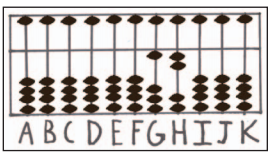 This rule remains the same regardless of the numbers used. As we all know, subtraction is the opposite operation of addition.

Thus, when subtracting with the Soroban abacus, we add the complement and subtract 1 bead from the next highest place value.

How to perform division on Abacus?

The division is done by dividing one number in the divisor into one or possibly two numbers of the dividend at a time.

The operator multiplies after each division step and subtracts the product. The next part of the dividend is then tacked onto the remainder, and the process continues. It is more the same as doing it with a pencil and paper.

Below is a technique for working with division problems with four or more digits in the equation on the abacus.

The common practice is followed by leaving 4 unused rods in between the two numbers. It’s on these unused rods where the quotient answer is formed.

So, let's start by reviewing the standard paper method.

The way we do it on the abacus is very similar to the way we did it on paper. The one difference is that on paper, we did the multiplication and subtraction as two steps; on the abacus, we're going to combine.

In this example, the dividend has three whole numbers. 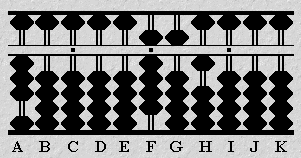 Step 2: The divisor (3 on A) is smaller than the dividend (9 on F). Therefore apply "Rule I" and set the first number in the quotient two rods to the left on D. Divide 3 on A into 9 on F and set the quotient 3 on rod D.

Multiply the quotient 3 by 3 on A and subtract the product 9 from rod F. This leaves the partial quotient 3 on D and the remainder of the dividend 51 on rods GH. Step 3: Divide 3 on A into 5 on G. Once again the divisor is smaller than the dividend so follow "Rule1". Set the quotient 1 on rod E.

Multiply the quotient 1 by 3 on A and subtract the product 3 from 5 on rod G. This leaves the partial quotient 31 on DE and the remainder of the dividend 21 on rods GH. 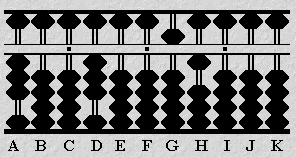 Multiply the quotient 7 by 3 on A and subtract the product 21 from rods GH leaving the answer 317 on rods DEF. In problems of division, getting to the correct answer can sometimes involve a little trial and error. The division problem shown below is a case in point.

In this type of problem making a judgment as to what the exact quotient will be can be difficult.

Estimation is often the best course of action. It's the ease with which an operator can revise an incorrect answer that makes the soroban such a superior tool for solving problems of division. Step 2: In this problem, the first two digits in the divisor are larger than those of the dividend.

Apply "Rule II". Set the first number in the quotient one rod to the left of the dividend, in this case on rod F. Think of the problem as dividing 16 on AB into 140 on GHI. Now estimate the quotient.

It seems reasonable to estimate a quotient of 7. Set 7 next to the dividend on rod F.

Multiply the quotient 7 by 1 on A and subtract the product 7 from 14 on rods GH.

Multiply the quotient 7 by 6 on B and subtract the product 42 from rods HI.

Revise both the quotient and the dividend. Add 1 to the quotient on rod F to make it 8. Subtract a further 16 from rods HI. This leaves the partial quotient 0.08 on CDEF and the remainder 12 on HI. Multiply the quotient 8 by 1 on A and subtract the product 8 from 12 on rods HI.

Multiply the quotient 8 by 6 on B and subtract the product 48 from rods IJ.

Revise both the quotient and the dividend. Subtract 1 from 8 on G. Add 1 to 4 on the rod I.

Continue with the problem but this time use the revised quotient of 7. Multiply 7 on G by 6 on B and subtract 42 from rods IJ. This leaves the partial quotient 0.087 on rods CDEFG and the remainder, 8, on rod J. Multiply the quotient 5 by 1 on A and subtract the product 5 from 8 on rod J.

Multiply the quotient 5 by 6 on B and subtract the product 30 from rods JK leaving 875 on rods FGH. With rod D acting as the unit, the answer reads 0.0875 on rods CDEFGH. Division on the abacus to be really interesting. It's impressive how fast you can do division on such a trivial addition-based device.

Just an afternoon practising, and you can probably do most divisions on an abacus much faster than you could on paper.

The real trick to doing complicated things is exactly what we saw in the division: partitioning the abacus into regions.

Performing basic operations like the division on an abacus involves and develops a child's mind.

What are the advantages of learning how to use an abacus?

How to use an abacus?

It is a simple device used for counting, much beneficial for the visually impaired, once you

know the basics of counting on an abacus, you can easily perform various operations on it .

Following are the basic steps to be followed:

How to learn abacus?

We can easily learn abacus ,once we  learn the basics of how to count on abacus using beads and its placements  , we can perform basic operations on abacus.