Numbers up to 10-Digits

Numbers up to 10-Digits
Go back to  'Number Systems'

Introduction to Numbers up to 10-Digits

There is a number so large that for you to count from 1 to that number, it would take years together.

If you constructed a cube with a volume equal to that number, the cube would have to be more than 80 feet tall.

The number we are talking about here is a Billion, and it is the smallest ten digit number, written as 1000000000

Just to give you a perspective about how large this number is, consider that your school is 3 miles from your house.

You must have read about the planets in school and must have heard of Pluto.

Well, the distance of the sun from Pluto is 3 billion miles.

You take half an hour to reach your school from your house.

So you would take a billion times more to reach the sun from Pluto.

The Big Idea: Numbers up to 10-Digits

A Simple Idea: The Importance of a Comma

As we said above, the smallest ten digit number is called a billion, and it is written as 1 followed by 9 zeros.

Since the third comma after the 7th digit from right denotes the start of a crore, so this number would be called 100 crores (one Arab) in the Indian number system.

Let us now look at the 3:3 system of comma placement in the International number system. This number would be written as 1,000,000,000.

Since the third comma after the 9th digit from right denotes the start of a billion, so this number would be called 1 billion in the International number system.

How to Decompose 10-Digit numbers?

Any ten digit number has place values up to one Arab (100 crores) or one billion.

These are the names of the place values (starting from the right) in a ten-digit number:

A 10-Digit Number We All Should Be Familiar With

The population of the world would soon be 8 billion.

To get an idea of how large that number is, digest the fact that even with so many companies making so many people so rich, at present there are only 140 people out of this 8 billion who are worth more than $7 billion.

If this number was not big enough, just remember that the population of the world was 5 billion in 1987, and in the next twelve years, it became 6 billion, and in another 12 years, it crossed 7 billion.

The following facts will give you an idea of how large a number 7 billion is:

That is how big the smallest 10-digit number is.

Comparison of the Indian System and the International System 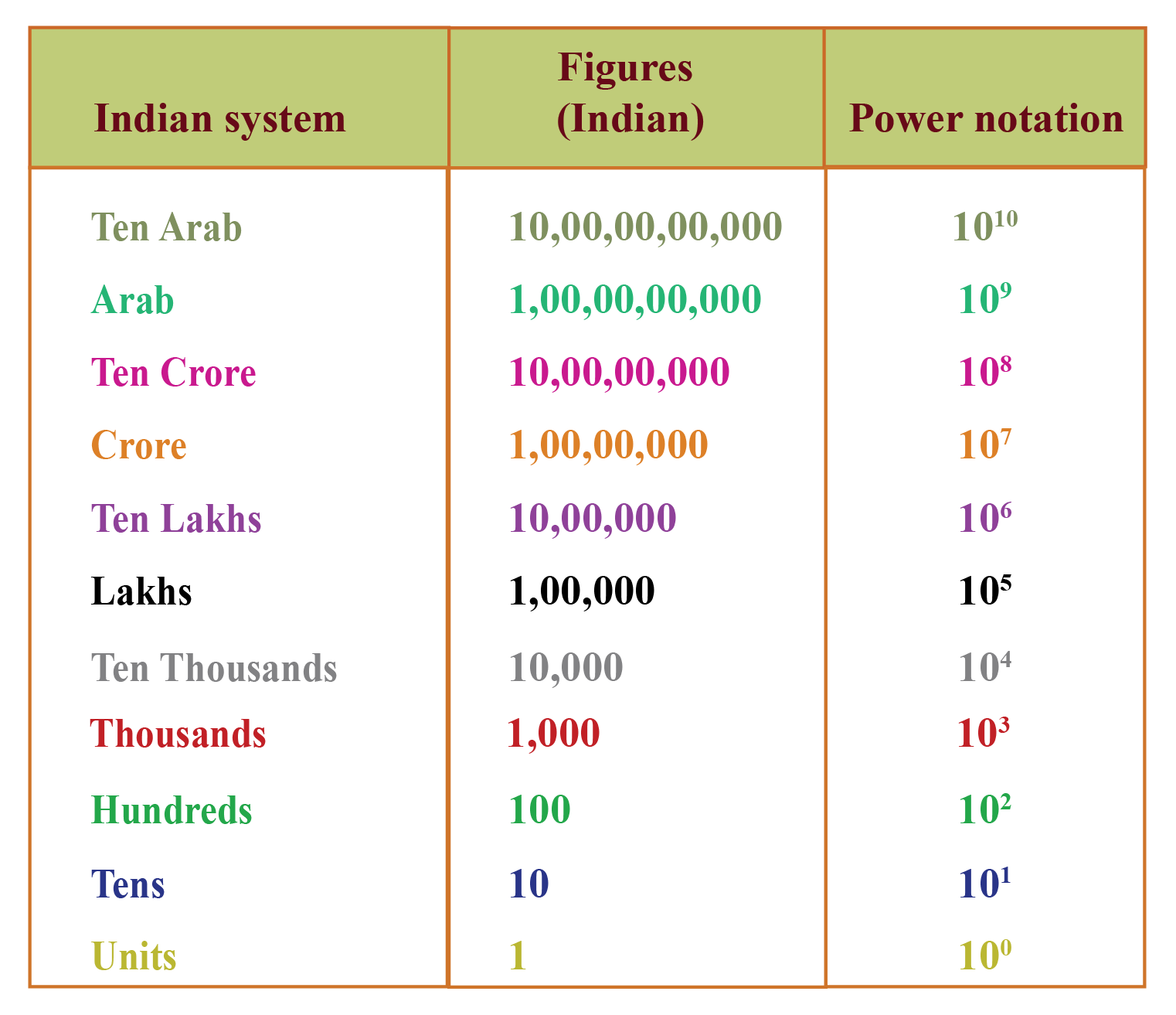 Try the simulation shown below to see how the commas are placed in any number (Numbers up to 10-Digit) according to the Indian place value system and the International system.

Write the number names according to both the systems.

This is read as Six arab, seventy-five crore, forty-three lakh, forty-nine thousand, one hundred and thirty-two

The International system separates these numbers by adding commas in this way: 6,754,349,132

Find the two numbers with the help of the abacus.

Calculate their sum and place the commas according to the International place value system. Write the predecessor and successor of 3,45,75,42,009 along with their number names according to the Indian place value system. 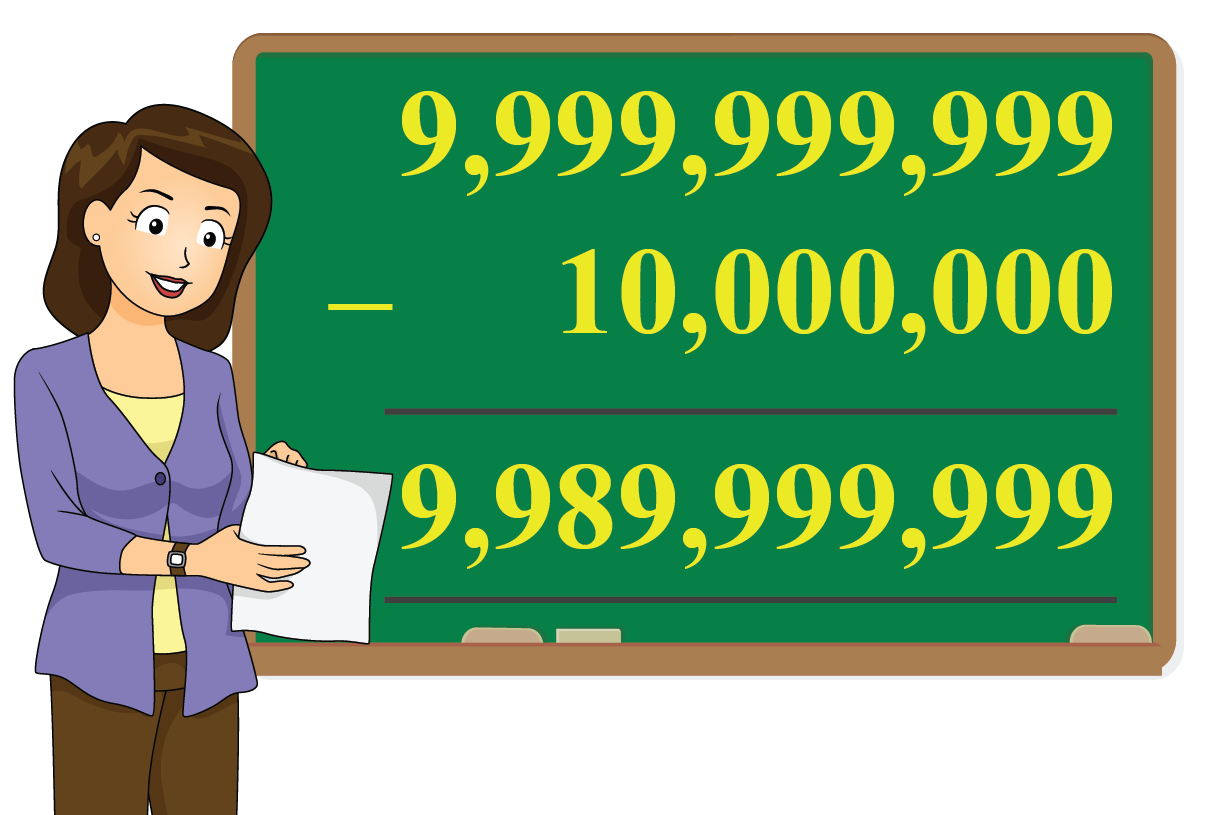 1. Find the 10-digit mystery number in which:

Have a doubt that you want to clear? Get it clarified with simple solutions on Numbers Up to 10 digits from our Math Experts at Cuemath’s LIVE, Personalised and Interactive Online Classes.

Yes, a 10-digit number is read as a billion.

2. How many digits are there in a billion?

There are 10 digits in a billion.

An 11-digit number is a number which has 11 digits, where the first digit should be 1 or greater than 1 and the rest of the digits can be any number between 0-9

4. How many zeros are there in 1 billion?

5. One billion is equal to how many crores?

6. How many commas are there in a billion?

The word "Billion" is used in the International place value system.