Subtraction is the process of taking away a number from another. It is a primary arithmetic operation that is denoted by a subtraction symbol (-) and is the method of calculating the difference between two numbers.

Subtraction is an operation used to find the difference between numbers. When you have a group of objects and you take away a few objects from it, the group becomes smaller. For example, you bought 9 cupcakes for your birthday party and your friends ate 7 cupcakes. Now you are left with 2 cupcakes. This can be written in the form of a subtraction expression: 9 - 7 = 2 and is read as "nine minus seven equals two". When we subtract 7 from 9, (9 - 7) we get 2. Here, we performed the subtraction operation on two numbers 9 and 7 to get the difference of 2.

In mathematics, we have different symbols. The subtraction symbol is one of the important math symbols that we use while performing subtraction. In the above section, we read about subtracting two numbers 9 and 7. If we observe this subtraction: (9 - 7 = 2), the symbol (-) connects the two numbers and completes the given expression. This symbol is also known as the minus sign.

When we subtract two numbers, we use some terms which are used in the subtraction expression:

The subtraction formula is written as: Minuend - Subtrahend = Difference

Let us understand the subtraction formula or the mathematical equation of subtraction with an example. 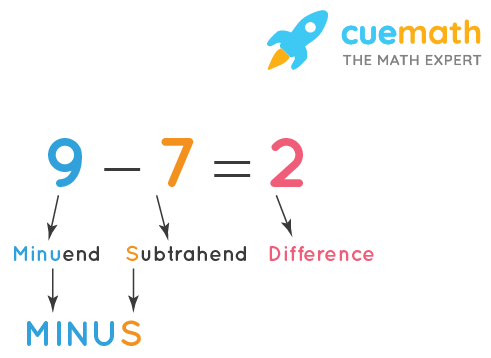 Here, 9 is the minuend, 7 is the subtrahend, and 2 is the difference.

How To Solve Subtraction Problems?

While solving subtraction problems, one-digit numbers can be subtracted in a simple way, but for larger numbers, we split the numbers into columns using their respective place values, like Ones, Tens, Hundreds, Thousands, and so on. While solving such problems we may encounter some cases with borrowing and some without borrowing. Subtraction with borrowing is also known as subtraction with regrouping. When the minuend is smaller than the subtrahend, we use the regrouping method. While regrouping, we borrow 1 number from the preceding column to make the minuend bigger than the subtrahend. Let us understand this with the help of a few examples.

Note: In subtraction, we always subtract the smaller number from the larger number to get the correct answer.

Solution: Follow the given steps and try to relate them with the following figure. 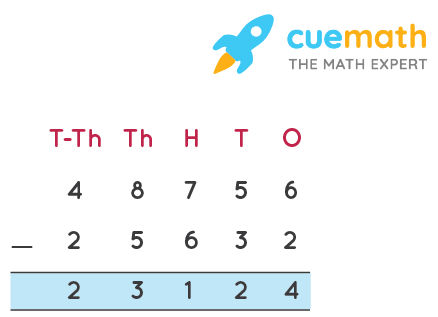 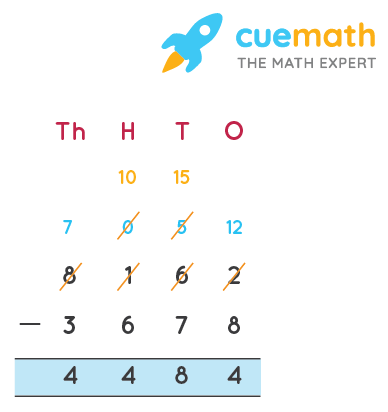 The concept of subtraction is often used in our day-to-day activities. Let us understand how to solve real-life subtraction word problems with the help of an interesting example.

Example: A soccer match had a total of 4535 spectators. After the first innings, 2332 spectators left the stadium. Find the number of remaining spectators.

Therefore, the number of remaining spectators = 2203.

Here are a few important notes that you can follow while performing subtraction in your everyday life.

Check out these interesting articles to know about subtraction and its related topics.

Where Do We Use subtraction?

What Are the Types of Subtraction?

What Are Subtraction Strategies?

Subtraction strategies are different ways in which subtraction can be learned. For example, using a number line, with the help of a Place Value Chart, separating the Tens and Ones and then subtracting them separately, and many others.

Give Some Subtraction Examples.

There can be various real-life examples of subtraction. For example, if you have 5 apples and your friend ate 3 apples. Using subtraction, we can find out the number of remaining apples: 5 - 3 = 2. So, 2 apples are left with you. Similarly, if there are 16 students in a class, out of which 9 are girls, then we can find out the number of boys in the class by subtracting 9 from 16. (16 - 9 = 7). So, we know that there are 7 boys in the class.

What Are the Three Parts of Subtraction?

The 3 parts of subtraction are named as follows:

How Do You Write a Subtraction?

While writing subtraction, the two important symbols are '-' (minus) and '=' (equal to). The minus sign means when one number is being subtracted from the other number. And the equal to sign delivers the final result.