Addition is the process of adding two or more items together. In math, addition is the method of calculating the sum of two or more numbers. It is a primary arithmetic operation that is used commonly in our day-to-day life. One of the most common uses of addition is when we work with money, calculate our grocery bills, or calculate the time.

Addition is an operation used in math to add numbers. The result that is obtained after addition is known as the sum of the given numbers. For example, if we add 2 and 3, (2 + 3) we get the sum as 5. Here, we performed the addition operation on two numbers 2 and 3 to get the sum, i.e., 5.

The addition formula that we use to write an addition fact is addend + addend = sum; where:

There can be multiple addends in an addition fact. The basic addition formula or the mathematical equation of addition can be explained as: 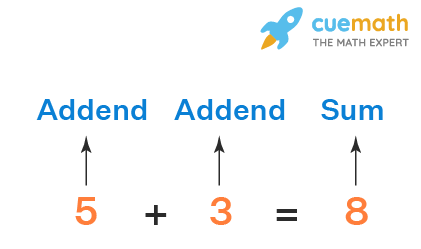 How to Solve Addition Problems?

While solving addition problems, one-digit numbers can be added in a simple way, but for larger numbers, we split the numbers into columns using their respective place values, like ones, tens, hundreds, thousands, and so on. We always start doing addition from the right side as per the place value system. While solving such problems we may come across some cases with carry-overs and some without carry-overs. Let us understand the two processes with help of examples.

Solution: We will follow the given steps and try to relate them with the following figure. 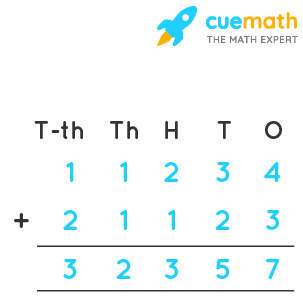 In addition without regrouping, we simply add digits in each place value column and read the respective sums together to get the answer.

While adding numbers, if the sum of the addends is greater than 9 in any of the columns, we regroup it by carrying over the extra digit to the preceding column. In other words, we write only the number in 'ones place digit' in that particular column, while taking the 'tens place digit' to the column to the immediate left. Let us understand how to add two or more numbers by regrouping with the help of an example.

Solution: Let us follow the given steps and try to relate them with the following figure. 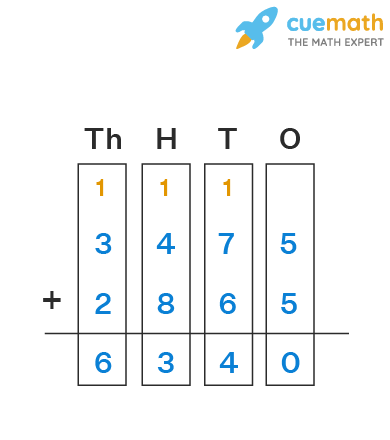 Note: There is an important property of addition which states that changing the order of numbers does not change the answer. For example, if we reverse the addends of the above illustration we will get the same sum as a result (2865 + 3475 = 6340). This is known as the commutative property of addition.

While performing addition we commonly use the properties listed below:

The concept of the addition operation is used in our day-to-day activities. We should carefully observe the situation and identify the solution using the tips and tricks that follows addition. Let us understand how to solve addition word problems with the help of an interesting example.

Here are a few tips and tricks that you can follow while performing addition in your everyday life.

Tips and Tricks on Addition

What is Addition in Math?

Where do we use Addition?

What are the Types of Addition?

What are Addition Strategies?

Addition strategies are the different ways in which addition can be learned. For example, using a number line, with the help of a place value chart, separating the tens and ones and then adding them separately, and many others.

What are the Real-Life Examples of Addition?

There are many addition examples that we come across in our day-to-day lives. Suppose you have 5 apples, and your friend gave you 3 more, after adding 5 + 3, we get 8. So, you have 8 apples altogether. Similarly, suppose there are 16 girls and 13 boys in a class, if we add the numbers 16 + 13, we get the total number of students in the class, which is 29.

What are the Properties of Addition?

The basic properties of addition are given below. Each property has its individual significance based on addition.

What are the Three Parts of Addition?

The 3 parts of addition are the addends, the two signs (plus sign and equal to sign), and the sum.

What is the Identity Property of Addition?

According to the identity property of addition, if 0 is added to any number, the resultant sum is always the actual number. For example, 0 + 16 = 16.

What is the Difference Between Addition and Subtraction?

Addition is a math operation in which we add the numbers together to get their sum. It is denoted by the addition symbol (+). For example, on adding 5 and 7 we get 12. This is represented as, 5 + 7 = 12. Subtraction is the arithmetic operation of calculating the difference between two numbers. It is denoted by the subtraction symbol (-). For example, if we subtract 8 from 19, we get 11. This is represented as 19 - 8 = 11.