Let us see what is the formula for nth term of AP and how to derive it. We also use the formula and solve example problems.

What is nth Term of AP?

As we have discussed earlier, we cannot evaluate each and every term of the AP to determine these specific terms (such as T20, T45, T90, T200, etc). Instead, we must develop a relationship that enables us to find the nth term for any value of n. To do that, consider an AP whose first term is 'a' and the common difference is 'd'. Then its terms are:

Thus, the formula of nth term of ap is,

This relation helps us calculate any term of an AP, given its first term (a) and its common difference (d). 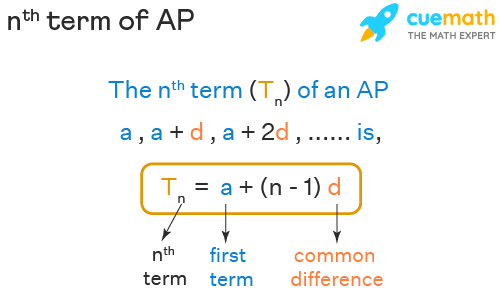 Let us look into more examples.

In the given arithmetic progression,

Hence, the 11th term for the given progression is,

Example 2: If the 5th term of an AP is 40 with a common difference of 6. Find out the arithmetic progression.

The given values for the AP are,

The fifth term can be written as,

Hence, the arithmetic progression is,

Tips and Tricks on nth Term of AP:

FAQs on nth Term of AP

How Do You Find the nth Term of AP?

To find the nth Term of AP,

What is the Formula For the nth Term of an AP?

What is nth Term From Last of an AP?

How Do I Find the First Term From nth Term of AP?

How Do I Find the Common Difference From nth Term of AP?