Money is what we give for buying food, toys, candy, going to the movies, shopping, paying taxes, and renting a house. We give money in return for buying these things or anything. There is a simple trade going on here. Just like a barter system. We want something, we take it. But as a trade/replacement, we give away money for it. there is a fixed price (value of money) given to each and every thing we try to trade (or buy). This is known as an advanced form of barter system. In this chapter, we will learn about money concepts, currency, denomination currency, etc. We also learn currency conversion, how to teach a child to count money and the difference between money and currency.

What is the Concept of Money?

What is the concept of Money? Let us understand it this way; for buying anything we required money, right? So what is money? We can say that money can be used as a medium of exchange such as coins, notes, etc used to pay for services and commodities. We give money in return for anything like chocolates, cake, fruits, food, football, bat, racket, house, or, anything which can be used for selling or buying we exchange money for those things. Money is used in the form of paper or coins, money is usually issued by a government and generally used its face value as a method of payment for things. Economists typically defined money as a widely accepted means of payment. Money is anything that can be easily used for goods and services.

A currency is the system of money used in a country or we can say that a currency is a system of money in common use, especially for people in a nation. Money can be used in any form as a medium of exchange, especially circulating banknotes and coins. Each country has its own value of currency because different types of currencies are used in different countries. U.S. dollars (US$), Euros (€), Japanese Yen (¥), and Pounds Sterling (£) are examples of currencies. 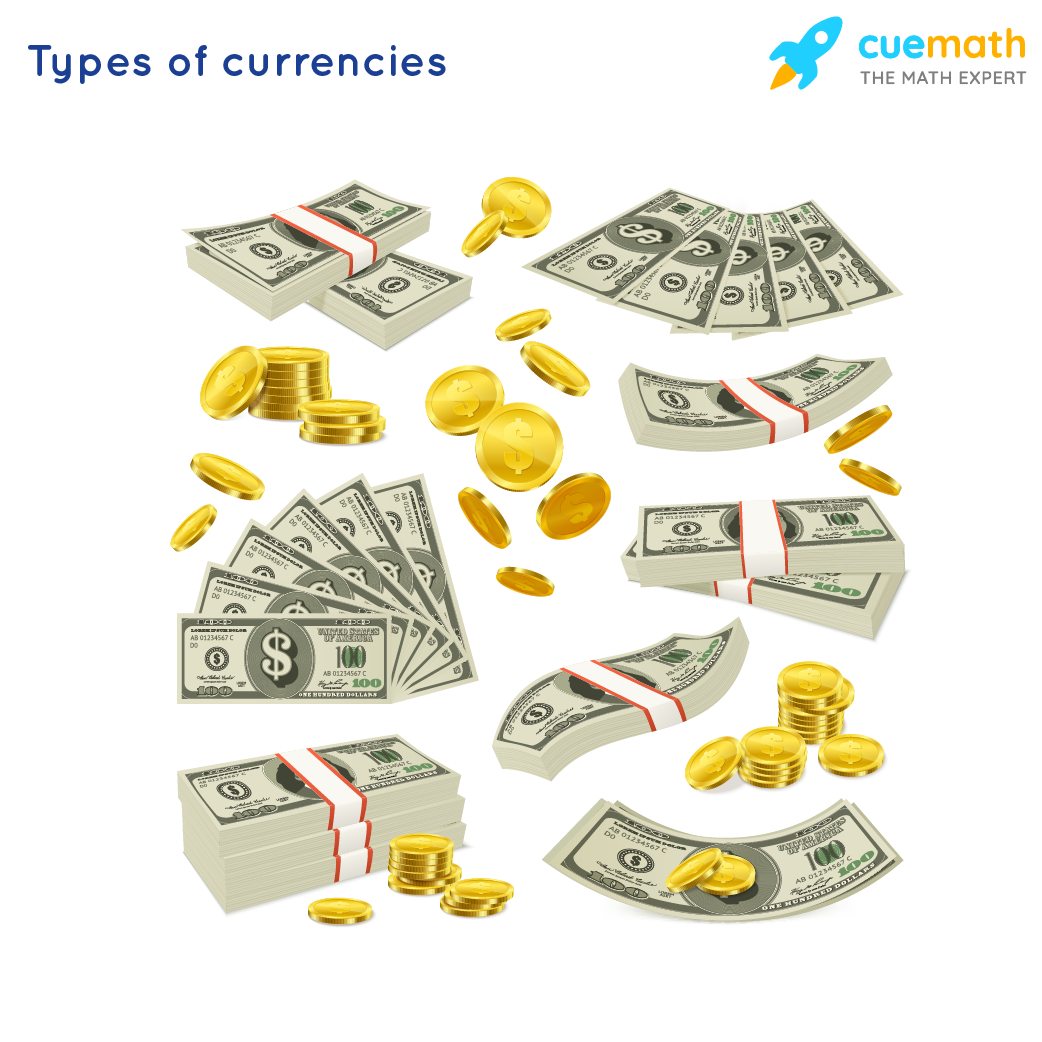 Any small piece of metal which is flat, round, and authorized by a government is known as a coin. It is used primarily as a medium of exchange of money. They may contain some images, numerals, or text on their surface. They are standardized in weight and are produced in large quantities. While on the other hand, bills are currency notes issued by the government. These coins and Bills used in the USA. Given below are some examples of coins and bills individually.

Let us assume, your family is going to visit another country, or you are buying something from the internet from another country, the price of things will be given in a different currency, which will be different from your country's currency and you’ll want to be able to work out how much the item costs in your own currency so that you can make a decision about whether to buy the item or not. Let’s look at an example: If you want to buy a football from any online site in Germany. The cost of football is €25. How much does the football cost in dollars? Now in order to find the value of football in dollars, you need to know the conversion value of Euro to dollars. The following table shows you different values of currencies as compared to a US Dollar (USD).

Who is on the 10 Dollar Bill in US Currency?

Alexander Hamilton is on the 10 dollar bill in US currency.

What is the Highest Denomination of Currency?

Which Denomination is the Smallest in Dollars?

The smallest denomination of the US is the "penny". One penny is 1/100th of a US dollar.

What is Money in Simple Words?

We can say that money can be used as a medium of exchange such as coins, notes, etc used to pay for services and commodities. We give money in return for anything like chocolates, cake, fruits, food, football, bat, racket, house, or, anything which can be used for selling or buying we exchange money for those things.

What is the Importance of Money?

Money is very important in day to day life in order to fulfill our basic requirements. Although money can not be said the most important thing for one to live their life, it is still counted as an essential item for our survival.