In elementary algebra, mathematical expressions are used to mainly denote numbers whereas, in boolean algebra, expressions represent truth values. The truth values use binary variables or bits "1" and "0" to represent the status of the input as well as the output. The logical operators AND, OR, and NOT form the three basic boolean operators. In this article, we will learn more about the definition, laws, operations, and theorems of boolean algebra.

What is Boolean Algebra?

Boolean algebra can be defined as a type of algebra that performs logical operations on binary variables. These variables give the truth values that can be represented either by 0 or 1. The basic Boolean operations are conjunction, disjunction, and negation. The logical operators AND, OR, and NOT are used to represent these operations respectively. Furthermore, these operations are analogous to intersection, union, and complement of sets in set theory. Some of the Boolean algebra rules are:

Let us look at an example,

Boolean algebra expressions are statements that make use of logical operators such as AND, OR, NOT, XOR, etc. These logical statements can only have two outputs, either true or false. In digital circuits and logic gates "1" and "0" are used to denote the input and output conditions. For example, if we write A OR B it becomes a boolean expression. There are many laws and theorems that can be used to simplify boolean algebra expressions so as to optimize calculations as well as improve the working of digital circuits.

There are three basic Boolean algebra operations. These are conjunction, disjunction, and negation. The equivalent logical operators to these operations are given below.

The distributive law says that if we perform the AND operation on two variables and OR the result with another variable then this will be equal to the AND of the OR of the third variable with each of the first two variables. The boolean expression is given as

Thus, OR distributes over AND

If we OR two variables then AND their result with another variable then this value will be equal to the OR of the AND of the third variable with the other two variables. This is given by:

Hence, AND distributes over OR.

According to the associative law, if more than two variables are OR'd or AND'd then the order of grouping the variables does not matter. The result will always be the same. The expressions are given as:

Commutative law states that if we interchange the order of operands (AND or OR) the result of the boolean equation will not change. This can be represented as follows:

Absorption law links binary variables and helps to reduce complicated expressions by absorbing the like variables. There are 4 statements that fall under this law given as:

There are some boolean algebra properties and identities that are given as follows:

One of the most important theorems in boolean algebra is de morgan's theorem. This theorem comprises two statements that help to relate the AND, OR, and NOT operators. The two statements are given as follows:

A logic gate is a building block for any digital circuit. These logic gates need to make the decision of combining various inputs according to some logical operation and produce an output. Logic gates perform logical operations based on boolean algebra. Suppose we have two inputs A and B. Let the output be R. Then given below are the various types and symbols of logic gates.

AND gate - R = A.B will be the boolean expression. R will be true if both A AND B are true. NOT gate - This is also known as an inverter and the boolean equation is R = \(\overline{A}\). This implies that the output is true only if the input is false. NOR gate - The NOT - OR operation results in the NOR gate. R = \(\overline{A + B}\) denotes the boolean equation and implies that R is true if A and B are NOT true. EX - OR gate - This is the exclusive OR gate. It can be created by using a combination of the above-mentioned gates. R = A ⊕ B is the boolean expression. It means that R is true only if either A or B is true. EX - NOR gate - The boolean equation of the exclusive NOR gate is given as R = \(\overline{A ⊕ B}\). It means R is true only if both inputs are either true or false. 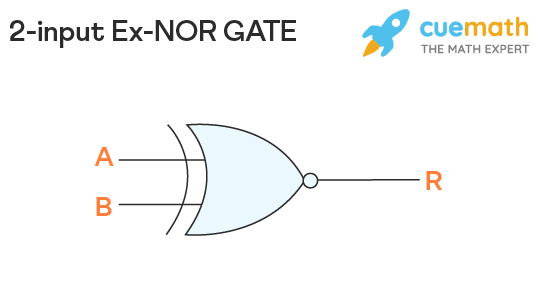 Boolean algebra truth table can be defined as a table that tells us whether the boolean expression holds true for the designated input variables. Such a truth table will consist of only binary inputs and outputs. Given below are the truth tables for the different logic gates.

What is Meant by Boolean Algebra?

Boolean algebra is a type of algebra where the input and output values can only be true (1) or false (0). Boolean algebra uses logical operators and is used to build digital circuits.

What are the Boolean Algebra Rules?

The basic boolean algebra rules are:

What are the Boolean Algebra Laws?

There are four main laws of boolean algebra. These are distributive law, associative law, commutative law, and absorptive law. When we simplify boolean expression these laws are extensively used.

What are the Identities of Boolean Algebra?

The important boolean algebra identities are given below:

How Do you Do Boolean Algebra?

When solving a boolean algebra expression the most important thing is to remember the boolean algebra laws, theorems, and associated identities. We need to consecutively apply these rules until the expression cannot be simplified further to get our answer.

What is the Distributive Law in Boolean Algebra?

What is Absorption Law in Boolean Algebra?

The boolean algebra equations for the absorption law that help to link like variables are as follows:

How to Simplify Boolean Algebra Expressions?

We can simplify boolean algebra expressions by using the various theorems, laws, postulates, and properties. In the case of digital circuits, we can perform a step-by-step analysis of the output of each gate and then apply boolean algebra rules to get the most simplified expression.

What are the Properties of Boolean Algebra?

Boolean algebra has three basic properties, they are: