A Venn diagram is used to visually represent the differences and the similarities between two concepts. Venn diagrams are also called logic or set diagrams and are widely used in set theory, logic, mathematics, businesses, teaching, computer science, and statistics.

Let's learn about Venn diagrams, their definition, symbols, and types with solved examples. 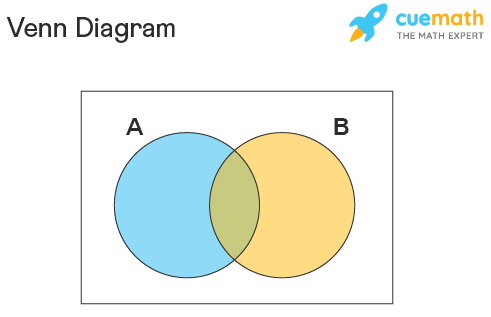 Let us observe a Venn diagram example. Here is the Venn diagram that shows the correlation between the following set of numbers. 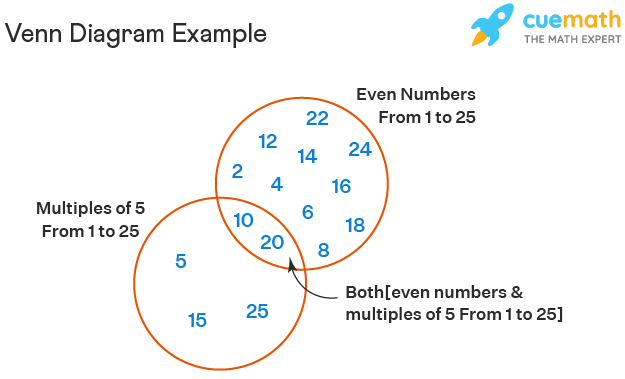 Let us understand the following terms and concepts related to Venn Diagram, to understand it better.

Whenever we use a set, it is easier to first consider a larger set called a universal set that contains all of the elements in all of the sets that are being considered. Whenever we draw a Venn diagram: 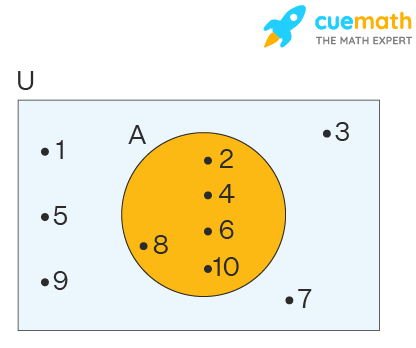 Venn diagrams are used to show subsets. A subset is actually a set that is contained within another set. Let us consider the examples of two sets A and B in the below-given figure. Here, A is a subset of B. Circle A is contained entirely within circle B. Also, all the elements of A are elements of set B. 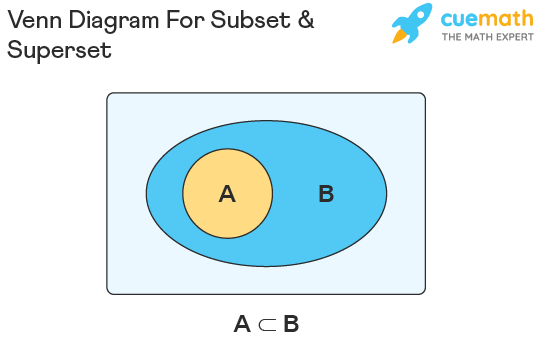 This relationship is symbolically represented as A ⊆ B. It is read as A is a subset of B or A subset B. Every set is a subset of itself. i.e. A ⊆ A. Here is another example of subsets :

There are more than 30 Venn diagram symbols. We will learn about the three most commonly used symbols in this section. They are listed below as:

Let us understand the concept and the usage of the three basic Venn diagram symbols using the image given below. 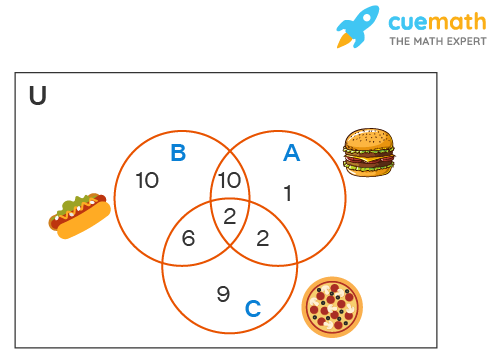 In set theory, we can perform certain operations on given sets. These operations are as follows,

We can observe the above-explained operations on sets using the figures given below, 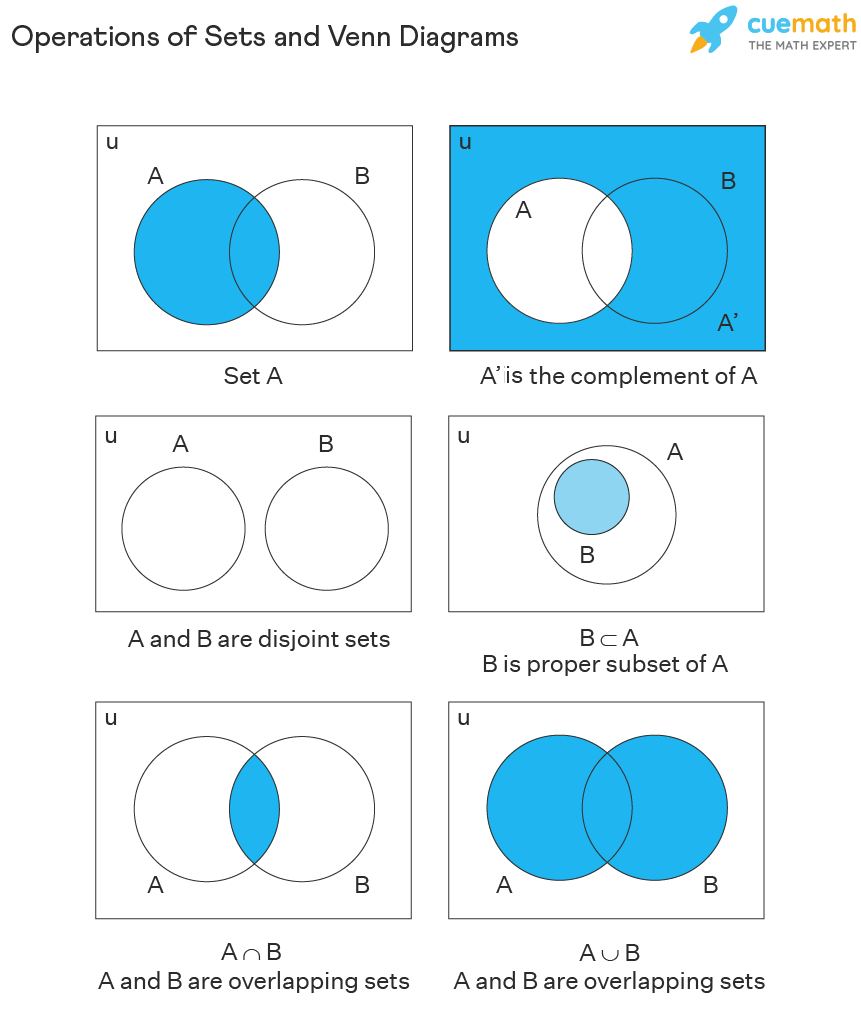 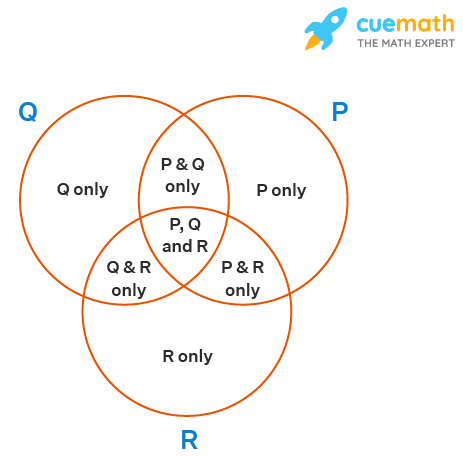 Here are some important observations from the above image:

How to Draw a Venn Diagram?

Venn diagrams can be drawn with unlimited circles. Since more than three becomes very complicated, we will usually consider only two or three circles in a Venn diagram. Here are the 4 easy steps to draw a Venn diagram: 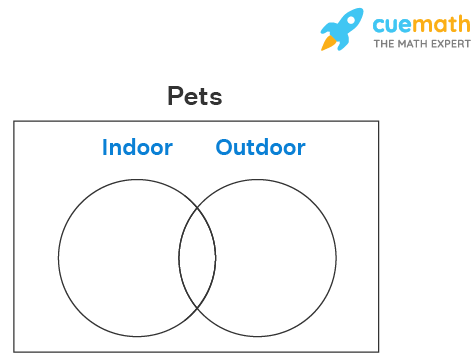 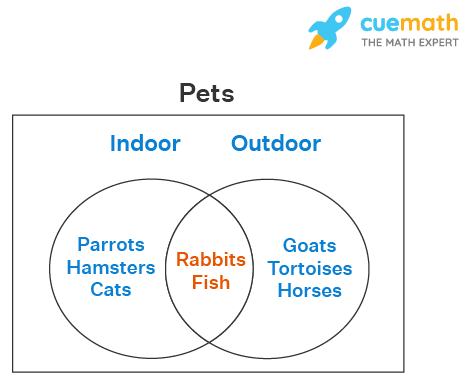 For any two given sets A and B, the Venn diagram formula is used to find one of the following: the number of elements of A, B, A U B, or A ⋂ B when the other 3 are given. The formula says:

Here is an example of Venn diagram formula.

Let A and B be the sets of players who like bowling and batting respectively. Then

We have to find n(A U B). Using the Venn diagram formula,

There are several advantages to using Venn diagrams. Venn diagram is used to illustrate concepts and groups in many fields, including statistics, linguistics, logic, education, computer science, and business.

Check out the following pages related to Venn diagrams:

Here is a list of a few points that should be remembered while studying Venn diagrams:

What is a Venn Diagram in Math?

In math, a Venn diagram is used to visualize the logical relationship between sets and their elements and helps us solve examples based on these sets.

How do You Read a Venn Diagram?

These are steps to be followed while reading a Venn diagram:

What is the Importance of Venn Diagram?

Venn diagrams are used in different fields including business, statistics, linguistics, etc. Venn diagrams can be used to visually organize information to see the relationship between sets of items, such as commonalities and differences, and to depict the relations for visual communication.

What is the Middle of a Venn Diagram Called?

How to Represent a Universal Set Using Venn Diagram?

What are the Different Types of Venn Diagrams?

The different types of Venn diagrams are:

What are the Different Fields of Applications of Venn Diagrams?

Can a Venn Diagram Have 2 Non Intersecting Circles?

Yes, a Venn digram can have two non intersecting circles where there is no data that is common to the categories belonging to both circles.

What is the Formula of Venn Diagram?

Can a Venn Diagram Have 3 Circles?

Yes, a Venn diagram can have 3 circles, and it's called a three-set Venn diagram to show the overlapping properties of the three circles.

What is Union in the Venn Diagram?

A union is one of the basic symbols used in the Venn diagram to show the relationship between the sets. A union of two sets C and D can be shown as C ∪ D, and read as C union D. It means, the elements belong to either set C or set D or both the sets.

What is A ∩ B Venn Diagram?

A ∩ B (which means A intersection B) in the Venn diagram represents the portion that is common to both the circles related to A and B.  A ∩ B can be a null set as well and in this case, the two circles will either be non-intersecting or can be represented with intersecting circles having no data in the intersection portion.