An equation is a mathematical statement with an 'equal to' symbol between two expressions that have equal values. For example, 3x + 5 = 15. There are different types of equations like linear, quadratic, cubic, etc. Let us learn more about equations in math in this article.

Equations are mathematical statements containing two algebraic expressions on both sides of an 'equal to (=)' sign. It shows the relationship of equality between the expression written on the left side with the expression written on the right side. In every equation in math, we have, L.H.S = R.H.S (left hand side = right hand side). Equations can be solved to find the value of an unknown variable representing an unknown quantity. If there is no 'equal to' symbol in the statement, it means it is not an equation. It will be considered as an expression. You will learn the difference between equation and expression in the later section of this article.

Look at the following examples. These will give you an idea of the meaning of an equation in math.

Now, let us move forward and learn about parts of an equation in math.

Parts of an Equation

There are different parts of an equation which include coefficients, variables, operators, constants, terms, expressions, and an equal to sign. When we write an equation, it is mandatory to have an "=" sign, and terms on both sides. Both sides should be equal to each other. An equation doesn't need to have multiple terms on either of the sides, having variables, and operators. An equation can be formed without these as well, for example, 5 + 10 = 15. This is an arithmetic equation with no variables. As opposed to this, an equation with variables is an algebraic equation. Look at the image below to understand the parts of an equation. 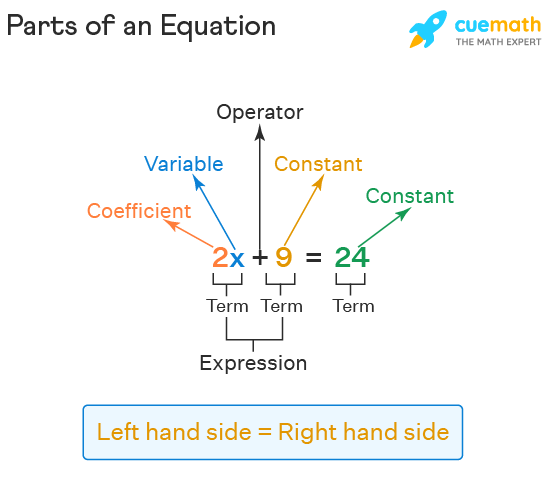 How to Solve an Equation?

An equation is like a weighing balance with equal weights on both sides. If we add or subtract the same number from both sides of an equation, it still holds. Similarly, if we multiply or divide the same number into both sides of an equation, it still holds. Consider the equation of a line, 3x − 2 = 4. We will perform mathematical operations on the LHS and the RHS so that the balance is not disturbed. Let's add 2 on both sides to reduce the LHS to 3x. This will not disturb the balance. The new LHS is 3x − 2 + 2 = 3x and the new RHS is 4 + 2 = 6. So, the equation becomes 3x = 6. Now, let's divide both sides by 3 to reduce the LHS to x. Thus, the solution of the given equation of a line is x = 2.

The steps to solve a basic equation with one variable (linear) are given below:

Based on the degree, equations can be classified into three types. Following are the three types of equations in math:

Equations with degree 2 are known as quadratic equations. The standard form of a quadratic equation with variable x is ax2 + bx + c = 0, where a ≠ 0. These equations can be solved by splitting the middle term, completing the square, or by the discriminant method.

Equations with degree 3 are known as cubic equations. Here, 3 is the highest exponent of at least one of the terms. The standard form of a cubic equation with variable x is ax3 + bx2 + cx + d = 0, where a ≠ 0.

Expressions and equations in math are used simultaneously in algebra, but there is a major difference between the two terms. When 2x + 4 is an expression, 2x + 4 = 0 is considered an equation. Let us understand the basic difference between equation and expression through the table given below:

Important Notes on Equations in Math:

Check these interesting articles related to the concept of equations in math.

Practice Questions on Equation in Math

What is an Equation in Math?

An equation in math is an equality relationship between two expressions written on both sides of the equal to sign. For example, 3y = 16 is an equation.

What is a Linear Equation?

What is a Quadratic Equation?

How Equations are Used in Real Life?

In real life, there are many situations in which equations can be used. Whenever an unknown quantity has to be found, an equation can be formed and solved. For example, if the cost of 1 pencil is $1.2, and the total money spent by you on pencils is $9.6, the number of pencils bought can be found by forming an equation based on the given information. Let the number of pencils bought be x. Then, the equation will be 1.2x = 9.6, which can be solved as x = 8.

How to Solve Quadratic Equations?

Quadratic equations in one variable can be solved using the following methods:

What are the 3 Types of Equation?

Based on the degree, equations can be classified into the following three types:

What Equation Has No Solution?

What is the Equation of a Circle?