Here, in the term xn, 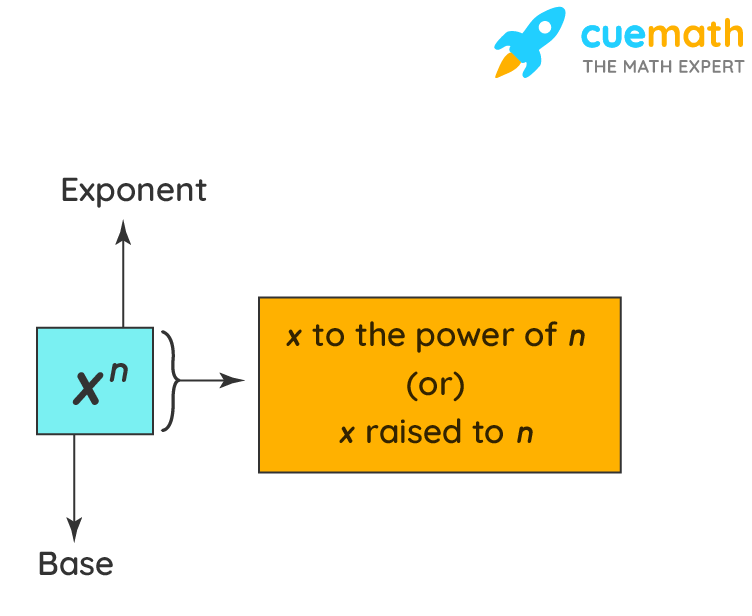 Some examples of exponents are as follows:

If an exponent of a number is a fraction, it is known as a fractional exponent. Square roots, cube roots, nth root are parts of fractional exponents. Number with power 1/2 is termed as the square root of the base. Similarly, a number with a power of 1/3 is called the cube root of the base. Some examples of exponents with fractions are 52/3, -81/3, 105/6, etc. We can write these as:

If an exponent of a number is given in the decimal form, it is known as a decimal exponent. It is slightly difficult to evaluate the correct answer of any decimal exponent so we find the approximate answer for such cases. Decimal exponents can be solved by first converting the decimal in fraction form. For example, 41.5 can be written as 43/2 which can be simplified further to get the final answer 8. i.e., 43/2 = (22)3/2 = 23 = 8.

To learn more about the use of exponents in writing scientific notation of numbers, visit the following articles:

Check a few more interesting articles based on the exponents in math.

What are Exponents in Math?

An exponent is a number that is placed as a superscript over a number. In other words, it indicates that the base is raised to a certain power. The exponent is also called by other names like index and power. If m is a positive number and n is its exponent, then mn means m is multiplied by itself n times.

What are the Properties of Exponents?

What are the Examples of Exponents?

Some examples of exponents are as follows:

How do Exponents Relate to Real Life?

In real life, we use the concept of exponents to write numbers in a simplified manner and in a short way. Repeated multiplication can be easily written with the help of exponents. Also, we use exponents to write larger numbers, for example, the distance of the moon from earth, the number of bacteria present on a surface, etc.

How to Add Exponents?

Exponents cannot be added. We can only add like terms (terms having the same exponent and same variable). But, in the case of the multiplication of terms with the same variables, we add the exponents of the variable to multiply. For example, x2 × x4 = x(2+4) = x6. Try Cuemath's adding exponents calculator and get your answers quickly and easily.

Why are Exponents Important?

How to Multiply Exponents?

What is the use of the Properties of Exponents?

What are the Real-Life Applications of Exponents?

How are Laws of Exponents Used in Algebra?

How are Negative Exponents Used in Real Life?

Negative exponents are used in writing very small numbers in real life, which means numbers having values between 0 to 1.

What is a Zero Exponent?

Zero exponent means numbers that have 0 as their exponent. The values of those numbers are always 1. Any number with 0 as its exponent is equal to 1.