Decimals are used to express the whole number and fraction together. Here, we will separate the whole number from the fraction by inserting a ".", which is called a decimal point. For example, let's say you are going to take a cone of ice cream. The vendor tells you that the price of ice cream is $2 and 50 cents. Now, if you want to express this amount in one figure, you will say that the price of the ice cream cone is $2.50. There are many such real-life situations in which you might be using decimals without even realizing it.

Decimals are a set of numbers lying between integers on a number line. They are just another way to represent fractions in mathematics. With the help of decimals, we can write more precise values of measurable quantities like length, weight, distance, money, etc. The numbers to the left of the decimal point are the integers or whole numbers and the numbers to the right of the decimal point are decimal fractions. If we go right from ones place, the next place will be (1/10) times smaller, which will be (1/10)th or tenth place value. For an instance, observe the place value chart of decimals given below for the number 12.45. 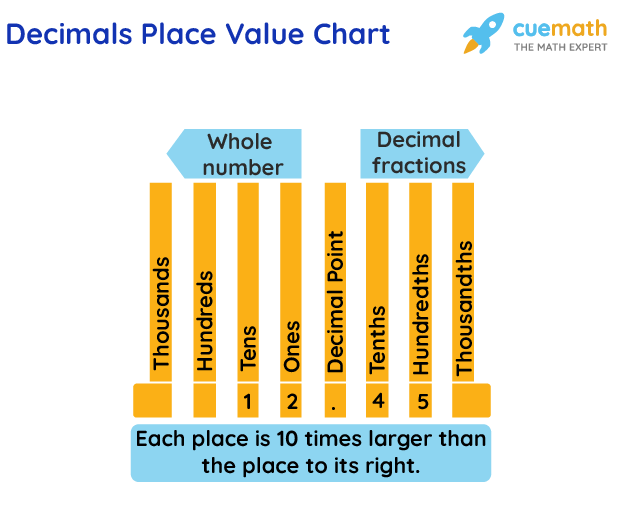 In the case of decimals, for the whole number part, the place value system is the same as the whole number. But after the decimal point, there is a different world of numbers going on in which we use decimal fractions to represent the value. When we are going towards the left, each place is ten times greater than the previous place value. So, to the right of ones place, we have tenths (1/10) and to the right of tenths, we have hundredths (1/100), and so on. Let us look at some examples of decimal place values for more clarity. The place values of each digit of the numbers 73.789, 8.350, and 45.08 are shown.

Reading Decimal Numbers: There are two ways to read a decimal number. The first way is to simply read the whole number followed by "point", then to read the digits in the fractional part separately. It is a more casual way to read decimals. For example, we read 85.64 as eighty-five point six-four. The second way is to read the whole number part followed by "and", then to read the fractional part in the same way as we read whole numbers but followed by the place value of the last digit. For example, we can also read 85.64 as eighty-five and sixty-four hundredths.

As we can observe, the place values are clearly marked along with the face values of each of the digits of the number 23.758. So, the expanded form of 23.758 can be expressed in the following way:

Rounding Decimals to the Nearest Tenths

Rounding a decimal number to the nearest tenths is done by taking the digit at the hundredth place into consideration. The digit in this hundredth place can have two variations. First, if that number is 4 or less, just remove all the digits to the right of the tenth place digit and the remaining portion is our desired result. But if the digit at the hundredths place is 5 or greater, we need to increase the tenths place digit by 1, and then remove all the digits on the right of the tenths place digit.

Check this article to know more about "Rounding Decimals".

Decimals can be divided into different categories depending upon what type of digits occur after the decimal point. It will depend upon whether the digits are repeating, non-repeating, or terminating. Let us have a look at how the decimals are categorized based on their type here.

► Interesting Facts and Notes on Decimals

Below given are some interesting facts and notes on decimals. This will help you in understanding the topic faster.

Check these interesting articles related to the concept of decimals in math.

What is a Non-Decimal Number?

All integers without any fractional part are non-decimal numbers. For representing these we do not use a decimal point. Also, there is no tenths place or hundredths place in these numbers. For example, 34, 5637, 8765 etc.

How to Read Decimals?

Read the whole number part followed by "and", then read the fractional part in the same way as we read whole numbers but followed by the place value of the last digit. For example, 12.87 is "twelve and eighty-seven hundredth".

Every integer can be represented in the form of decimals. For example, 12 is an integer that can be represented as 12.00. But decimals are not integers as integers are not in the form of p/q. By default, an integer can be considered as a decimal. For performing arithmetic operations involving integers and decimals, the integers are to be converted as decimals. For the addition of 4 to 3.36, we convert 4 to 4.00.

Why do We Use Decimals?

Decimals are used to make our calculations easy. We use them to quickly compare fractions without doing many calculations. For example, comparing (675/63) with (463/77) can be very time-consuming. Instead, we write them as decimals 10.71 and 6.01 and compare easily and determine which one is greater than the other. We also use them to shorten the complicated fractional equations. We use decimals every day while dealing with money, weight, length, etc. Decimal numbers are also used in situations where more precision is required which whole numbers or fractions cannot provide.

How to Round Decimals?

To round a decimal number look at the next digit to the right side of the place up to which we want to round off. If the digit is less than 5, round down and if the digit is 5 or more than 5, round up the digit at its left. For example, the decimal 3.284 can be rounded to the nearest hundredths as 3.28.

What are Repeating and Non-Repeating Decimals?

How do you Write in Decimals?

Let us see how to represent 1/4 in decimals. Here, multiply the numerator and the denominator with 25, to obtain 100 in the denominator. Further, we need to convert this fraction with a denominator of 100 to a decimal by shifting the decimal point to two places towards the left.