A fraction shows part of a whole. This whole can be a region or a collection. The word fraction is derived from the Latin word "fractio" which means 'to break'. The Egyptians, being the earliest civilization to study fractions, used fractions to resolve their mathematical problems, which included the division of food, supplies, and the absence of a bullion currency.

In Ancient Rome, fractions were only written using words to describe a part of the whole. In India, the fractions were first written with one number above another (numerator and denominator), but without a line. It was the Arabs only, who added the line which is used to separate the numerator and the denominator.

In Mathematics, fractions are represented as a numerical value, which defines a part of a whole. A fraction can be a portion or section of any quantity out of a whole, where the whole can be any number, a specific value, or a thing. Let us understand this concept using an example. The following figure shows a pizza that is divided into 8 equal parts. Now, if we want to express one selected part of the pizza, we can express it as 1/8 which shows that out of 8 equal parts, we are referring to 1 part.

It means one in eight equal parts. It can also be read as: 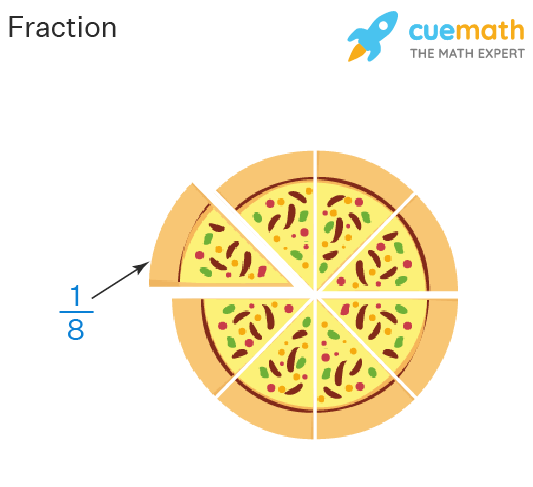 If we select 2 parts of the pizza, it will be expressed as 2/8. Similarly, if we are referring to 6 parts of this pizza, we would write it as 6/8 as a fraction.

Parts of a Fraction

All fractions consist of a numerator and a denominator and they are separated by a horizontal bar known as the fractional bar.

Based on the numerator and denominator, which are parts of a fraction, there are different types of fractions as listed below:

An improper fraction is the type of fraction in which the numerator is more than or equal to its denominator. It is always the same or greater than the whole. For example, 4/3, 5/2, 8/5, and so on.

Example: Find the two fractions that are equivalent to 5/7.

Fraction on a Number Line

What are Fractions in Math?

Fractions in Math, represent a numerical value that expresses a part of a whole. The whole can be any number, a specific value, or a thing. Fractions are represented in the form of p/q. For example, ¼, ½, ¾, and so on.

What are the Different Types of Fractions?

Fractions are classified on the following basis:

How Many Parts are there in a Fraction?

A fraction has two parts, the numerator and the denominator.

How are Fractions and Decimals Related?

Fractions and decimals are different ways to represent numbers. Fractions are written in the form of p/q, where q≠0, for example, 3/5; while in decimals, the whole number part and fractional part is connected with a decimal point, for example, 3.56. A fraction can be converted to a decimal if we divide the given numerator by the denominator. Similarly, to convert a decimal into a fraction, we write the given decimal as the numerator, we place a fractional bar below it. Then, we place 1 right below the decimal point followed by the number of zeros required accordingly. Then, this fraction can be simplified. For example, if we need to convert 0.5 to a fraction, we place 10 in the denominator and remove the decimal point which makes it 5/10. After reducing the fraction, we get (5 ÷ 5) / (10 ÷ 5) = 1/2.

How do you Simplify Fractions?

How to Multiply Fractions?

How to Divide Fractions?

What do you Call Fractions with the Same Denominator?

How do you Determine Which Fraction is Greater?

To determine the greater fraction, we first need to check if the given fractions are like fractions. For this, we need to compare the denominators.

Are All Fractions Less Than 1?

No, all fractions are not less than 1.

How to Add Fractions with Different Denominators?

In order to add fractions with different denominators, we need to use the following steps. Let us add the fractions 4/5 + 6/7

How to Multiply Fractions with Whole Numbers?

What is Comparing Fractions?