Comparing fractions means determining the larger and the smaller fraction among two parts. In our day-to-day life, we often get stuck with situations where we have to compare two or more fractions. Did you know that you deal with a fraction every time you slice an apple into two parts? We often use fractions without realizing it. Let us learn about fractions and their comparison today!

How to Compare Fractions?

What is a Fraction?

Before exploring the concept of comparing fractions, let us recall fractions. A fraction is nothing but a part of a whole thing. If you break a glass dish into several pieces, can you still say that each part represents a fraction? Yes, reasonably each part can still be called a fraction of the glass dish, but in math, a fraction comes with a rule. The rule is "each of the parts has to be equal." A fraction has two parts; they are called numerator and denominator.

Comparing Fractions with Unlike Denominators

We can use various graphical methods and models to visualize larger fractions. Model A and B represent the given respective fractions. 4/8 < 4/6 because 4/6 covers a larger shaded area than 4/8. Note that the smaller fraction occupies a lesser area of the same whole. A point to be taken into consideration here is that the size of models A and B should be exactly the same for the comparison to be valid. Each model is then divided into equal parts equivalent to their respective denominators. 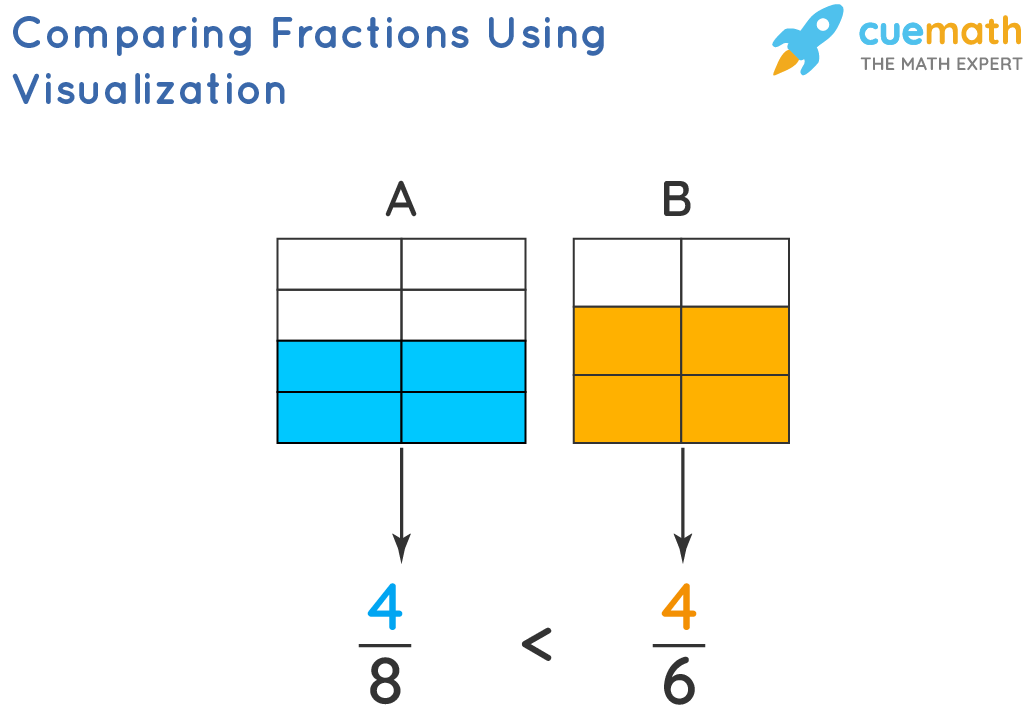 In this method, we cross multiply the numerator of one fraction with the denominator of the other fraction. The same has been indicated by the arrows in the figure below. In the example given below, when we cross multiply, we get 4 and 6. 4 and 6 are the numerators we would get if we expressed 1/2 and 3/4 with the common denominator 8. The new fractions with the same denominators will be 4/8 and 6/8. Since 6 is a greater numerator, 4/8 < 6/8. Therefore, 1/2 < 3/4 The common methods used to compare fractions are:

What does Comparing Fraction Mean?

Comparing fractions means comparing the given fractions in order to tell if one fraction is less than, greater than, or equal to another. Like whole numbers, we can compare fractions as well using the same symbols: <,> and =.

What is the Rule of Comparing Fractions with the Same Denominator?

What is the Rule when Comparing Fractions with the Same Numerator?

What are Equivalent Fractions?

What is the Easiest Way of Comparing Fractions?

Why do we Need to Compare Fractions?

Comparing fractions is an important component, which helps students develop their number sense about fraction size. This helps them realize that the strategies they use to compare whole numbers do not necessarily compare fractions For example, 1/4 is greater than 1/8 even though the whole number 8 is greater than 4.