A decimal number system is used to express the whole number and fraction together. Here, we will separate the whole number from the fraction by inserting a ".", which is called a decimal point. And a fraction represents a value in the form of a/b. There is a close relationship between decimals and fractions. To convert any decimal number to a fraction, we ignore the decimal point and divide the number by the place value of the last digit in the fractional part of the number. Then we simplify the fraction so obtained. The decimals and fractions can be conveniently interchanged to each other. 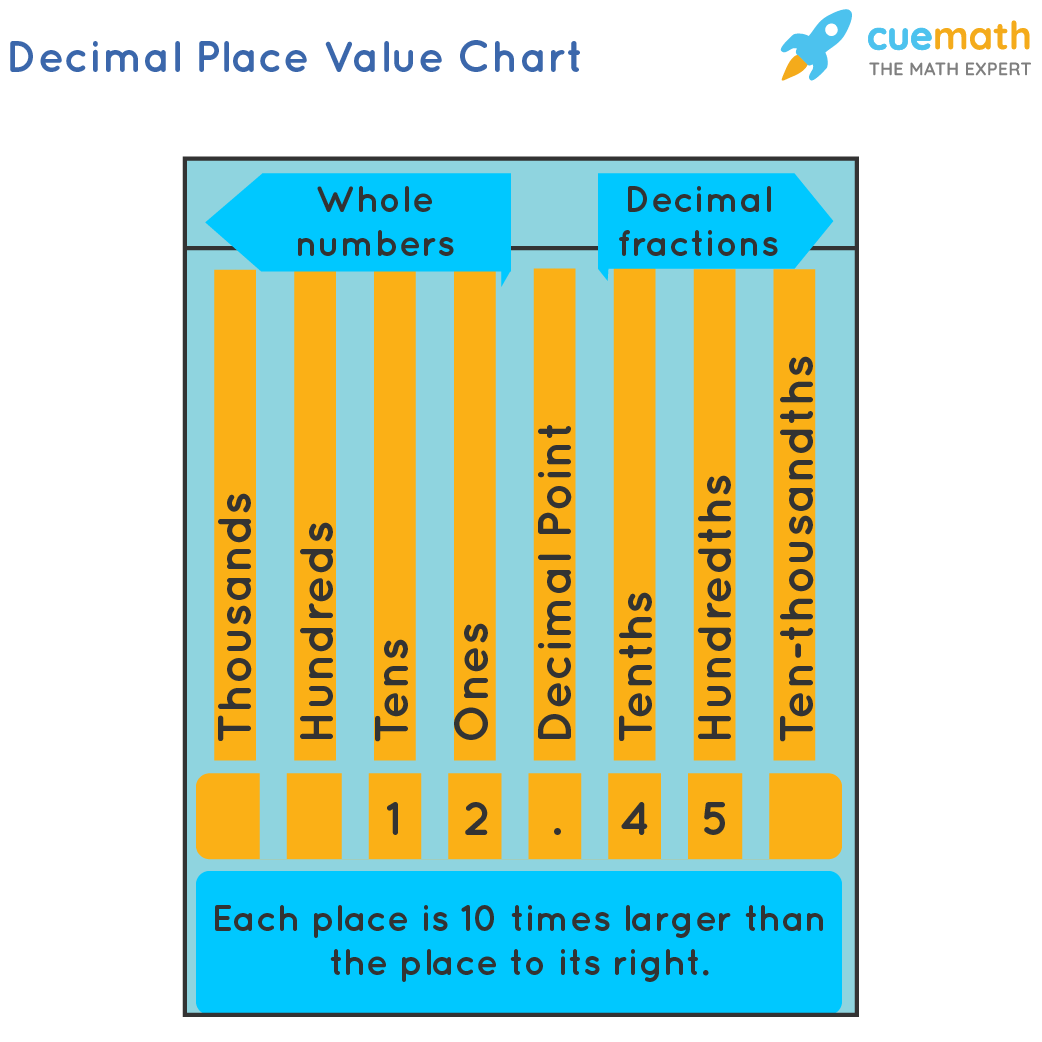 In the case of decimals, for the whole number part, the place value system is the same as the whole number. But after the decimal point, there is a different world of numbers going on in which we use decimal fractions to represent the value. When we are going towards the left, each place is ten times greater than the previous place digit. So, to the right of one's place, we have tenths (1/10) and to the right of tenths, we have hundredths (1/100) and so on. Let us look at some examples for more clarity.

Reading Decimal Numbers: There are two ways to read a decimal number. The first way is to simply read the whole number followed by "point", then to read the digits in the fractional part separately. It is a more casual way to read decimals. For example, we read 34.56 as thirty-four point fifty-six. Look at one more example given below:

We can represent decimal numbers using Base-10 blocks (flats, rods, and blocks). A flat represents one whole unit, a rod one-tenth of the whole, and a block one-hundredth of the whole. So, if want to visualize the number 24.69, it means we have 24 whole units, that we can further represent in the form of 2 cubes and 4 flats; 6 rods (represents tenths) and 9 blocks (represents hundredths). 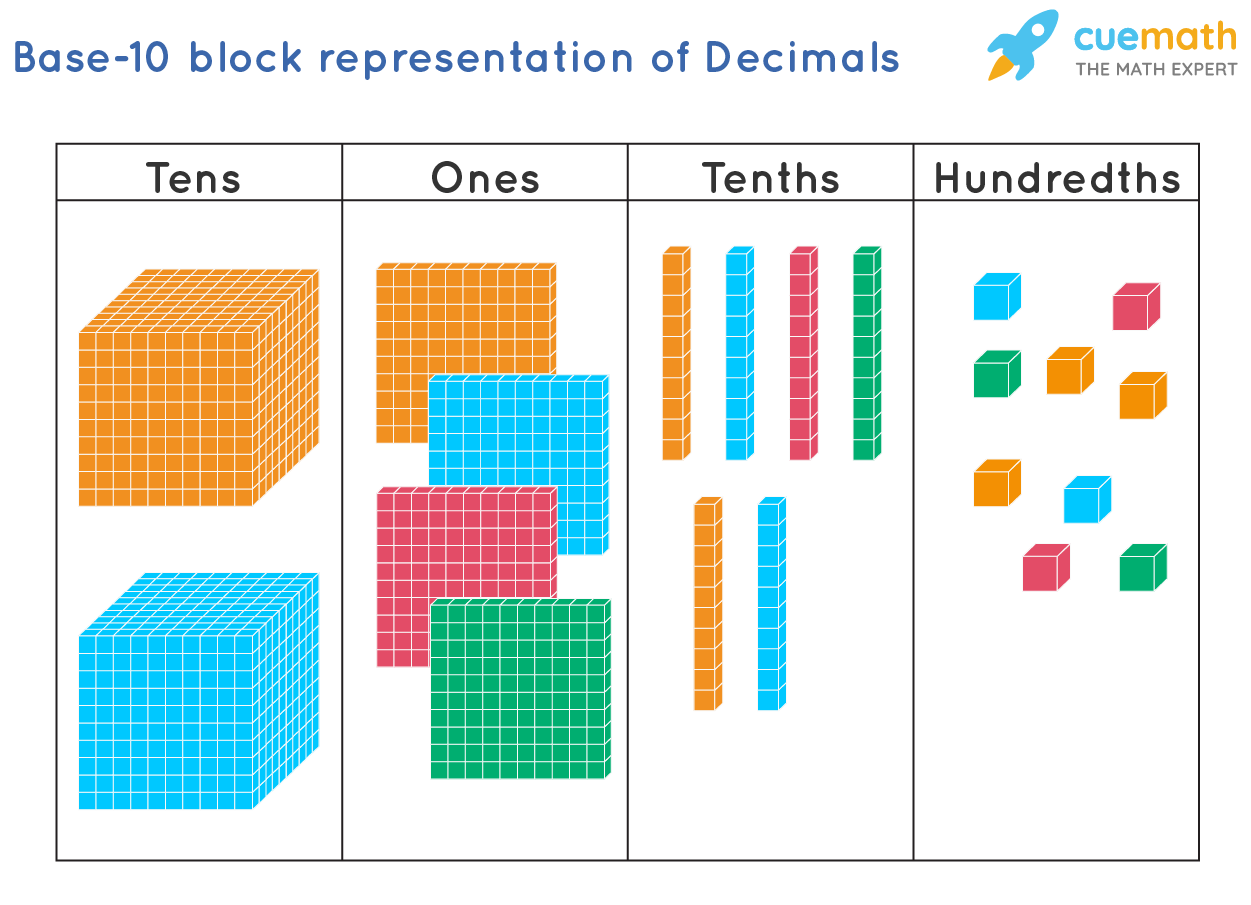 Another way of representing decimal numbers is on the abacus. 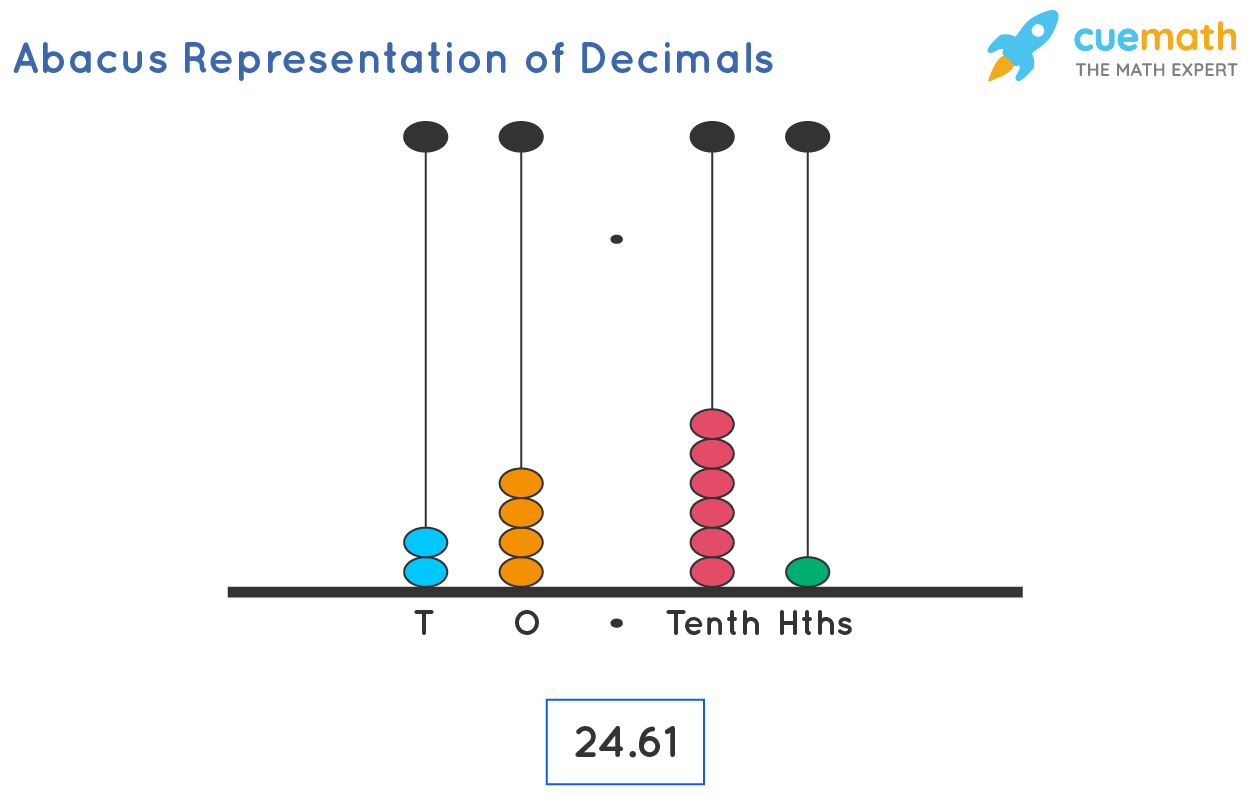 Like fractions, every decimal number can be expressed in the form of a percentage. There is a need to convert decimals to percentages when we compare two or more numbers. For example, who scored better if Sandra got 20.5 out of 40 and Kim got 22.25 out of 45 marks? The process to convert a decimal to a percentage, is through two simple steps. First, multiply the given decimal number with hundred and this moves the decimal by two places towards the right. Further, attach a percentage symbol(%).

Similarly, we can convert a percentage to a decimal. First, divide the given percentage number with 100 and remove the decimal symbol. Further simplify the fraction with the 100 in the denominator, to a decimal.

There is a great significance of decimals in everyday life while calculating exact values of money, weight, temperature, length, distance, etc. With the help of decimals, we can represent a part of a unit. Also, very small numeric values can be expressed as a decimal. Examples of a decimal are 0.33387, 0.4897, 0.3398, 0.00001, 0.4597,..... Also, we can say that for counting we need whole numbers but for measuring we need decimals.

Further, we need decimals to be more precise in our calculations in everyday life. For example, Can you fit a table of size 80.3 inches in the given space of 80 inches? The answer for this would be a clear NO. Casually, we say that \(80.3\) is approximately equal to \(80\). But, here, we need to consider the exact measurement in terms of decimal, i.e., 80.3 inches.

Solved Examples on Decimals and Fractions

Practice Questions on Decimals and Fractions

FAQs on Decimals and Fractions

How to Read Decimals?

Read the whole number part followed by "and", then read the fractional part in the same way as we read whole numbers but followed by the place value of the last digit. The decimal number is always read as individual digits. As an example, we would read a decimal number of 145.367 as one hundred and forty-five point three six seven.

How to Turn Decimals Into Fractions?

To convert a decimal to a fraction, we follow three basic steps mentioned below:

How to Round Decimals?

What Are Repeating and Non-Repeating Decimals?

What Is the Relation Between Decimal and Percentage?

Let us see how to represent 1/4 in decimals. Here multiply the numerator and the denominator with a 25, to obtain a 100 in the denominator. Further, we need to convert this fraction with a denominator of 100, as a decimal.