What is Recurring Decimal?

A decimal in which to the right of the decimal, a particular digit or sequence of digits repeats itself indefinitely is called as recurring or repeating decimals. It refers to the decimal representation of a number whose digits are periodic (repeating its values at regular intervals) and the infinitely repeated portion is not zero. 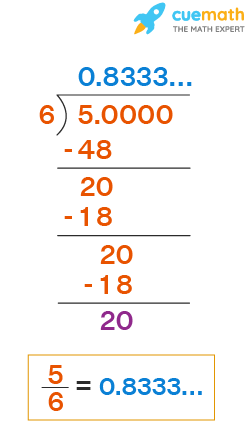 What Are Recurring and Non-recurring Decimals?

How Do You Show a Decimal is Recurring?

A decimal number is considered recurring if a digit (or group of digits) repeats forever after the decimal point. The part that repeats can be shown either by placing dots over the first and last digits of the repeating pattern or by a bar over the pattern.

What Is a Recurring Decimal Called?

A recurring decimal, as the name suggests is called a repeating decimal, as its decimal representation eventually becomes periodic. In other words, the same sequence of digits to the right of decimal repeats indefinitely.

What Is the Difference Between Recurring and Terminating Decimals?

What Do You Mean By a Non-Terminating Recurring Decimal?

How Do You Express Recurring Decimals As Rational Numbers?