Long Division is a method for dividing large numbers, which breaks the division problem into multiple steps following a sequence. Just like the regular division problems, the dividend is divided by the divisor which gives a result known as the quotient, and sometimes it gives a remainder too. This lesson will give you an overview of the long division method.

What Is Long Division?

In Math, long division is a method for dividing large numbers into steps or parts, breaking the division problem into a sequence of easier steps. It is the most common method used to solve problems based on division. Observe the following division to see the divisor, the dividend, the quotient, and the remainder. 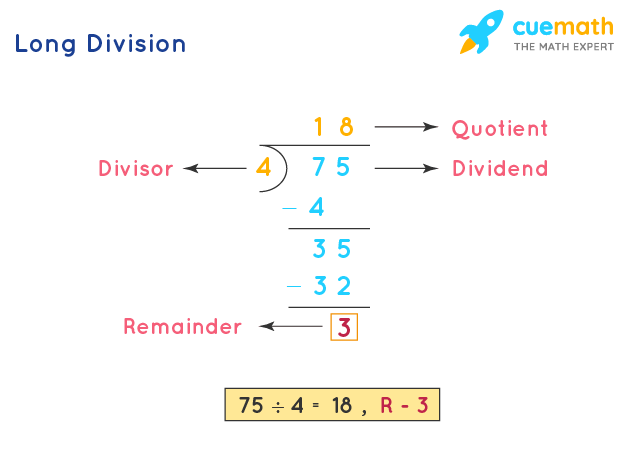 Here are the terms related to a division which are also considered as the parts of long division. They are the same terms that are used in the regular division.

Have a look at the table given below in order to understand the terms related to division with reference to the example shown above.

How to Do Long Division?

Division is one of the four basic mathematical operations, the other three being addition, subtraction, and multiplication. In arithmetic, long division is a standard division algorithm for dividing large numbers, breaking down a division problem into a series of easier steps.

Let's have a look at the examples given below for a better understanding of the concept.

Case 1: When the first digit of the dividend is equal to or greater than the divisor Case 2: When the first digit of the dividend is less than the divisor. Case 3: When the divisor doesn't go with the first digit of the dividend. 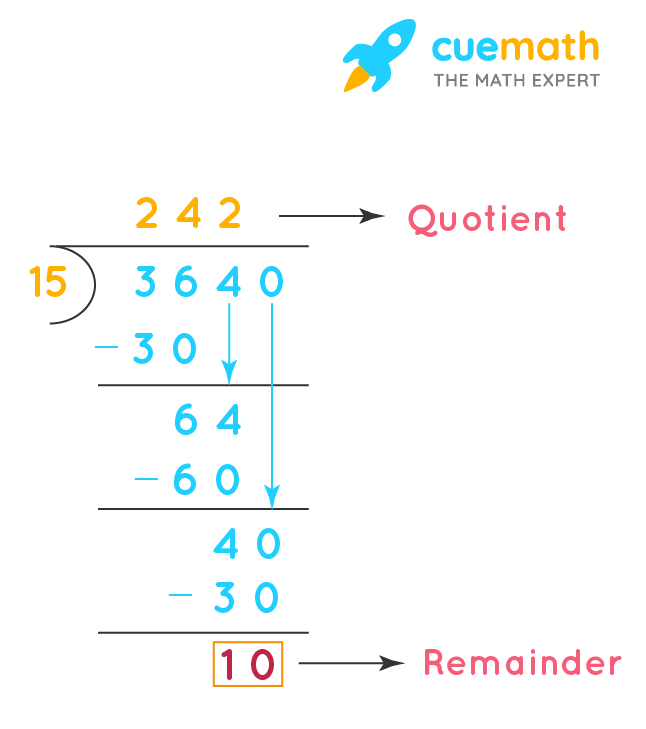 Given below are a few important points that would help you while working with long division:

When there are no common factors between the numerator and the denominator, or if you can't find the factors, you can use the long division process to simplify the expression. For more details about long division polynomials, visit the Dividing Polynomials page.

How Do I Do Long Division?

The following steps explain the process of long division:

What Are the 5 Steps of Long Division?

Given below are the 5 main steps of long division. For example, let us see how we divide 52 by 2.

Therefore, the quotient is 26 and the remainder is 0.

How Do you Do Long Division With 2 Digits?

What Is the Long Division of Polynomials?

In algebra, a long division of polynomials is an algorithm to divide a polynomial by another polynomial of the same or the lower degree, using the long division method. For example, (4x2 - 5x - 21) is a polynomial that can be divided by (x - 3) following some defined rules, which will result in 4x +7 as the quotient.

How to Do Long Division with Decimals?

The long division with decimals is performed the same way as the normal long division. It follows the steps given below.

What is Long Division Symbol Called?

How do you Divide When the Divisor is Bigger Than the Dividend?

In this case of division, we can simply keep on adding zeros to the dividend until it becomes appropriate to divide further. Then, we can divide the quotient by the same powers of 10 for the final answer once we get the division done correctly.