The division is one of the four basic mathematical operations, the other three being addition, subtraction, and multiplication. In simple words, division can be defined as the splitting of a large group into smaller groups such that every group will have an equal number of items. It is an operation used for equal grouping and equal sharing in math. Let us learn about division operation in math in detail in this article.

The division is one of the basic arithmetic operations in math in which a larger number is broken down into smaller groups having the same number of items. For example, for a sports event, if 30 students need to be divided into groups of 5 students, then how many total groups will be formed? Such problems can be solved easily using the division operation. Here we need to divide 30 by 5. The result will be 30 ÷ 5 = 6. So, there will be 6 groups of 5 students in each. You can verify this value by multiplying 6 and 5, which will give you the original number, 30.

The division is denoted by a mathematical symbol that consists of a small horizontal line with a dot each above and below the line. There are two basic division symbols that represent the division of two numbers. They are ÷ and /. For example, 4 ÷ 2 = 2, and 4/2 = 2. 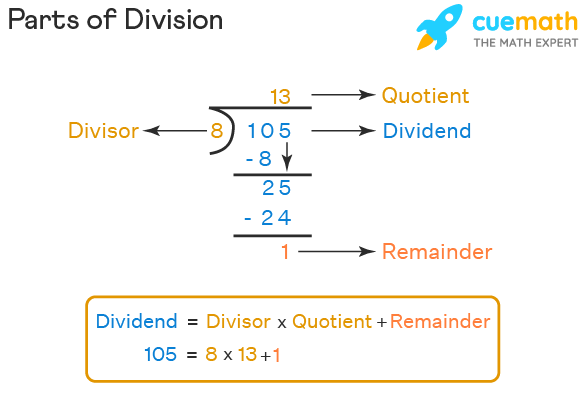 Here, when we divide 105 by 8, we get the values of a divisor, dividend, quotient, and remainder. Look at the table below to understand the meaning of these terms.

In the above image, it is written that "Dividend = Divisor × Quotient + Remainder". This equation satisfies the above values but will it be satisfying for values of dividend, divisor, quotient, and the remainder in every division? Let's find out.

The above formula helps us to verify the values of quotient and remainder obtained after performing division. We can substitute the values of the quotient, remainder, and divisor in the above equation and check whether the result is the same as dividend or not. If we get the dividend, it means we have done the steps of division correctly. If not, it means there is an error in our calculations that we need to rectify. Let us take one example and see if it satisfies the above division algorithm or not. Divide 17 by 3. 17 divided by 3 will give us 5 as the quotient and 2 as the remainder.

How to do Division?

One-digit division can be done using multiplication tables. For example, to solve 24 ÷ 6, we just need to see what we need to multiply by 6 to get 24 as the answer. Clearly, 6 × 4 = 24, therefore 24 ÷ 6 = 4. When it comes to the division of numbers with greater numbers, then we can use the long division method. Let us take the example of 65 divided by 5 to understand it. Follow the steps below to learn how to do division:

Look at the image given below showing the above steps of division. 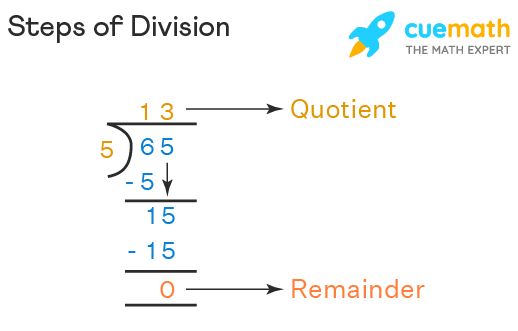 It is not always mandatory to have 0 as the remainder. If the dividend is not a multiple of the divisor, then we get a non-zero remainder. When we get a non-zero remainder while dividing a number by another, it is known as a division with remainders. Let us take an example of distributing 9 balloons to 2 children equally such that both children will have an equal number of balloons with them. Is it possible to do that without getting a leftover?

Dividing 9 by 2 will give us 4 as the quotient and 1 as the remainder. We can make 2 groups having 4 balloons in each but 1 balloon will be left. Look at the image below showing division with remainders (9 ÷ 2). 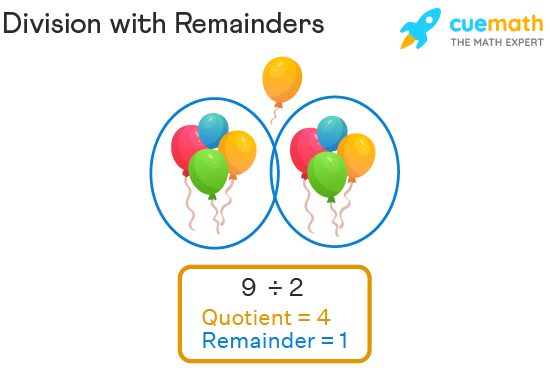 To know more about the division facts check out a few more interesting articles listed below and learn the basics.

What is Division in Math?

In maths, we have four basic arithmetic operations i.e., addition, subtraction, multiplication, and division. Amongst these four operations, the division is one of the major operations we use in our daily activities. It is the process of splitting a large group into equal smaller groups. For example, divide 25 by 5. Division fact for this example will be, 25 ÷ 5 = 5.

What are the Two Types of Division?

The division is split into two parts i.e., partitive and quotative models. Partitive is used when dividing a number into a known number of slots. For example, if we divide 4 into 2 slots, we can find out how many items will be in each slot. Quotative division is used when dividing a number into slots of a measured quantity. For example, when we divide 4 into slots of 2, we can determine how many slots can be created.

What are the Three Parts of Division?

The three main parts of division are dividend, quotient, and divisor. In addition to this, when the divisor is not a factor of the dividend, then we get a non-zero remainder which is the fourth part of the division.

What is Long Division Method?

The long division method is the most common method used to solve problems on division. In this process, the divisor is written outside the division symbol, while the dividend is placed within. The quotient is written above the overbar on top of the dividend.

What are the Steps of the Division?

The steps to do division are listed below:

How do you Divide when the Divisor is Bigger Than the Dividend?

In this case of division, we can simply keep on adding zeros to the right of the dividend until it becomes appropriate to divide further. Furthermore, we can divide the quotient by the same powers of 10 for the final answer once we get the division done correctly.

How to Divide Decimals?

Dividing decimals is also as easy as dividing any other numbers. All you need to do is multiply the decimal with powers of ten till you get an integer. Then you can carry out the normal division process. Once you get your final answer, make sure to divide it with the same powers of 10 that you divided earlier with.

How to Use Division Calculator?

What are the Rules of Multiplication and Division of Integers?

The rules for the multiplication and division of integers are given below:

What is the Division Symbol?

There are two symbols of division which are: ÷ and /. ÷ symbol is drawn by placing two small dots on the top and bottom of a small horizontal line. And, / sign is used mostly with fractions, ratios, and percentages.

Why Division by Zero is Undefined?