Multiples
Go back to  'Numbers'

Learning about multiples is one of the most interesting concepts in math. In this chapter, you will be introduced to the definition of multiples, multiple math, the meaning of multiple, and multiples of 3, along with multiple of math examples.

Check-out the interactive simulations to know more about the lesson and try your hand at solving a few interesting practice questions on Multiples at the end of the page.

Learning about multiples helps us to get the answer to such questions as we use them further in finding the Least Common Multiple.

Multiples are numbers that we get when we multiply one whole number by another whole number.

Or in simple terms, you get the multiples of a number when you multiply!

Do you remember the multiplication tables?

We will be using them to find multiples.

The first five multiples of 6 are:

Here are some additional multiples of 6: 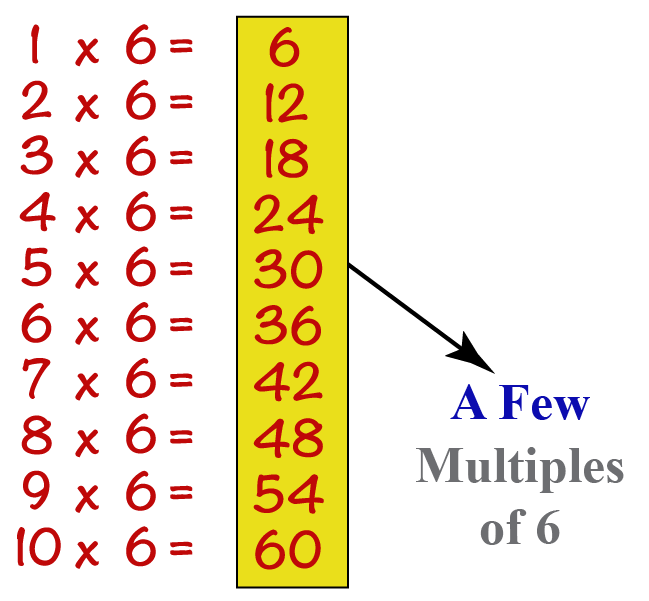 Let us place numbers in the above equation.

Find and learn the first five multiples of a number through this calculator. Enter numbers between 1 and 10 and calculate!

A Jumping Game of Multiples

Let us play a simple game.

There is a track marked with numbers.

You have to jump on every third tile without stepping on any number in between. Let us colour each 3rd tile as she jumps on the track.

If you list the tiles that she jumps on, you can observe that they are multiples of 3

For example, the first multiple of 7 is 7 because:

We know that numbers are infinite.

Therefore, the multiples of a number are infinite.

For example, if we need to list the multiples of 3, we start with:

However, will you be able to list all the multiples here?

No, because they are infinite.

For example, if we take the multiples of 5

We can see that:

Here are a few ways to find multiples

Let us take the multiples of 2 and 5

Representing these multiples on the number line:

These are called the common multiples of 2 and 5

The Least Common Multiple (LCM) of two or more numbers is the smallest number among all common multiples of the given numbers.

This can be written as:

There are some fresh and delicious oranges in the orchard.

Can you number the orange trees in order and spot the trees which have fruits?

Which series of multiples is being followed here? We will begin numbering the trees as

This shows that they are multiples of 3

Four friends Ria, Joe, Sam, and Tom decided to pluck flowers from the garden in the order of the first four multiples of 7

Can you list the number of flowers that each of them plucked as a series of the first four multiples of 7?

Starting from August 5, can you colour those dates in the calendar?

Write down the series to check the number whose multiples are shown. After colouring every 5th day, the series that we get is:

Her teacher asked her to water the pots which were marked in the order of the multiples of 9.

However, she missed a few pots.

Can you help her identify the pots that she missed? Let us start counting the multiplication table of 9

Try these Practice Questions in the Multiples Sheet given below.

Given below are the list of topics that are closely connected to multiples. These topics will also give you a glimpse of how such concepts are covered in Cuemath.

We hope you enjoyed learning about Multiples with the simulations and practice questions. Now you will be able to easily solve problems on multiple math with multiple math examples you learned today.

1. How many multiples does a number have?

A number has uncountable or infinite number of multiples.