Remainder refers to the remaining part, after the completion of the division process. If we divide 5 pens among 4 children equally, we are left with 1 pen. This example is translated into math, the remaining 1 pen is the remainder. Also, if you divide the number 20, with a number 3, the quotient is 6 and the remainder is 2. The remainder is always lesser than the divisor.

What is Remainder in Division?

The remainder, as its name suggests, is something that "remains" after completing a task. In math, the number 17 cannot be exactly divided by the number 3. After division, the number 2 is left aside as a remainder. As an example, let us assume that you have 15 cookies that you want to share with 3 of your friends, Mary, David, and Jake. You want to share the cookies equally among your friends and yourself. You will be distributing them in the following way. 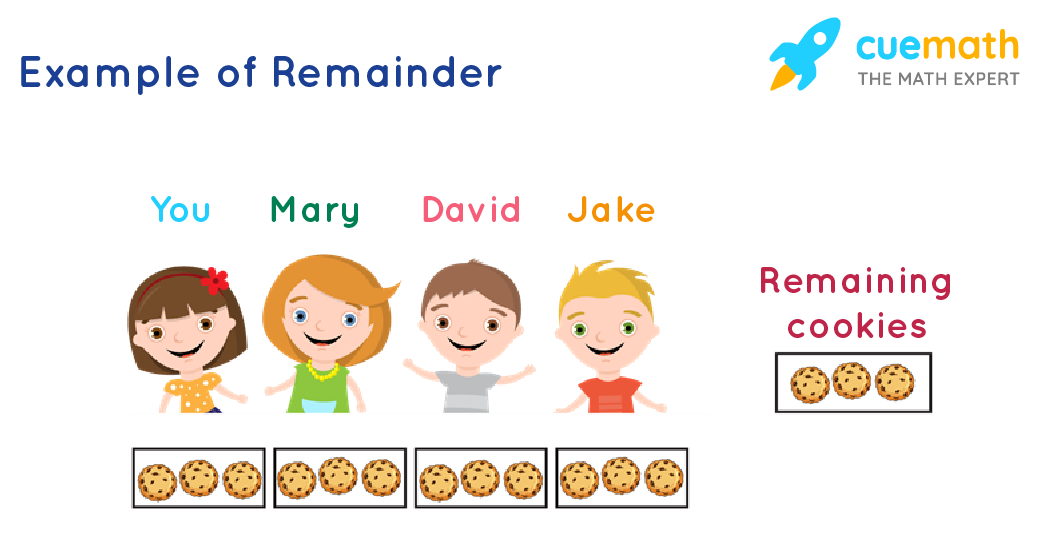 Here, you can see that there are 3 cookies "remaining" after the distribution. These 3 cookies cannot be further shared equally among the 4 of you. Hence, 3 is called the "remainder". Also, on observation, the remaining 3 cookies are less in number than the 4 people, with whom the cookies have been shared. We can understand that the remainder is always lesser than the divisor.

Remainder is a part of a division. It is a left-over digit we get while performing division. When there is an incomplete division after certain steps we get remainder as a result. It is left over when a few things are divided into groups with an equal number of things. Let's recall the scenario we discussed earlier 15 cookies being shared equally among 4 children. In other words, 15 cookies had to be divided into 4 equal groups. We were left with 3 cookies and hence, 3 were the remainder.

You can check these remainders by long division.

How to Represent Remainder?

We can represent the remainder of the division in two ways.

The properties of the remainder are as follows:

What do you Mean by Remainder?

Remainder, as its name suggests, is something that "remains". In the process of division, the last number left over is the remainder. Dividing a number 17 by 5, we have a remainder of 2. 17 = 5 × 3 + 2. Here the last remaining number 2 is the remainder.

What is an Example of a Remainder?

When 35 toffees are distributed equally among 8 children, each child gets 4 toffees and 3 toffees are left undistributed. Here, 3 is the remainder. You can find more examples of remainders in math. Remainder is the number lesser in value than the divisor or the dividend.

How does a Remainder Work?

The definition of the remainder is the part of a quantity that is left after dividing it into equal groups. For this let us look at a simple example. A number 30 on dividing into 7 parts, we are left with 2. 30 = 7 × 4 + 2. Here the number 2 which is left after the dividing 30, is the remainder.

Is Zero a Remainder?

Yes, 0 can be a remainder when the divisor divides the dividend completely. For example, the remainder when 15 is divided by 3 is 0. This means that the number 15 can be equally divided into 3 parts without any remainder.

What is Quotient and Remainder in Maths?

The quotient is equal to the number of times the divisor divides the dividend. This can be easily understood with a simple example. The number 7 divides 45 into 6 parts and leaves a remainder, 3. Here the number 6 is the quotient. Further 45 = 7 × 6 + 3. Also, here the remaining number 3 is the remainder. The remainder is the number that is left over after the division process.

How to Get Remainder in Maths?

What is the Remainder Theorem?

What is the Remainder Formula?