What is Quotient in Division?

The division is the process of repetitive subtraction. The number of times of subtraction is equal to the quotient. The division is denoted by a mathematical symbol(÷) which consists of a short horizontal line with a dot each above and below the line. The quotient is the final answer of this division process. Let us explore with an example to understand the quotient in division. The example shows division as a method of grouping objects equally in groups. The box below contains 16 balls. Let us divide them into 4 equal groups. We can see that there are 4 balls placed in each group. The division statement for the picture below can be written as 16/4 = 4. 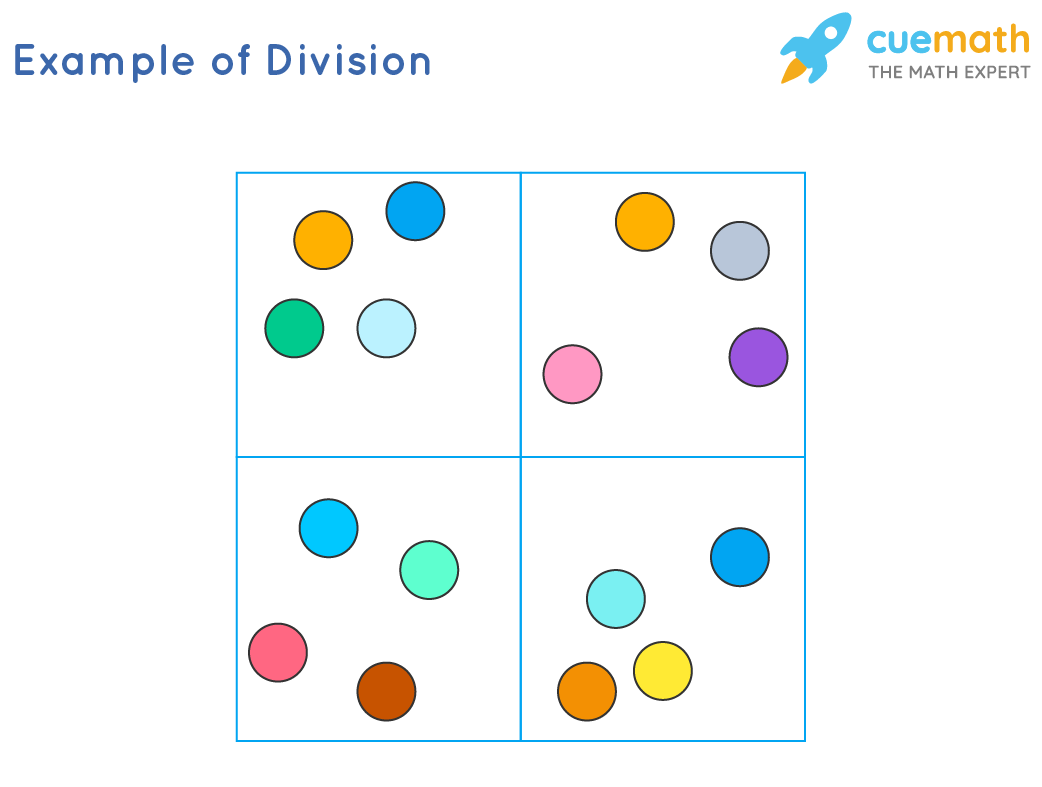 The division is one of the four basic mathematical operations, the other three being Addition, Subtraction, and Multiplication. In simple words, division can be defined as the splitting of a large group into equal smaller groups. The quotient is the result of the division process. On completion of the division process, the quotient is obtained. Division can be introduced by considering objects from our daily life like slices of a pizza or a bar of chocolate. We can see that a pizza can be divided into 4 slices, or a bar of chocolate can be divided and the number of pieces obtained is the quotient.

Imagine you have a chocolate bar with 12 pieces. You want to share it with your friend. Can the bar be divided equally between the two? Will there be any leftover pieces? As you can see here, we have divided this bar of chocolate into 2 parts. Both you and your friend will get 6 pieces of chocolate each. Did you notice? No piece of chocolate remains unshared. Hence, there is no remainder. We can write the division statement for the example above as 12 ÷ 2 = 6. Here each of the numbers in the division can be designated with special terms. Let us check the following terms closely related to the quotient.

This example can also be mathematically represented as below: 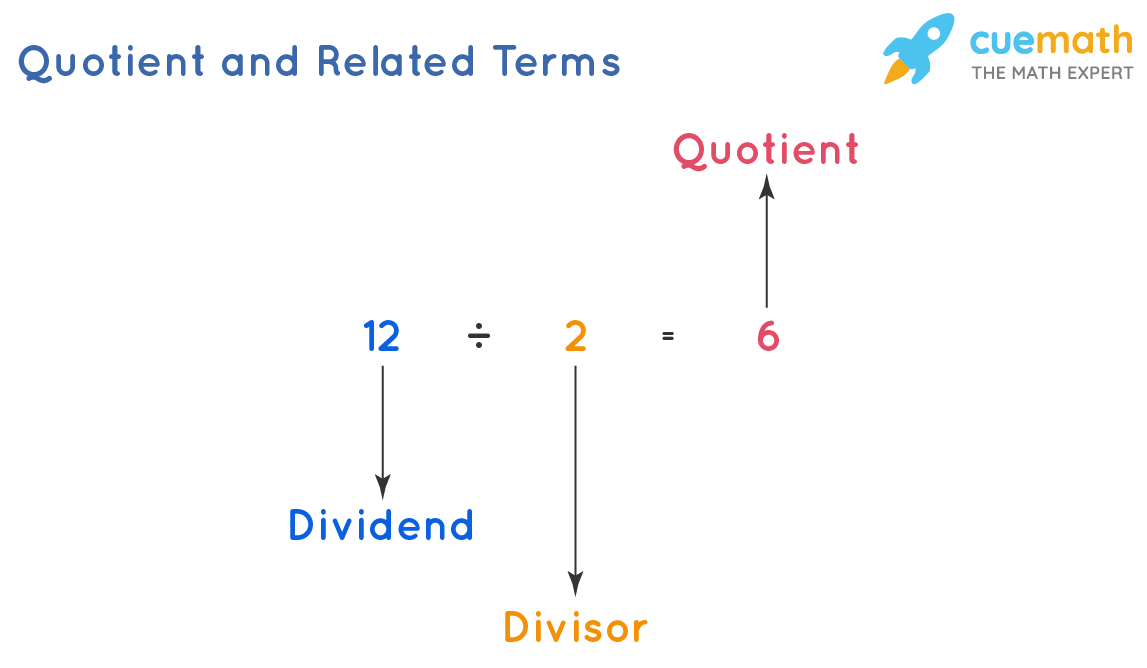 Division method follows the use of the divisor and the dividend to find the quotient. The quotient can be calculated by dividing dividend with divisor. Quotient = Dividend ÷ Divisor. This is the most common method used to solve problems on division. Let us understand this with the help of examples. Let us solve 435 ÷ 4. The number 435 can be represented on an abacus with its hundredth, tens, and unit place respectively.

The following two steps are helpful to understand the division process and to find the quotient. 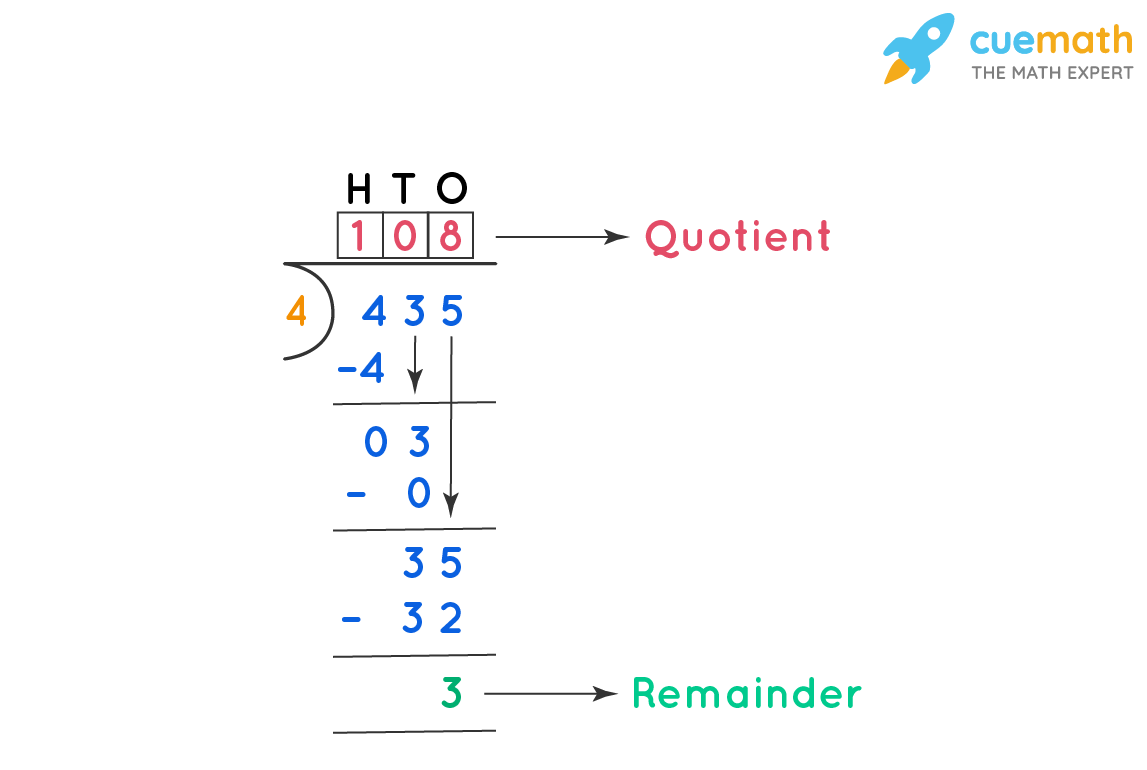 Verification of Division Result: We can easily verify if our answer is correct or wrong. As the process of division is the reverse of multiplication, let us find out how we can verify our answer using this information.For example, 6/2 = 3 and remainder is 0. In other words, 6 = 2 × 3 + 0. This can be expressed as Dividend = Divisor × Quotient + Remainder. Let us reconsider the example discussed above. Here the dividend is 435, the divisor is 4, the quotient is 108, and the remainder is 3. Substituting the value in the formula, we get 435 = 4 × 108 + 3. Therefore, our answer is correct.

What Is Quotient in Math?

The result of the division is known as a quotient in math. In the example, 63/9 = 7. 7 will be the quotient since 7 groups can be formed with 9 units in each group. The quotient can be larger or smaller than the divisor but lesser than the dividend.

How Do You Find Quotient in Division?

The quotient in the division can be found by the formula, Dividend ÷ Divisor = Quotient. Let us understand this by a simple example of 12÷ 4 = 3. Here 12 is the dividend, 4 is the divisor, and 3 is the quotient.

Is Quotient Always a Whole Number?

What Is the Difference Between Quotient and Remainder?

How Can We Verify the Quotient in Division?

The division is also known as inverse multiplication. We can verify our results by using the following formula:

How Do You Find the Quotient Through Long Division?

To find quotient through the long division method check the number of times the divisor goes in the dividend. Subtract the answer of the product of the divisor and the quotient from the dividend. This difference gives the remainder. The entire terms involved in the division process can be presented in the form of an equation as Dividend = Divisor ×Quotient + Remainder.

What Is the Quotient of 14 Divided by 7?

What Is the Difference Between Quotient and Product?