What is Dividing Polynomials?

Polynomials are algebraic expressions that consist of variables and coefficients. It is written in the following format: 5x2 + 6x - 17. This polynomial has three terms that are arranged according to their degree. The term with the highest degree is placed first, followed by the lower ones. Dividing polynomials is an algorithm to solve a rational number that represents a polynomial divided by a monomial or another polynomial. The divisor and the dividend are placed exactly the same way as we do for regular division. For example, if we need to divide 5x2 + 7x + 25 by 6x - 25, we write it in this way: 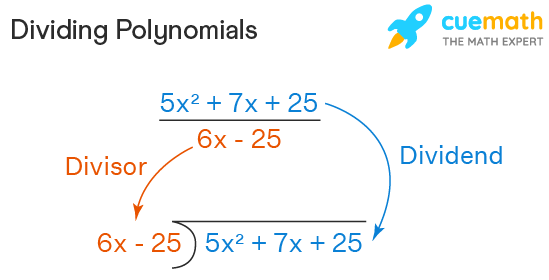 While dividing polynomials by monomials, the division can be done in two ways. One is by simply separating the '+' and '-' operator signs. That means, we break the polynomial from the operating sign, and solve each part separately. Another method is to do the simple factorization and further simplifying. Let us have a look at both methods in detail.

For dividing polynomials by binomials or any other type of polynomials, the most common and general method is the long division method. When there are no common factors between the numerator and the denominator, or if you can't find the factors, you can use the long division process to simplify the expression. 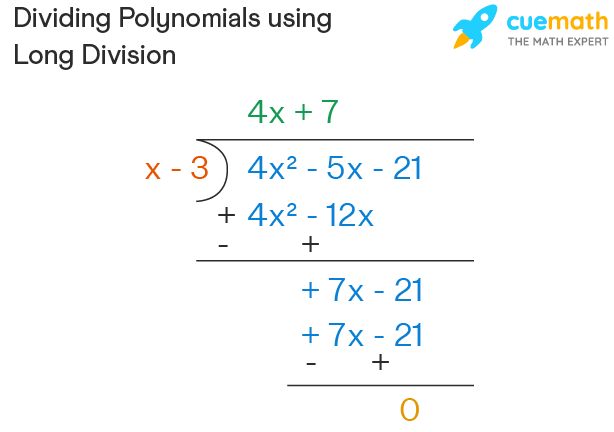 Step 2. Multiply the divisor by that answer, place the product (4x2 - 12x) below the dividend.

Step 4. Repeat the same process with the new polynomial obtained after subtraction.

Synthetic division is a technique to divide a polynomial with a linear binomial by only considering the values of the coefficients. In this method, we first write the polynomials in the standard form from the highest degree term to the lowest degree terms. While writing in descending powers, use 0's as the coefficients of the missing terms. For example, x3+3 has to be written as x3 + 0x2 + 0x + 3. Follow the steps given below for dividing polynomials using the synthetic division method:

Step 2: Set up the division by writing the coefficients of the dividend on the right and k on the left. [Note: Use 0's for the missing terms in the dividend]

Step 4: Multiply k with that leading coefficient and write the product below the second coefficient from the left side of the dividend. So, we get, 4×1=4 that we will write below 0.

Step 6: Repeat the same process of multiplication of k with the number obtained in step 5 and write the product in the next column to the right. 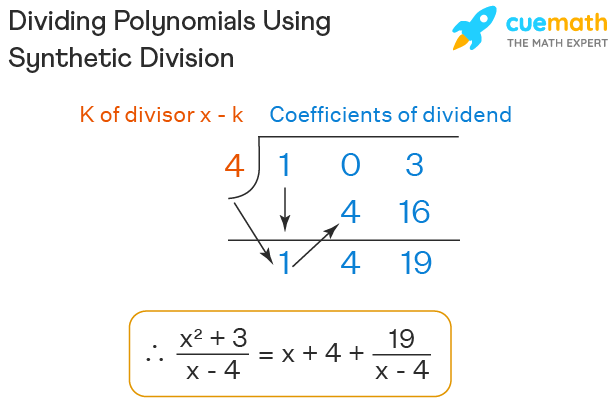 Check these articles to know more about the concept of dividing polynomials and its related topics.

What is Dividing Polynomials?

Dividing polynomials is one of the arithmetic operations performed on two given polynomials. In this, the dividend is generally of a higher degree and the divisor is a lower degree polynomial.

Why is Dividing Polynomials Important?

Dividing polynomials is important because it provides an algorithm to solve a rational number that represents a polynomial divided by a monomial or another polynomial.

What is the Easiest Way for Dividing Polynomials?

The easiest way to divide polynomials is by using the long division method. However, in the case of the division of polynomials by a monomial, it can be directly solved by splitting the terms or by factorization.

What are the Two Methods of Dividing Polynomials?

The two methods to divide polynomials are given below:

What is Polynomial Division Used for in Real-Life?

We use polynomial division for various aspects of our day-to-day lives. We need it for coding, engineering, designing, architecting, and various other real-life areas.

What Method of Dividing Polynomials by a Monomial is Best?

In the case of the division of polynomials by a monomial, it can be directly solved by splitting the terms or by factorization. We can divide each term of the dividend with the given monomial and find the result.