Polynomials are algebraic expressions that contain indeterminates and constants. You can think of polynomials as a dialect of mathematics. They are used to express numbers in almost every field of mathematics and are considered very important in certain branches of math, such as calculus. For example, 2x + 9 and x2 + 3x + 11 are polynomials. You might have noticed that none of these examples contain the "=" sign. Have a look at this article in order to understand polynomials in a better way.

What is a Polynomial?

A polynomial is a type of expression. An expression is a mathematical statement without an equal-to sign (=). Let us understand the meaning and examples of polynomials as explained below.

Let us understand this by taking an example: 3x2 + 5. In the given polynomial, there are certain terms that we need to understand. Here, x is known as the variable. 3 which is multiplied to x2 has a special name. We denote it by the term "coefficient". 5 is known as the constant. The power of the variable x is 2.

Below given are a few expressions that are not examples of a polynomial.

The following image shows all the terms in a polynomial. 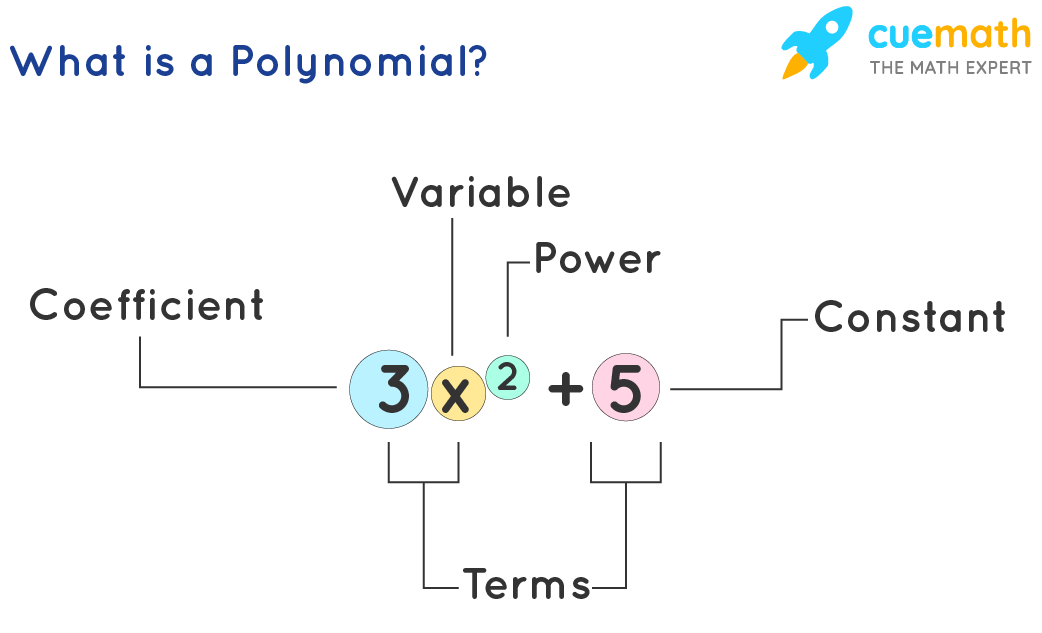 Example: Express the polynomial 5 + 2x + x2 in the standard form.

To express the above polynomial in standard form, we will first check the degree of the polynomial.

Always remember that in the standard form of a polynomial, the terms are written in decreasing order of the power of the variable, here, x.

The terms of polynomials are defined as the parts of the expression that are separated by the operators "+" or "-". For example, the polynomial expression 2x3 - 4x2 + 7x - 4 consists of four terms.

Like terms in polynomials are those terms which have the same variable and same power. Terms that have different variables and/or different powers are known as unlike terms. Hence, if a polynomial has two variables, then all the same powers of any ONE variable will be known as like terms. Let us understand these two with the help of examples given below.

Degree of a Polynomial

The degree of the polynomial with more than one variable is equal to the sum of the exponents of the variables in it.

Example 2: Find the degree of the polynomial 3xy.

In the above polynomial, the power of each variable x and y is 1. To calculate the degree in a polynomial with more than one variable, add the powers of all the variables in a term. So, we will get the degree of the given polynomial (3xy) as 2.

Polynomials can be categorized based on their degree and their power. Based on the numbers of terms, there are mainly three types of polynomials that are listed below:

A polynomial expression has terms connected by the addition or subtraction operators. There are different properties and theorems on polynomials based on the type of polynomial and the operation performed. Some of these are as given below,

Theorem 1: If A and B are two given polynomials then,

Theorem 2: Given polynomials A and B ≠ 0, there are unique polynomials Q (quotient) and R (residue) such that,

Theorem 3 (Bezout's Theorem): Polynomial P(x) is divisible by binomial x − a, if and only if P(a) = 0. This is also known as the factor theorem.

Therefore, P(x) has at most deg ⁡P = n different zeros.

Theorem 6: Polynomial of n-th degree has exactly n complex/real roots along with their multiplicities.

Theorem 9: A real polynomial P(x) has a unique factorization (up to the order) of the form, 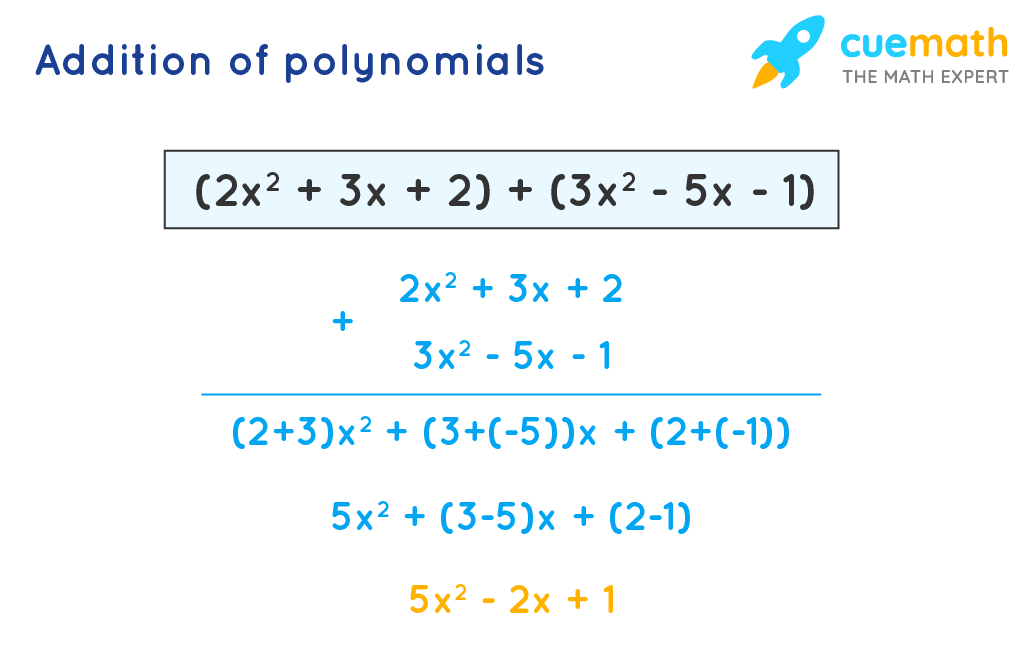 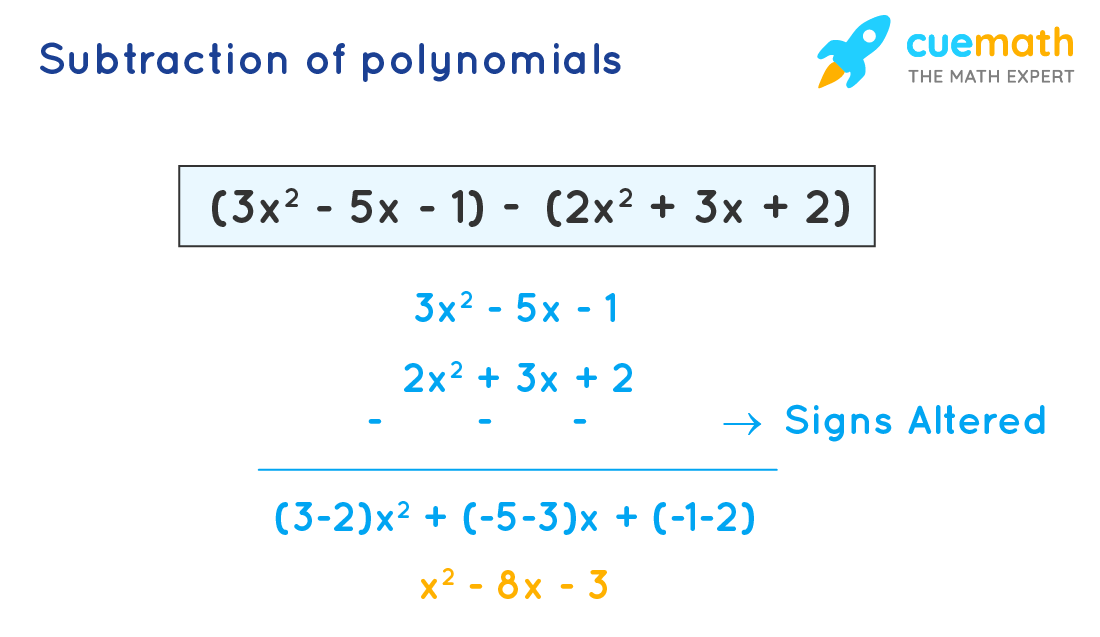 The division of polynomials is an arithmetic operation where we divide a given polynomial by another polynomial which is generally of a lesser degree in comparison to the degree of the dividend. There are two methods to divide polynomials.

To learn more about each type of division, click on the respective link.

Factorization of polynomials is the process by which we decompose a polynomial expression into the form of the product of its irreducible factors, such that the coefficients of the factors are in the same domain as that of the main polynomial. There are different techniques that can be followed for factoring polynomials, given as,

Based on the complexity of the given polynomial expression, we can follow any of the above-given methods.

What is the Meaning of Polynomial?

Polynomial is an algebraic expression with terms separated using the operators "+" and "-" in which the exponents of variables are always nonnegative integers. For example, x2 + x + 5, y2 + 1, and 3x3 - 7x + 2 are some polynomials.

What are Coefficients in a Polynomial?

What are Monomials, Binomials, and Trinomials?

8 is a Polynomial. Since the degree of this polynomial is equal to zero, it is an example of a constant polynomial.

What is Constant in a Polynomial?

A number that is not a multiple of any variable in a polynomial is known as a constant. For example, in the polynomial 4x4 + 3x2 - 5, -5 is the constant. A polynomial may or may not have a constant in it.

What is a Polynomial Equation?

Why are Polynomials Important?

What is Descartes Rule of Signs of Polynomials?

How to Multiply and Divide Polynomials?

For the multiplication of polynomials, there are three laws that are to be kept in mind - distributive law, associative law, and commutative law. For division, the most common method used to divide one polynomial by another is the long division method.

Where to Find Polynomial Calculator?

We can find the polynomial calculator by clicking here. We can use this to add/subtract/multiply/divide polynomials.

Is Zero a Polynomial?