Standard form in maths is the method of representing a particular element in the most common manner. From large numbers to small numbers to equations to lines, every element in maths is denoted in a standard form. Let us explore this interesting concept of standard form in various elements of maths such as fractions, equations, algebra, slope along with learning the standard from formula. Solving examples and understanding the basic thumb rule will help in understanding the concept better.

What is Standard Form?

Let us study the standard form of each of these in detail.

The standard form of numbers (which is also known as "scientific notation" of numbers)  has different meanings depending on which country you are in. In the United Kingdom and countries using UK conventions, the standard form is another name for scientific notation. Scientific notation is the process of writing a very large or very small number using numbers between 1 to 10 multiplied by the power of 10. For example, 3890 is written as 3.89 × 103. These are numbers that are greater than 1 use positive powers of 10. Numbers less than 1 use the negative power of 10. For example, 0.0451 is written as 4.51 × 10-2.

In the United States and countries using US conventions, the standard form is the usual way of writing numbers in decimal notation. Using the same example,

The standard form of an equation is where zero goes on the right and everything else goes on the left. i.e., it is of the form

This helps in solving the equation in a simple manner. Equations used for polynomials, linear and quadratic have a standard form, let us look at what they are.

Note: The thumb rule for writing a polynomial in its standard form is D-U. D stands for Descending and U stands for unlike terms.

Standard Form of a Linear Equation 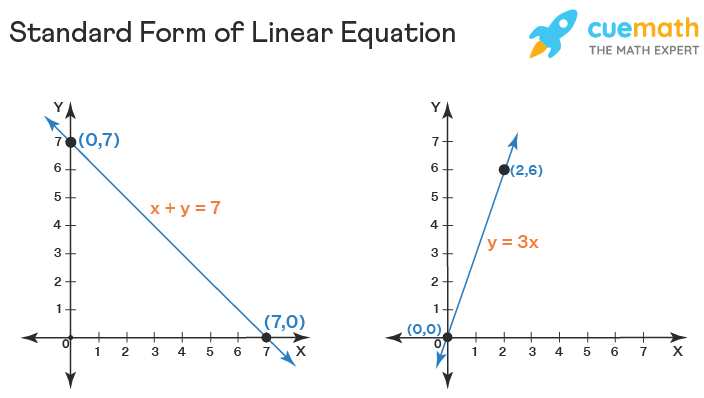 Let’s see how to convert the two lines into the standard form of a linear equation ax + by = c.

Therefore, what we see here is the standard form of equation which is linear i.e. ax + by = c.

Standard Form of Slope of a Line

The slope of a line is defined as the change in y coordinate with respect to the change in x coordinate of that line. Representing a line geometrically, we use the standard form of a linear equation (mentioned above). To determine the slope of a line that is expressed graphically, the equation must be converted to a slope-intercept form. To do this, we must solve the equation for y, and the standard form of a slope is expressed as y = mx + c, where m is the slope of the line. This formula is used when the line is straight. 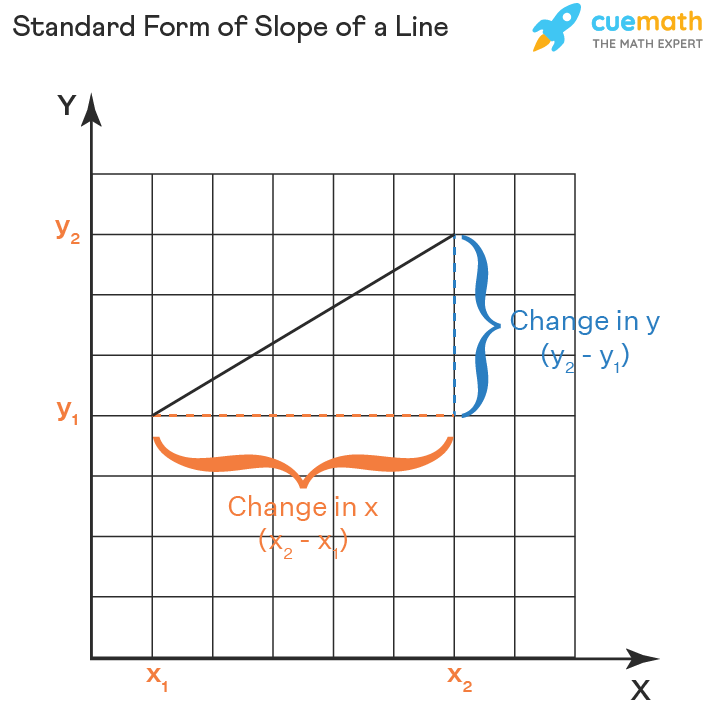 The standard form of quadratic equation in a variable x is of the form ax2 + bx + c = 0, where a ≠ 0, and a, b, and c are real numbers. Here, b and c can be either zeros or non-zero numbers and

A parabola is a graph of a quadratic function that refers to an equation of a curve, such that a point on the curve is equidistant from a fixed point, and a fixed-line. The fixed point is called the focus of the parabola, and the fixed line is called the directrix of the parabola. The following graphs are two typical parabolas; their x and y-intercepts are marked by green dots, and the vertex of each parabola is marked by a blue dot. 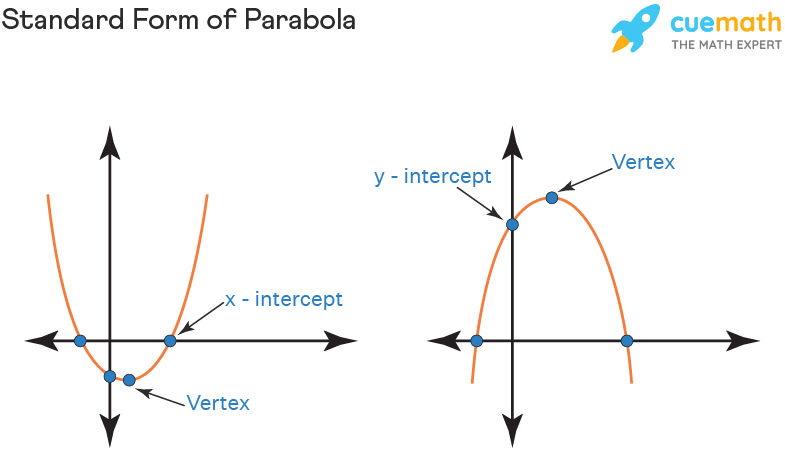 The graph will have one of the two shapes as shown above. 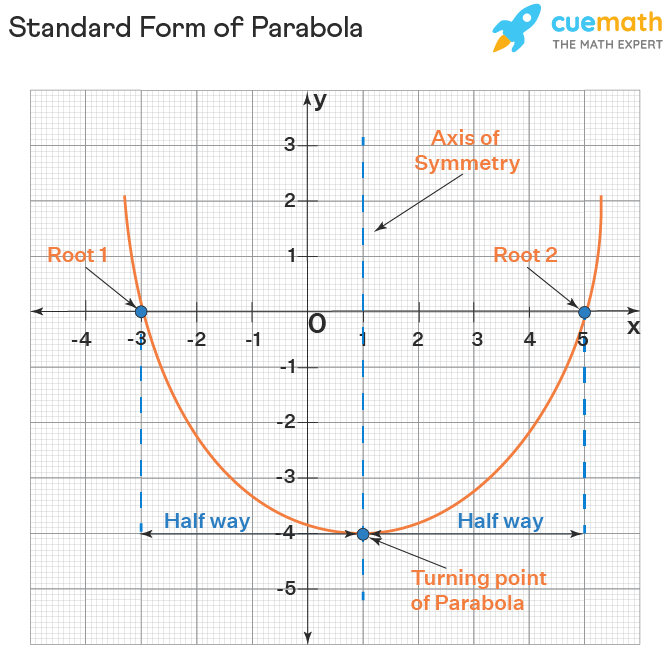 Further, we have standard form formulas for equations of higher degrees. Also in coordinate geometry, we have a standard form for different geometric representations such as a straight line, circle, ellipse, hyperbola, and parabola.

Listed below are a few topics that are related to a standard form.

What is the Definition of Standard Form in Math?

How Do We Write Standard Form in Maths?

How Do You Write Standard Form of Number?

What is Standard Form Formula?

What is the Standard Form Formula for Parabola?

The standard form formula of the equation of the parabola is this: (y - k)2 = 4p(x - h), where p≠ 0 only in case a parabola has a horizontal axis.

What is the Standard Form for Slope Formula?

How to Use Standard Form Formula?

What is the Standard Form of Equation?

In the standard form of an equation, 0 is usually present on the right side, whereas the rest of the expressions are on the left. Also, the terms are arranged in the descending order of their exponents. To convert an equation into stadard form, just apply arithmetic operations on both sides to turn the right side to be 0.