Many times you see lines drawn on any coordinate plane. Now, if you want to find out how will you be able to predict whether any two lines are parallel or perpendicular or at any other angle without actually using a compass, then finding the slope is the best way to do so. Here, we can also calculate the angles made by any line as shown in the image. 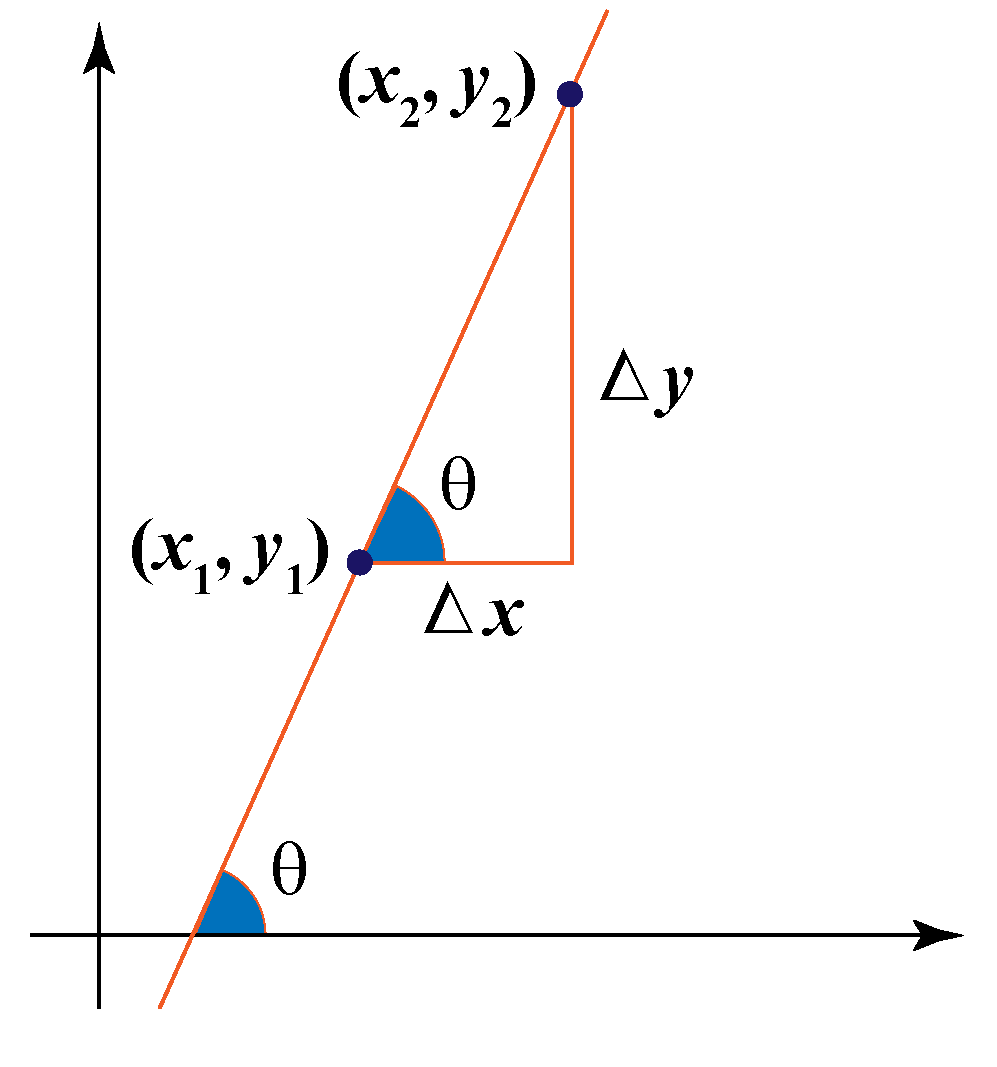 Let's check the page in order to understand more about how to find the slope of a line.

where m is the slope.

We call this \(tan\theta\) to be the slope of the line.

How to Find Slope with Two Points

Now that we know what exactly is meant by slope, can you try to find the slope between any two given points?

Now, let us recall the definition of slope in order to be clear as to what are we supposed to find. We can recall that slope is the "change in y coordinate with respect to the change in x coordinate of that line".

Hence, using these values in a ratio, we get :

Where m is the slope, and \(\theta\) is the angle made by the line with the positive x-axis.

Given below is a moveable coordinate plane. Try moving points A and B and check out the values of the slope given by the slope calculator!

Slope of a Straight Line 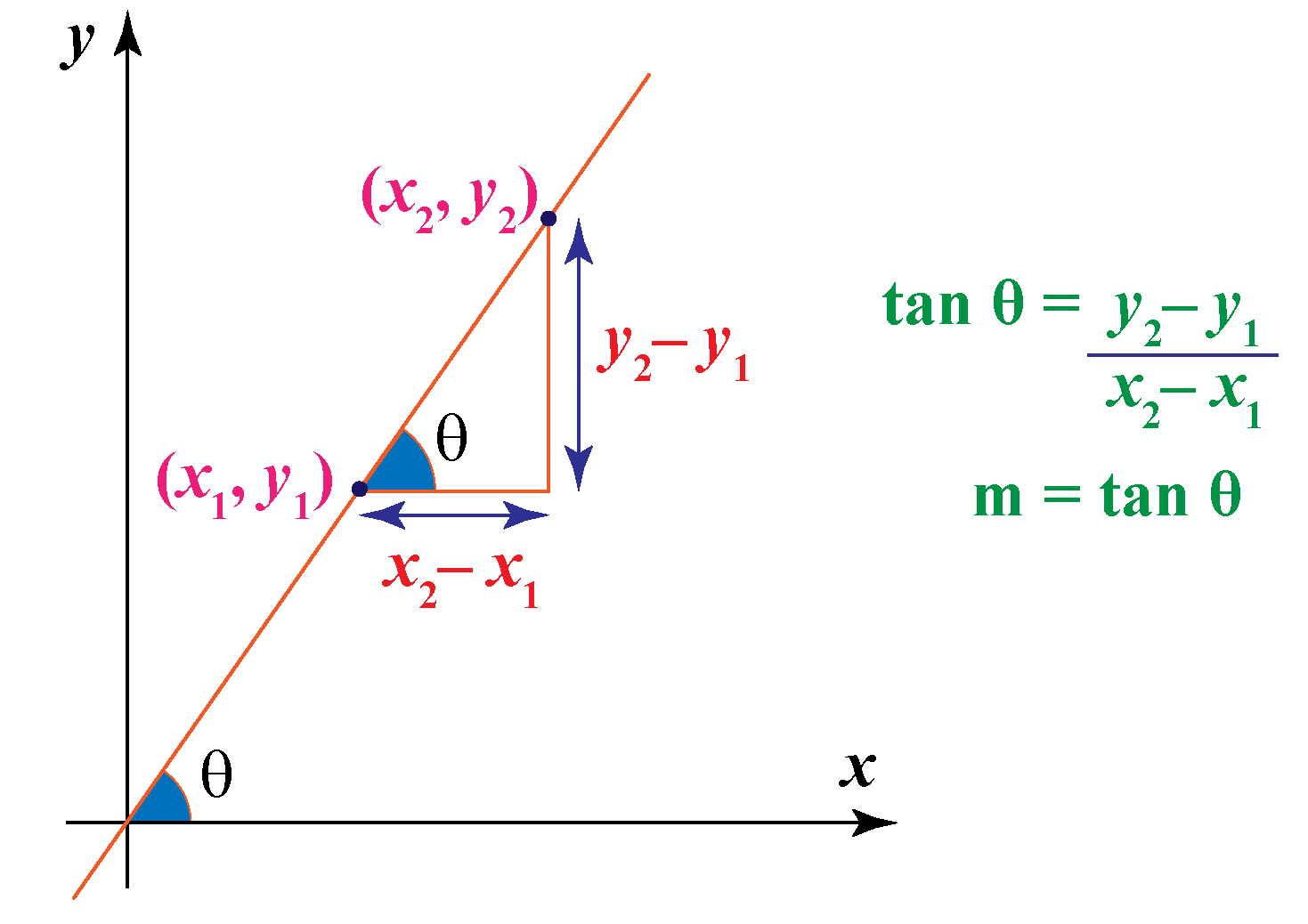 But, we know that the slope of a line has only one value. So, the slopes found by Methods 1 and 2 will be equal! Can you think of any reason why is this so? Do you remember the definition of the tangent of any angle? Now try finding the connection between the two values of the slope we calculated.

In addition to that, let's say we are given the equation of a straight line. Can you think of any way to find the value of the slope? It is very simple. The general equation of a line can be given as

There are  4 different types of slopes are Positive slope, Negative slope, zero slope, and undefined Slope.

And, between any two given points we know that

hence, we finally get

Thus, this becomes our final equation for the value of slope formula at any given instant.

We know that the general slope formula is given by

Now, let us have a look at these solved examples :

John is given a line with the formula \(2y = 8x + 9\). Now, his teacher asks him to find the slope of the line from the given equation. Can you help him find this slope?

Hence, we try to bring the equation to this form. We make the coefficient of \(y = 1\), and hence we get

We know that if the equation is given as \( x = 5 \). We can thus see that y is missing from our equation. Hence, we can assume the coefficient of y to be 0 for now. Thus we now get

Now, we try to make the coefficient of y as 1. In order to do so, we will have to divide both sides by Zero. We know that mathematically, if any real is divided by Zero, then the value can not be determined.

In this case, the coefficient of x divided by Zero will give us our slope. But we know that the answer will not be defined in such a case. So we can safely say that our slope is not defined in such cases.

Sandy was checking a graph, and he realized that the Raise was 10 units, while the Run was just 5 units. Can you help him in figuring out what could be the slope of the line?

We know that the slope of a line will be

Now, substituting the values, we will get

There is a line that is parallel to the x-axis and intersects the y - axis at \(y =  4\). Can you find the value of the slope of the line?

We know that the slope of any line is the tangent of its angle made with the x-axis. So, if the line is given to be parallel to the x-axis itself, then the angle made will be \(0^o\). Hence, \(tan0^o\) will be 0. So the value of the slope is found to be

Hence, the value of the slope will be Zero.

Smith is playing a game with his friend, and his friend asks him a question: What is the equation of a line whose slope is 1, and that passes through the point (-1, -5)? Let's try to help Smith in solving this question.

Hence, substituting the values of m and c in the general equation, we get our final equation as \(y = x - 4\)

A line has the equation \(y = 2x - 7\). Find the equation of a line that is perpendicular to the given line, and is passing through the origin.

The mini-lesson targeted the fascinating concept of Slope. The math journey around Slope starts with what a student already knows, and goes on to creatively crafting a fresh concept in the young minds. Done in a way that not only it is relatable and easy to grasp, but also will stay with them forever. Here lies the magic with Cuemath.

Q1. How do you find the slope?

The slope is found by measuring the tangent of the angle made by the line with the x-axis.

Q3. What is an undefined slope?