What is Vertex Angle?

Vertex angle is defined as the angle formed by two lines or rays that intersect at a point. These two rays make the sides of the angle. In other words, the angle associated within a given vertex is called vertex angle and it is measured in degrees. Look at the image below, the angle within ray 1 and ray 2 that originate from the vertex O is the vertex angle is written as ∠AOB. The angle can also be named as ∠BOA or by only its vertex i.e. ∠O. The vertex should always be written in the middle while using three points to name an angle. 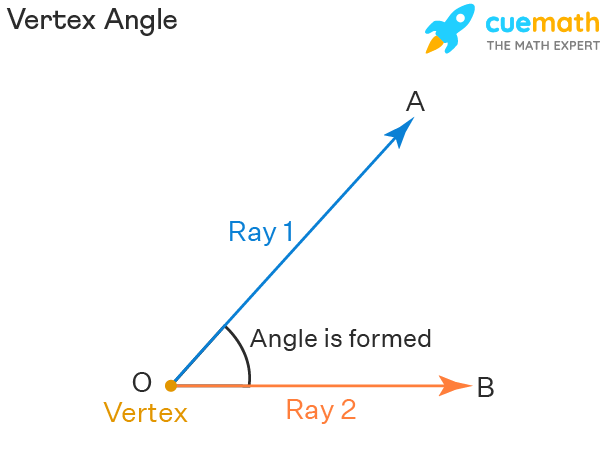 Angles that share the same vertex are written differently. Look at the image below, we cannot write ∠AOB with the vertex angle as O since the angle is being shared with both ∠BOC and ∠COA. Therefore, each angle should be named by the points on each side forming the angle along with the angle's vertex. 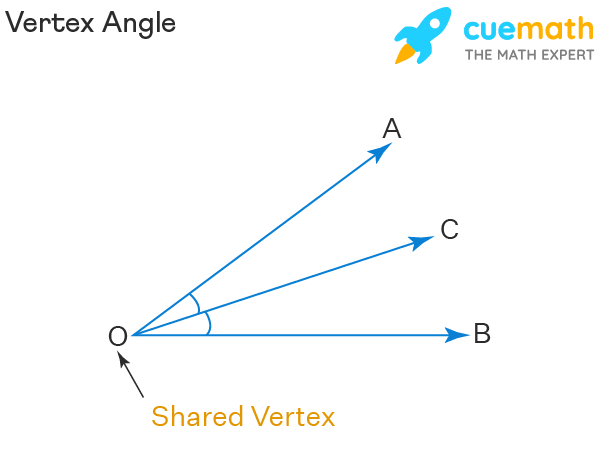 A vertex in math is a point where two lines or rays meet forming an angle at that point and is denoted by uppercase letters like A, O, P, etc. The plural of vertex is vertices. In solid geometry, i.e., 3D geometry, shapes such as cubes, cuboids form several vertices. Whereas in 2D shapes such as polygons form only a vertex.

Not just plane shapes, even solid shapes have vertices that are formed where the edges meet. The lines do not intersect each other to form the vertex, however, it is the corners or edges of the solid shape that form the vertex. For example, look at the image of a cube, the corners or the edges of the shape are considered as the vertex making a total of 8 vertices. Vertices sometimes are also indicated as the top or apex of a shape such as triangles and pyramids. This vertex or apex is the top corner above the base of the base. For example, look at the image of a tetrahedron, it has 4 vertices.

To find the vertices in a solid shape, we can use Euler's formula that is given as:

Vertex Angle of a Parabola

When we graph a quadratic equation, we get a parabola. The vertex definition of a parabola is the point where exactly it turns which is also called the minimum point(if it is of the shape 'U"). When the parabola, opens down the vertex is called the maximum point(if it is of the shape '∩'). The parabola vertex lies at the axis of symmetry. Look at the image below for reference. 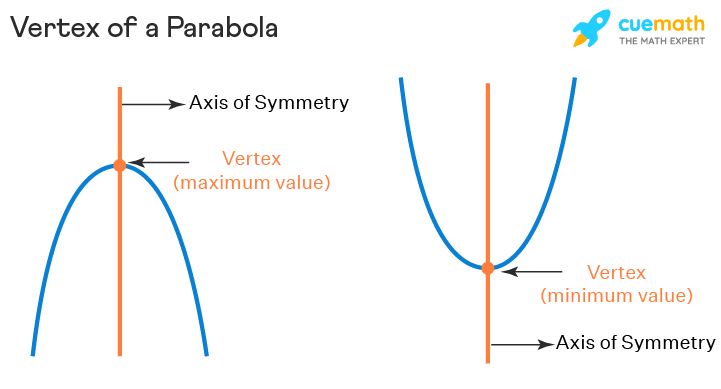 The vertex of the parabola is at the coordinate (h, k) 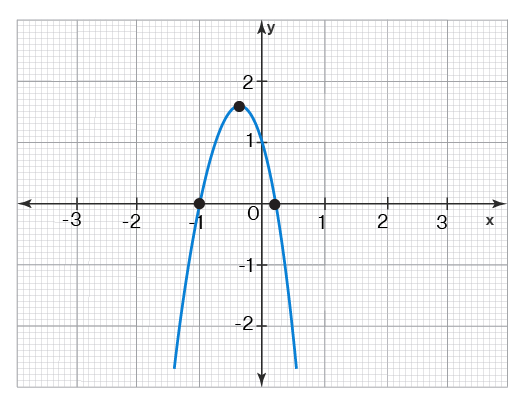 The coordinates of the vertex are.

Note that the parabola will open downward (since \(a\) is negative), but the vertex has a positive y-coordinate.

How to Find Vertex Angle?

The sum of the interior angles in a regular polygon,

For the degree of each interior angle in a regular polygon,

Where n = number of sides

Listed below are a few topics related to vertex of angle, take a look.

What is the Vertex Meaning in Maths?

Vertex is the point of intersection of edges or line segments. The plural of it is called vertices. These vertices differ according to the shape such as a triangle has 3 edges or vertices and a pentagon has 5 vertices or corners.

Why is the Vertex Angle Important?

What is the Vertex of a Graph?

Vertex is the node of the graph. It is also the point that defines the node or the maximum or minimum point.

Why is the Vertex Angle of an Isosceles Triangle?

An isosceles triangle has one vertex angle and two congruent base angles. The sum angle is 180

What is the Difference Between a Corner and a Vertex?

The corner and vertex are considered the same as both are the edges or meeting points of two intersecting lines.