How to Find a Monomial?

A monomial can be easily identified with the help of the following properties:

Let us look at the following examples to identify monomials.

If we observe the third example in the table given above, that is, 3x2 + y, we see that it has 2 terms. An expression having two terms is called a binomial. Similarly, an expression having three terms is called a trinomial. For example, 4x2 + 2y + 6z is a trinomial. It is important to note that monomial, binomial, and trinomial are all types of polynomials. Look at the image given below to understand the difference between monomial, binomial, and trinomial. 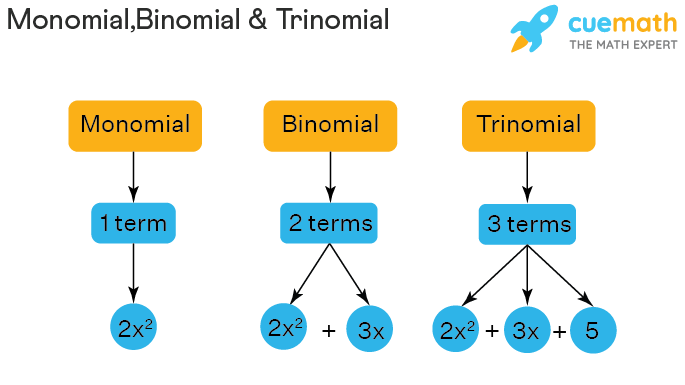 Degree of a Monomial

Example: Find the degree of the monomial: -4xy.

While factoring monomial, we always factor coefficient and variables separately. Factorizing a monomial is as simple as factorizing a whole number. Consider the number 24. Let us see the factors of this number. The number 24 can be split into its factors as shown in the following factor tree: 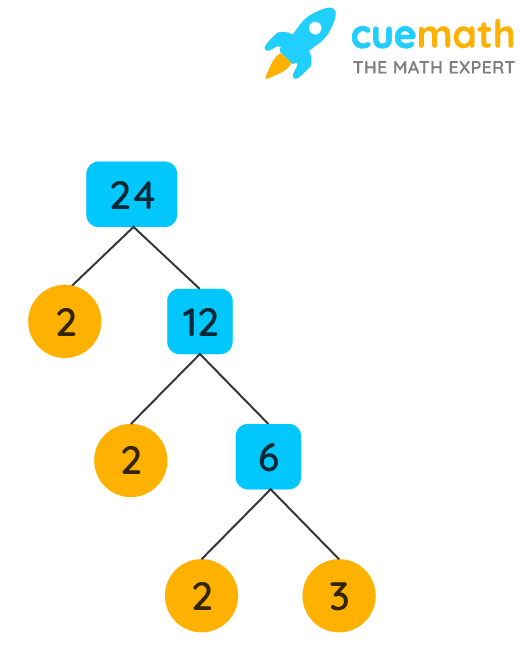 In the same manner, we can factorize a monomial. We just need to remember that we always factorize the coefficient and the variables separately.

In the given monomial, 15 is the coefficient and y3 is the variable. 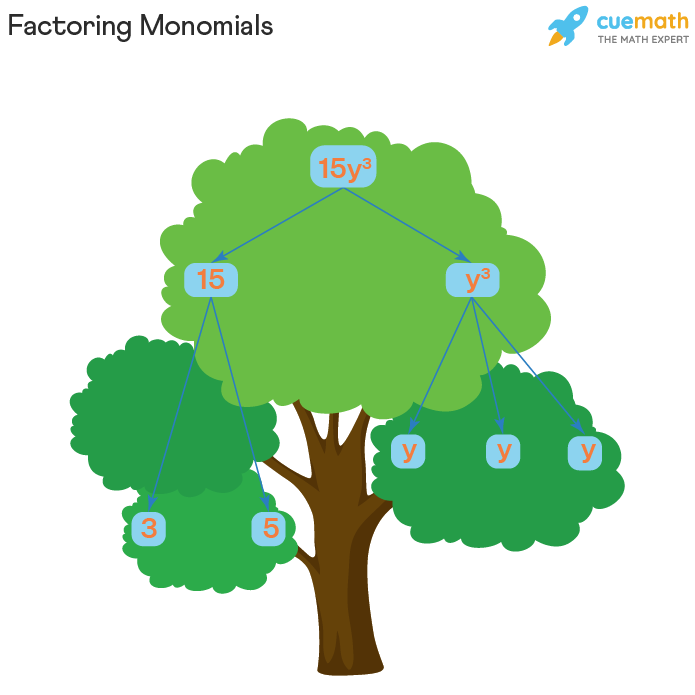 Tips and Tricks on Monomials

Observe the following points which help in understanding the results of the arithmetic operations on a monomial.

Check these interesting articles related to monomials in math.

What is a Monomial in Math?

Monomial is an expression that has a single non-zero term. Monomials can be numbers, variables, or numbers multiplied with variables. For example, 2, ab, and 42xy are examples of a monomial. A few other examples of monomials are 5x, 2y3, 7xy, x5.

How to Factor a Monomial?

Is x2 a Monomial?

Yes, x2 is a monomial because x2 is a single non-zero term and its exponent is a whole number. Further, the term does not have a variable associated with the denominator.

Is XYZ a Monomial?

Yes, the term XYZ is a monomial. Even with three variables, it is a single term, thus, it can be called a monomial. In other words, a monomial can be made up of more than one variable. Here x, y, z are its variables.

What is the Degree of a Monomial?

What is a Constant Monomial?

What is the Difference Between Monomial, Binomial, Trinomial?

How to Divide a Polynomial by a Monomial?

In order to divide a polynomial by a monomial, we divide each term of the given polynomial separately by the monomial. Let us understand this with an example using the following steps:

How to Find the Greatest Common Factor of Monomials?

How to Identify a Monomial?

A monomial can be easily identified with the help of the following properties:

How to Multiply a Polynomial by a Monomial?

In order to multiply a polynomial by a monomial, we need to multiply each term of the polynomial with the given monomial. Let us understand this with an example using the following steps: