Dividing monomials is a method of dividing monomials by expressing the terms of the two given expressions in their expanded form and then canceling out the common ones. Dividing polynomials follow the same procedure as to how we multiply monomials.

In this article, let's learn about dividing monomials in detail with solved examples.

What is Dividing Monomials? 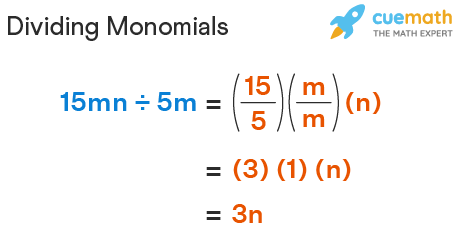 How to Divide Monomials?

Dividing monomials refers to the division of coefficients of the two given monomials and division of the variables separately and then combining them to get the result. Let's consider an example. 14x2y/7x

While dividing monomials with exponents, we need to consider exponents' rules. Thus, in the case of the division of monomials, then their base is the same, just subtract the exponents. It's the opposite of the multiplication rule.

Now, in the above case, the monomials have only one term each consisting of the same variable or same base, that is y. Thus, applying the exponent rule, y4/y2 = y4-2 = y2.

Check out these interesting articles to learn more about dividing monomials and its related topics.

What Is Dividing Monomials in Algebra?

How Do You Divide Monomials with Coefficients?

How Do You Divide Negative Monomials?

As we already know that the variables of a monomial cannot have a negative or fractional exponent, whereas the dividing monomials with negative coefficients follow the rules as given below:

How To Divide Polynomials by Monomials?

What Is the Property To Be Used When Dividing a Monomial by a Monomial?

When dividing a monomial with a monomial, we used to take up the division of coefficients and variables separately. In case there is more than one variable, use fraction multiplication, write one fraction for each variable. Then simplify the variables using the Quotient Property.