Exponent rules are those laws that are used for simplifying expressions with exponents. Many arithmetic operations like addition, subtraction, multiplication, and division can be conveniently performed in quick steps using the laws of exponents. These rules also help in simplifying numbers with complex powers involving fractions, decimals, and roots.

Let us learn more about the different rules of exponents, involving different kinds of numbers for the base and exponents.

What are Exponent Rules?

Exponent rules, which are also known as the 'laws of exponents' or the 'properties of exponents' make the process of simplifying expressions involving exponents easier. These rules are helpful to simplify the expressions that have decimals, fractions, irrational numbers, and negative integers as their exponents. 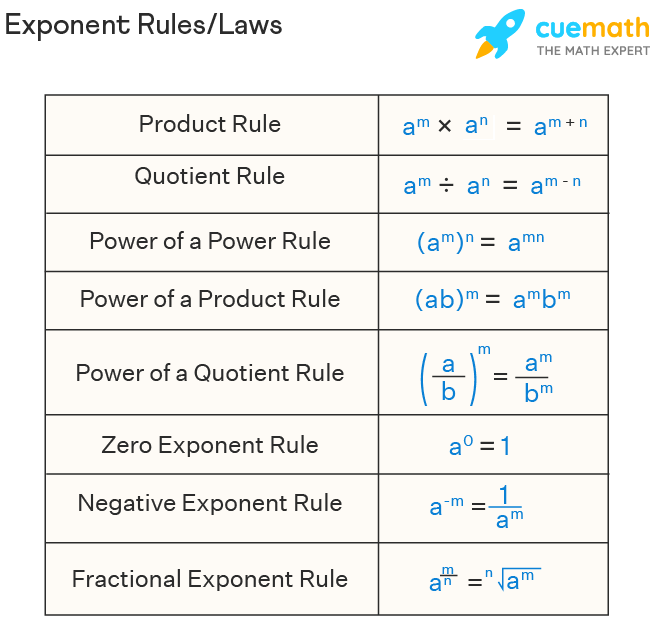 Let us learn each of these in detail now.

This shows that without using the law, the expression involves more calculation.

We can clearly see that without using the law, the expression involves more calculation.

The zero law of exponents is applied when the exponent of an expression is 0. This rule says, "Any number (other than 0) raised to 0 is 1." Note that 00 is not defined, it is an indeterminate form. This will help us understand that irrespective of the base the value for a zero exponent is always equal to 1.

The negative law of exponents is used when an exponent is a negative number. This rule says, "To convert any negative exponent into positive exponent, the reciprocal should be taken." The expression is transferred from the numerator to the denominator with the change in sign of the exponent values.

Power of a Power Law of Exponents

The 'power of a power law of exponents' is used to simplify expressions of the form (am)n. This rule says, "When we have a single base with two exponents, just multiply the exponents." The two exponents are available one over the other. These can be conveniently multiplied to make a single exponent.

Using this law reduces the process of calculation.

Power of Product Rule of Exponents

The 'power of a product rule of exponents' is used to find the result of a product that is raised to an exponent. This law says, "Distribute the exponent to each multiplicand of the product."

Power of a Quotient Rule of Exponents

Here is an example of the exponent rule given above.

We can use the law and simply solve, and we can also solve the same expression without the law which involves multiple steps.

Now, by using the fractional exponents rule, this fractional power turns into a radical.

This is also used as an alternate form of the fractional exponents rule. Thus, this rule is defined in two ways:

The rules of exponents explained above can be summarized in a chart as shown below.

What are Exponent Rules in Math?

Exponent rules are those laws which are used for simplifying expressions with exponents. These laws are also helpful to simplify the expressions that have decimals, fractions, irrational numbers, and negative integers as their exponents. For example, if we need to solve 345 × 347, we can use the exponent rule which says, am × an = am+n, that is, 345 × 347 = 345 + 7 = 3412 . A few rules of exponents are listed as follows:

What are the 8 Laws of Exponents?

The 8 laws of exponents can be listed as follows:

What is the Purpose of the Exponent Rules?

How to Prove the Laws of Exponents?

What are the Exponent Rules when Bases are the same?

What are the Exponent Rules when Bases are Different?

What is the Rule for Zero Exponents?

What is the Difference Between Exponents and Powers?

Exponents and powers sometimes are referred to as the same thing. But in general, in the power am, 'm' is referred to as an exponent. You can understand the differences in depth by clicking here.

Can the Exponent be a Fraction?