What are Irrational Numbers?

Irrational numbers are the set of real numbers that cannot be expressed in the form of a fraction, p/q where p and q are integers. The denominator q is not equal to zero (q ≠ 0). Also, the decimal expansion of an irrational number is neither terminating nor repeating.

Given below are the few specific irrational numbers that are commonly used.

How to Identify an Irrational Number?

Before knowing the symbol of irrational numbers, we discuss the symbols used for other types of numbers.

The table illustrates the list of some of the irrational numbers.

Any number which is defined in the form of a fraction p/q or ratio is called a rational number. This may consist of the numerator (p) and denominator (q), where q is not equal to zero. A rational number can be a whole number or an integer.

The table illustrates the difference between rational and irrational numbers. 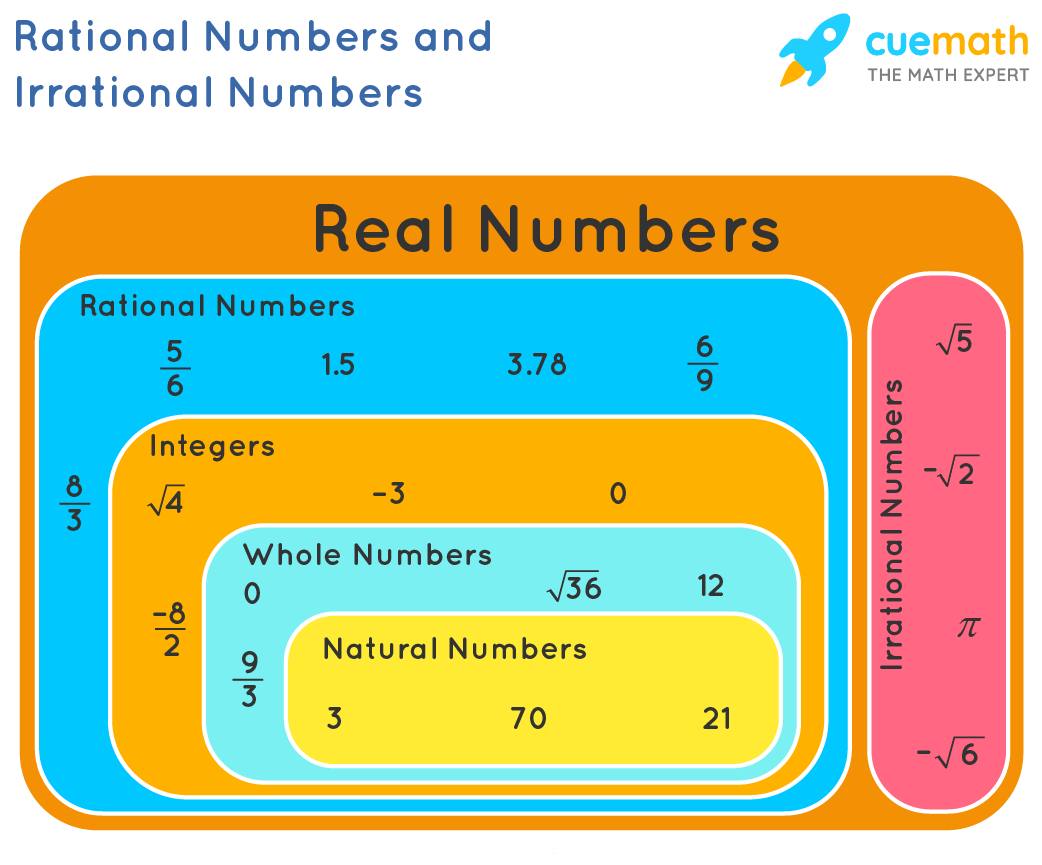 There are some cool and interesting facts about irrational numbers that make us deeply understand the why behind the what. 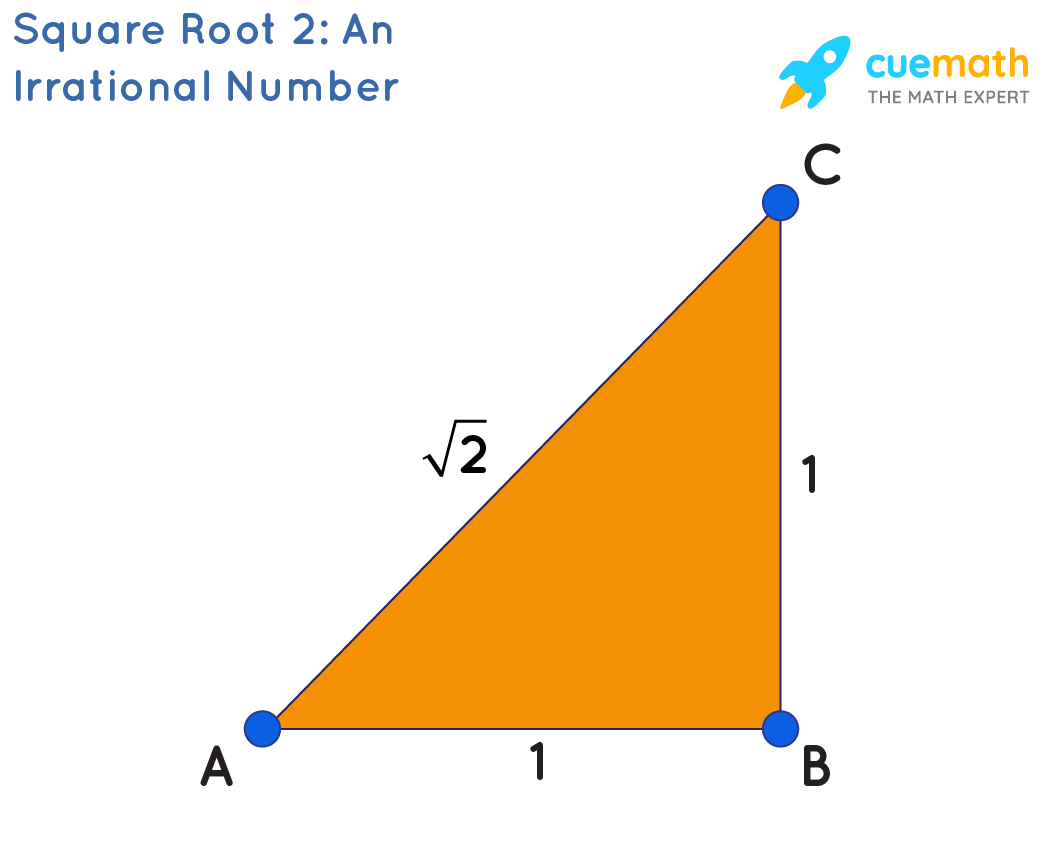 The square root of 2 or √2 was the first invented irrational number when calculating the length of the isosceles triangle. He used the famous Pythagoras formula a2 = b2 + c2 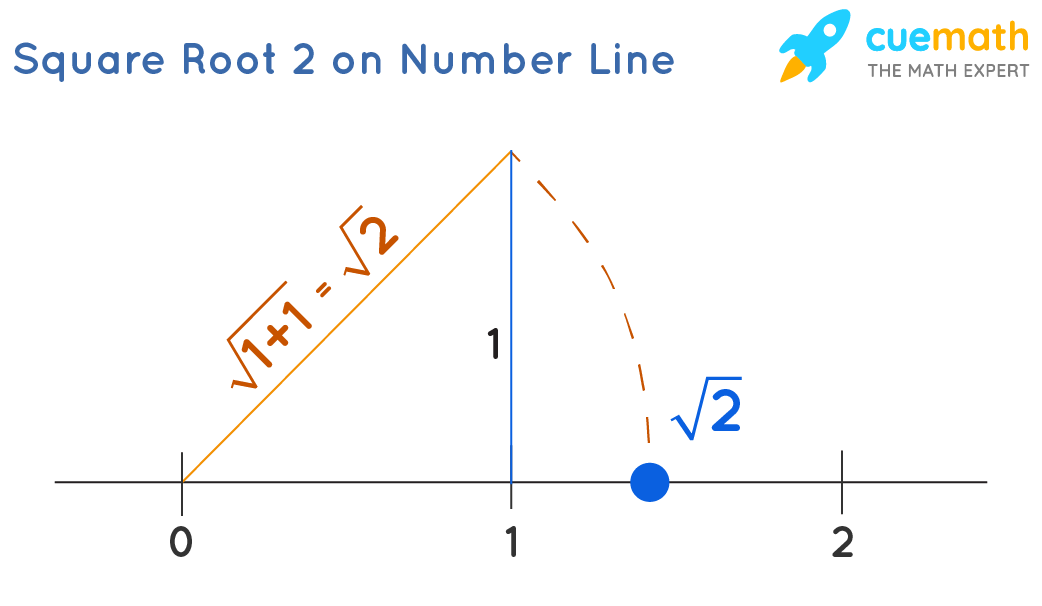 √2 lies between numbers 1 and 2 as the value is 1.41421... So he revealed that the length AC cannot be expressed in the form of fractions or integers.

The value of π is approximately calculated to over 22 trillion digits without an end. A computer took about 105 days, with 24 hard drives, to calculate the value of pi.

The Euler's number is first introduced by Leonhard Euler, a Swiss mathematician in the year 1731. This 'e' is also called a Napier Number which is mostly used in logarithm and trigonometry.

Proof of an Irrational number:

Let's understand how to prove that a given non perfect square is irrational. Here is stepwise proof of the same.

To prove: √2 is an irrational number.

Squaring both the sides of equation (1), we have

Substituting this value of p in equation (3), we have

According to the initial assumption, p and q are co-primes but the result obtained above contradicts this assumption as p and q have 2 as a common prime factor other than 1. This contradiction arose due to the incorrect assumption that √2 is rational. 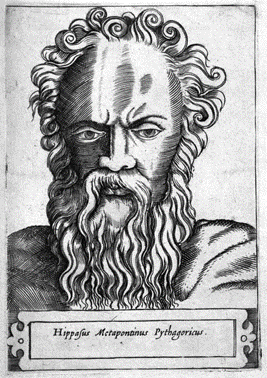 The first man to recognize the existence of irrational numbers might have died for his discovery. Hippassus of Metapontum was an ancient Greek philosopher of the Pythagorean school of thought. Supposedly, he tried to use his teacher's famous theorem: a2 + b2 = c2 to find the length of the diagonal of a unit square. This revealed that a square's sides are incommensurable with its diagonal and that this length cannot be expressed as the ratio of two integers. The other Pythagoreans believed dogmatically that only positive rational numbers could exist. They were so horrified by the idea of incommensurability that they threw Hippassus overboard on a sea voyage and vowed to keep the existence of irrational numbers an official secret of their sect. However, there are good reasons to believe Hippassus's demise is merely an apocryphal myth. Historical documents referencing the incident are both sparse and written 800 years after the time of Pythagoras and Hippassus. It wasn't until approximately 300 years after Hippassus's time that Euclid would give his proof for the irrationality of √2.

The Pythagoreans had likely manually measured the diagonal of a unit square. However, they would have regarded such a measurement as an approximation close to a precise rational number that gave the true length of the diagonal. Before Hippassus, Pythagoreans had no reason to suspect that there were real numbers that in principle, not merely in practice, could not be measured or counted to. Numbers were the spiritual basis of their philosophy and religion for the Pythagoreans. Cosmology, physics, ethics, and spirituality were predicated on the premise that "all is number." They believed that all things--the number of stars in the sky, the pitches of musical scales, and the qualities of virtue--could all be described by and apprehended through rational numbers.

What are Irrational Numbers in Math?

Irrational numbers are a set of real numbers that cannot be expressed in the form of fractions or ratios. Ex: π, √2, e, √5

How can you Identify an Irrational Number?

For any number which is not rational is considered irrational. Irrational numbers can be written as decimals, but definitely not as fractions. Also, these numbers tend to have endless non-repeating digits to the right of the decimal.

What are Rational Numbers?

What is the Difference Between Rational and Irrational Numbers?

Is 2/3 an Irrational Number?

What are Terminating Numbers?

Why are Irrational Numbers Called Surds?