An isosceles triangle is a triangle in which two sides are equal. In the following figure, ∆ABC is isosceles, with AB = AC: Fact 1: The two non-vertical angles (the angles opposite the equal sides) in any isosceles triangle are equal.

Proof: Let ∆ABC be an isosceles triangle with AB = AC. We will compare ∆ABC with itself. In the following figure, on the left – you have ∆ABC, while on the right – you have a flipped version of ∆ABC, which we can call ∆ACB. Thus, ∆ABC ≡ ∆ACB, which means that the corresponding angles are equal. Hence, ∠B = ∠C, which proves that the angles opposite the equal sides in an isosceles triangle are equal.

Fact 2: If two angles are equal in a triangle, then it is isosceles, with the sides opposite the equal angles being equal.

Proof: Suppose that in ∆ABC, ∠B = ∠C. We have to prove that AB = AC. Once again, we compare ∆ABC with (a flipped version of) itself. In the following figure, we are comparing ∆ABC and ∆ACB: 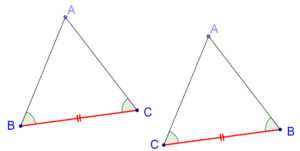 Thus, ∆ABC ≡ ∆ACB by the ASA criterion. This means that AB = AC, and hence our proof is complete.

Alternatively, we could have drawn the angle bisector through the vertex A, as shown below: 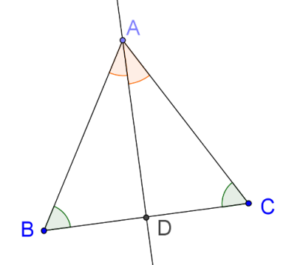 We now compare ∆ABD and ∆ACD: 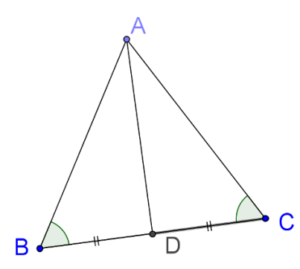 We have to prove that AD is perpendicular to BC. We compare ∆ABD with ∆ACD:

Thus, by the SAS criterion, ∆ABD ≡ ∆ACD. This means that: