A triangle is a closed shape with 3 angles, 3 sides, and 3 vertices. A triangle with three vertices P, Q, and R is represented as △PQR. The most commonly seen examples of triangles are the signboards and sandwiches that are in the shape of a triangle. Let us read more about triangles and the properties of triangles on this page.

What is a Triangle?

A triangle is a simple polygon with 3 sides and 3 interior angles. It is one of the basic shapes in geometry in which the 3 vertices are joined with each other and it is denoted by the symbol △. There are various types of triangles that are classified on the basis of the sides and angles.

Parts of a Triangle

A triangle consists of various parts. It has 3 angles, 3 sides, 3 vertices. Observe the triangle PQR given below which shows the sides, the vertices and the interior angles of a triangle. 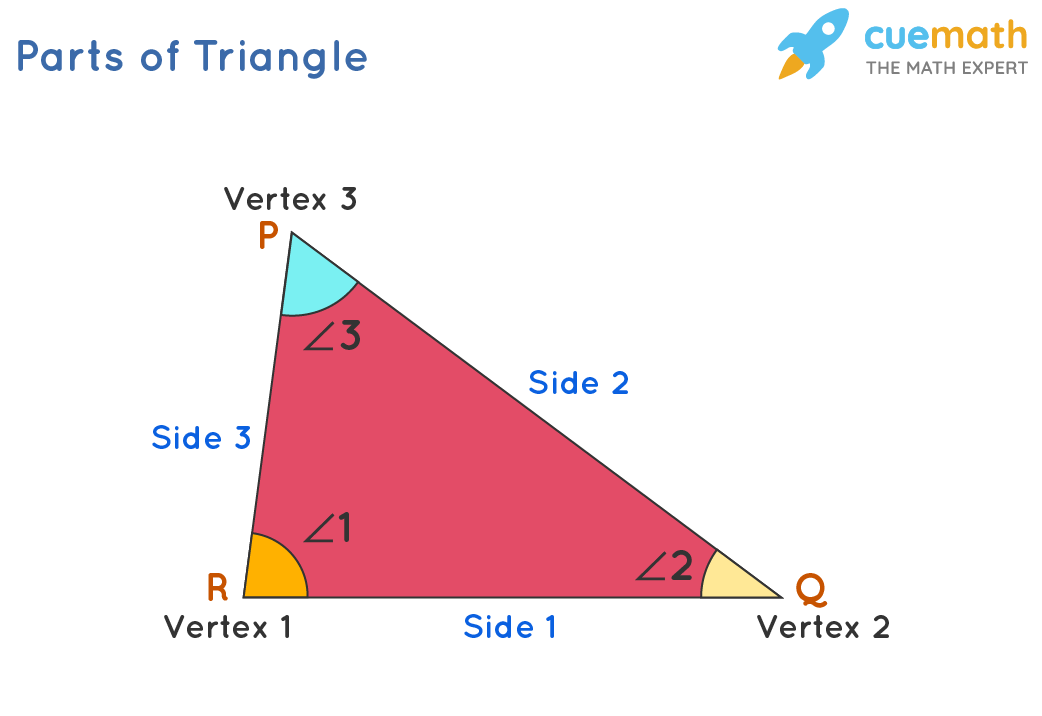 In the triangle given above:

Note: The sum of all the angles of the triangle is equal to 180°.

All geometrical shapes have different properties related to sides and angles that help us to identify them. The important properties of a triangle are listed below.

In geometry, for every two-dimensional shape (2D shape), there are always two basic measurements that we need to find out, i.e., the area and perimeter of that shape. Therefore, the triangle has two basic formulas which help us to determine its area and perimeter. Let us discuss the formulas in detail. 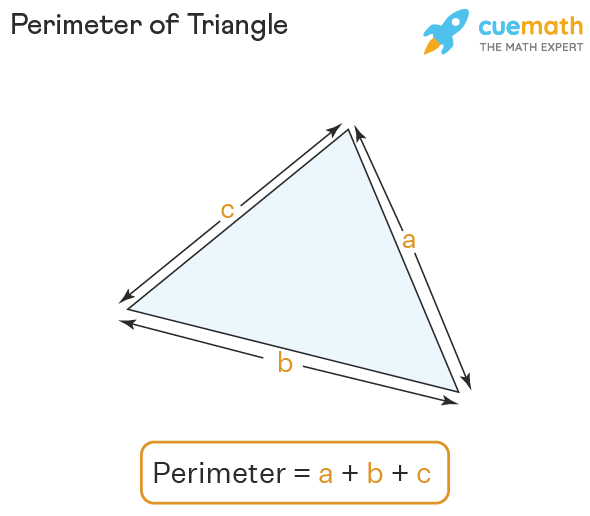 Perimeter of Triangle formula = a + b + c 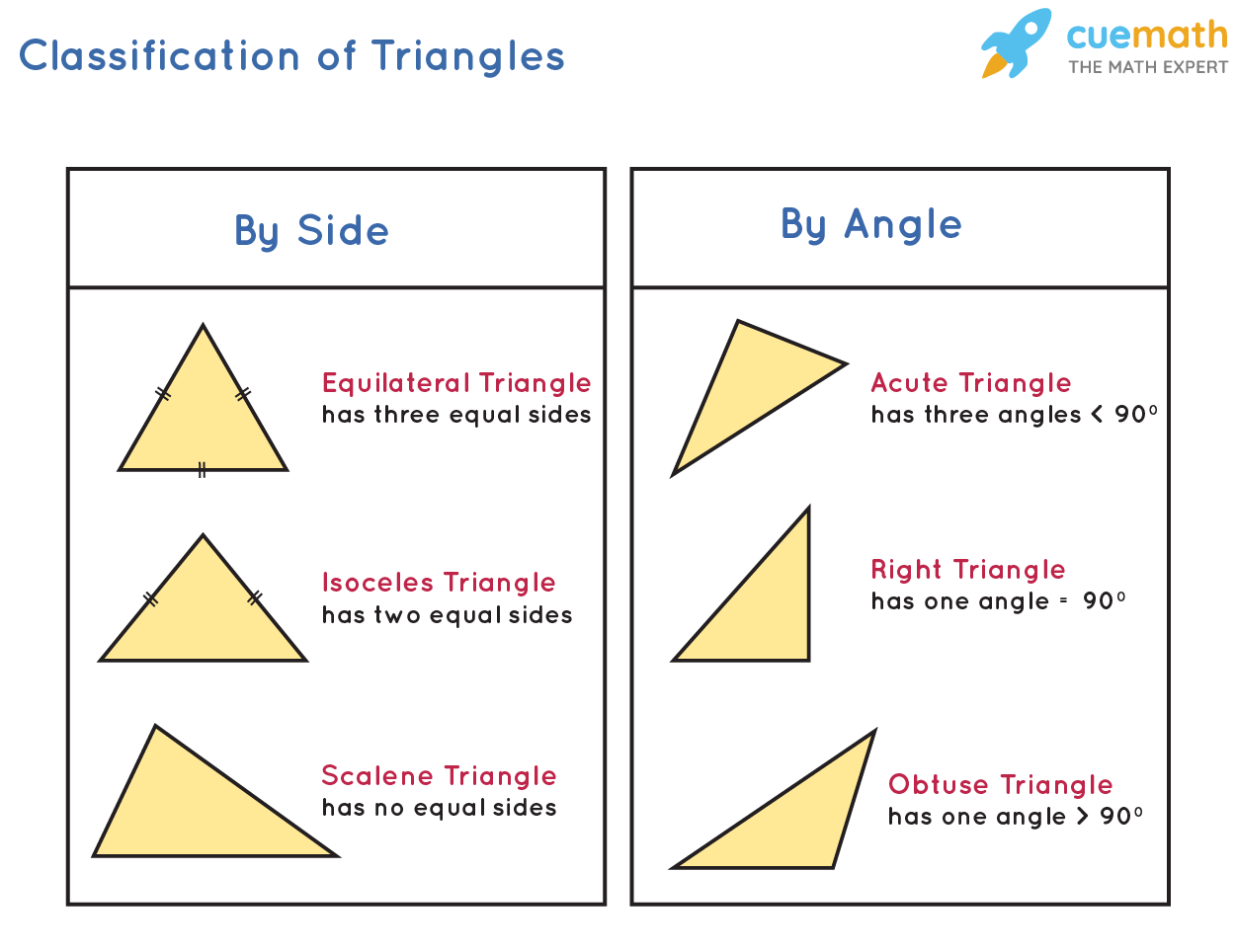 Area of a Triangle 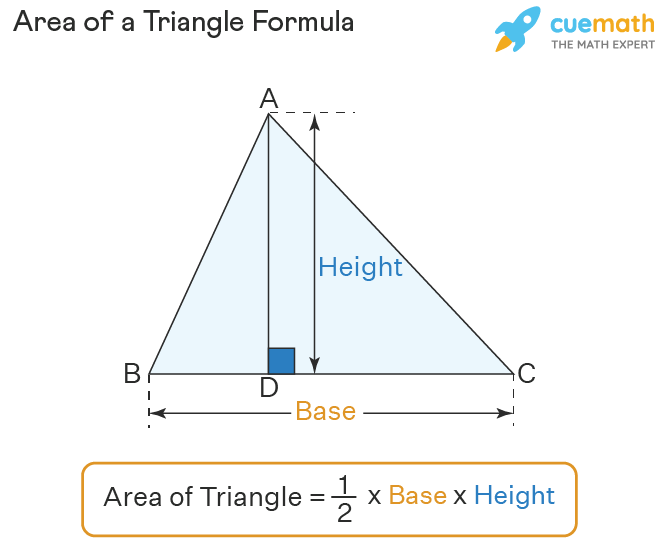 Here, BC is the base and AD is the height of the triangle.

Check out these interesting articles to know more about triangles and topics related to triangles.

What is a Triangle in Geometry?

In geometry, a triangle is defined as a two-dimensional shape with three sides, three interior angles, and three vertices. It is a simple polygon in which the 3 vertices are joined with each other and it is denoted by the symbol △.

What are the Two Basic Triangle Formulas?

How many Types of Triangles are there in Maths?

There are six types of triangles categorized on the basis of sides and angles as listed below:

No, an isosceles triangle can be an acute angle, right angle, or obtuse-angled triangle depending upon the measure of the angles it has.

What is the Area of a Scalene Triangle?

What is the Formula Used for Finding the Area of a Right Triangle?

What is an Equilateral Triangle?

What is an Isosceles Triangle?

In a triangle, if the length of only two sides is equal and the measure of corresponding opposite angles is also equal, then the triangle is said to be an isosceles triangle.

What is a Right Triangle in Geometry?

A right triangle is a triangle in which one angle is equal to 90° (right angle). In geometry we have three different names for all the three sides of a right-angled triangle: