Polygons are defined as plane (two-dimensional) and closed shapes that are formed by joining three or more line segments with each other. We tend to encounter polygons mostly while we learn about geometry. In this lesson, we will learn about polygons and their identification using charts in detail.

In geometry, the definition of a polygon is given as a closed two-dimensional figure with three or more straight lines. The Greek word "Polygon" consists of Poly meaning "many" and gon meaning "angle". We see many different polygons around us. For example, the shape of a honeycomb is a hexagon. Each polygon is different in structure, they are categorized based on the number of sides and their properties. Thus, all polygons are closed plane shapes.

Identification and Naming of Polygons

We can identify a polygon by checking the following characteristics in a shape:

In order to understand polygons and their naming convention see the chart given below.

This chart shows the naming convention of polygons on the basis of the number of their sides. Each polygon is given a special name on the basis of its number of sides, such a way that when the name of the polygon is written its one part is also influenced by the number of its sides. For example, the trigon, also known as the triangle is made of two words "tri" which means three, and gon mean angles which refers that it is a shape having three angles.

Difference Between Regular and Irregular Polygon

The difference between regular and irregular polygon is given as: 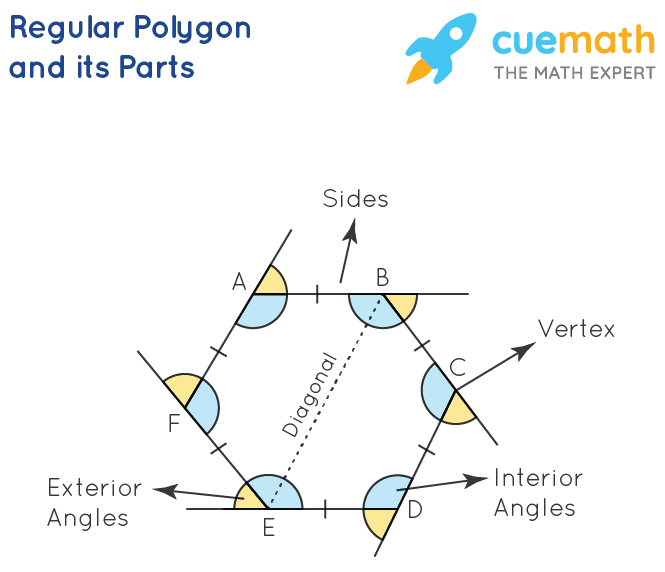 Angles in a Regular Polygon

As we learned above, there are two kinds of angles that can be found in the case of a regular polygon. They are:

Interior Angles of a Polygon

Exterior Angles of a Polygon

There are two basic formulas for polygons listed below:

Let us learn about the above-listed two polygon formulas in detail.

The area of a polygon is defined as the measurement of space enclosed within a polygon. The area of polygons can be found by different formulas depending upon whether the polygon is a regular or an irregular polygon. For example, a triangle is a three-sided polygon which is known as a trigon. The formula for calculating the area of the trigon (triangle) is half the product of the base and height of the triangle. It is expressed in terms of m2, cm2, ft2.

The polygons worksheets will help children recognize more shapes and patterns in real life. It also develops the base of understanding and establishing the necessary basic background for geometry.

These math worksheets should be practiced regularly and are free to download in PDF formats.

Check out these interesting articles to know more about polygon and its related topics.

What are Polygons in Math?

The plane closed shapes that comprise three or more line segments are referred to as polygons. The world polygon as the name suggests is made of two words "poly" and "gon" where the word poly means "many" and the gon means "angles". Polygons are always two-dimensional in shape.

How to Identify a Polygon?

A shape is a polygon if it has the following characteristics:

What is the Difference Between a Regular and Irregular Polygon?

How do you know if a Polygon is Regular?

Any polygon is a regular polygon if it satisfies the below three criteria:

What is the Interior Angle of Regular Polygon?

Is a Circle Considered a Polygon?

What is an 11 Sided Polygon Called?

An 11 sided polygon is referred to as Hendecagon. It is derived from two Greek words "Hendeka" which means eleven and "gon" which means angles. Both the words cumulatively refer to the shape being an eleven-sided polygon.

How are Polygons Named?

The name of each polygon is made of two words. The first part of the word is influenced by the Greek meaning of the number of sides it possesses and it is suffixed by the word gon. For example, the word "Hexagon" is made of two words "hex" and "gon". The word "hex" means the number six and "gon" means the angles. The words "Triangle" and "Quadrilateral" stand as an exception in this case as they are not given as per the nomenclature.

Yes, polygons are always closed shapes as they are made of three or more straight lines which begin and start at the same point. For any shape to be a polygon it is necessary that it is a closed shape. This is also one of the most important criteria used to identify a shape as a polygon.

What is the Area of Polygon Shape?

The total space enclosed by a polygon in a two-dimensional plane is defined as the area of a polygon. We write the unit of area of the polygon as square units such as (meters2 or centimeters2, etc.) or USCS units (inches or feet, etc).

What is the Perimeter of Polygon Shape?

The perimeter of a polygon is defined as the total length of the boundary of the polygon in a two-dimensional plane. Units for polygons perimeter is expressed as centimeters or inches or feet respectively.

Are All Triangles Polygons?

Yes, all triangles are polygons as they follow all the criteria of being a polygon. In the case of any triangle, whether equilateral triangle, isosceles triangle, or scalene triangle, the following criteria are always satisfied:

Thus the above-given points prove that all triangles are polygons.