In maths, a radical is the opposite of an exponent that is represented with a symbol '√' also known as root. It can either be a square root or a cube root and the number before the symbol or radical is considered to be an index number or degree. This number is a whole number represented as an exponent that cancels out the radical. Let us learn more about the concept of radicals, the formula, and solve a few examples.

The radical of a number is the same as the root of a number. The root can be a square root, cube root, or in general, nth root. Thus, any number or expression that uses a root is known as a radical. The term radical is derived from the Latin word Radix which means root. The radical can describe different kinds of roots for a number such as square root, cube root, fourth root, and so on. The number written before the radical is known as the index number or degree. This number helps in telling us how many times the number would be multiplied by itself to equal the radicand. This is considered to be the opposite of an exponent just like addition being the opposite of subtraction and division being the opposite of multiplication. For example: ∛125 = 5 as 5 × 5 × 5 = 125.

The symbol '√' that expresses a root of a number is known as radical and is read as x radical n or nth root of x. The horizontal line covering the number is called the vinculum and the number under it is called the radicand. The number n written before the radical is called the index or degree. Some examples of radicals are √7, √2y+1, etc.

A radical can also be associated with the following terms:

Mentioned below are a few general rules for a radical. 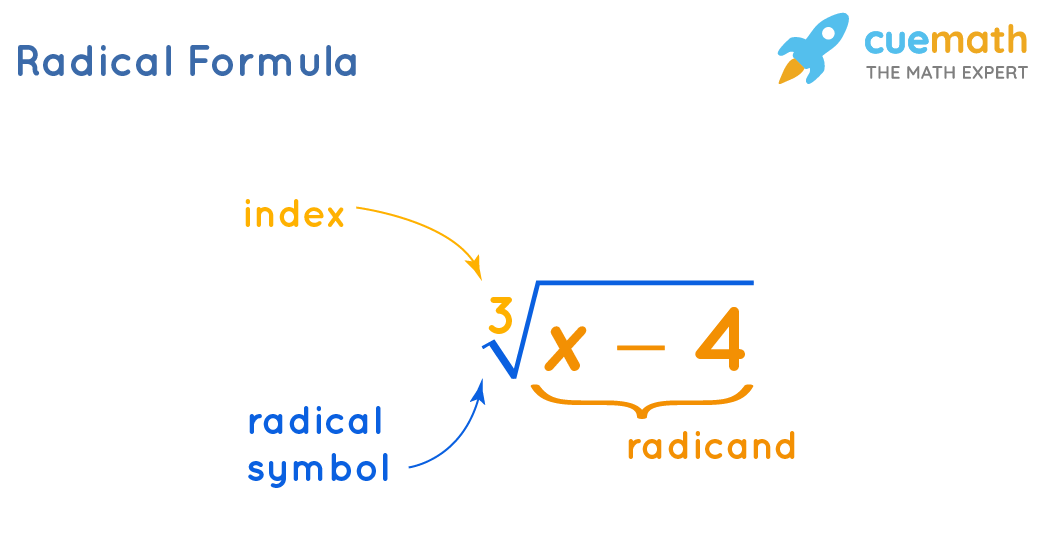 Let's take some examples to understand the radical formula.

Listed below are a few topics that are related to a radical.

What is the Meaning of Radical in Math?

How Do You Solve a Radical?

A radical can be solved by using any of the rules mentioned above in the article. Numbers under the same radical and index can be multiplied, subtracted, divided, and added.

What is the Radical Formula?

To solve any equation to be radical-free, we use the formula.

What is Exponent and Radical?

An exponent of any number shows how many times we are multiplying a number by itself. Whereas a radical is a symbol used to express the root of any number. A radical can be expressed in an exponential form.