Equal to sign is represented as =. We use this symbol when two or more quantities are exactly the same. It can be drawn by drawing two horizontal lines over each other with a little gap in between. Let us learn more about the equal sign along with its uses in this article.

What is Equal To?

The symbol used to show the equal sign is "=" (two parallel horizontal lines). This symbol is only used when the two quantities to be compared are exactly the same. There are different symbols for each comparison aspect.

Here is a list of some of the most commonly used comparison terms and their symbols which are closely related to the equal to symbol in math. 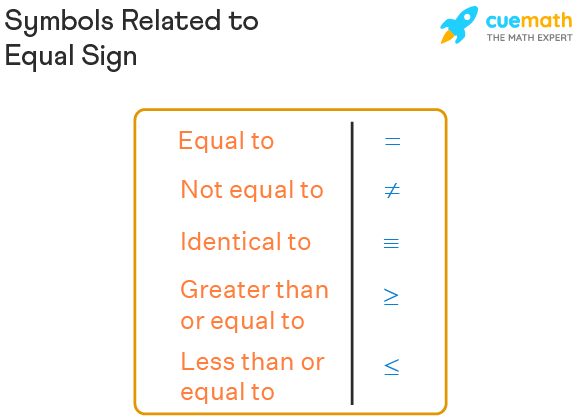 Check these interesting articles related to the equal to sign.

Practice Questions on Equal To

The equal to sign means equality. It shows that the quantities written on both sides of an equal sign are equal or exactly the same. For example, 2 + 3 = 5.

What is Another Word for Equal To?

For geometric shapes, it is preferred to use the word congruent whenever we talk about their equality. Another word for equal to is congruent which is used when two shapes have exactly equal sides and equal angles.

What does the Equal Sign with a Slash Mean?

What is the Equal Sign with a Squiggle on Top?

The equal to sign with a squiggle on top is the symbol of congruence. It is written as "≅". It is used to show congruent figures.

Mathematically, equal to sign is not an operator. It is one of the math symbols used as an equality sign showing two quantities being exactly the same.

On a keyboard, press the "=" key which is on the left of the backspace key. It also has a "+" symbol with it which is used along with the shift key.