Let us check a simple application of probability to understand it better. Suppose we have to predict about the happening of rain or not. The answer to this question is either "Yes" or "No". There is a likelihood to rain or not rain. Here we can apply probability. Probability is used to predict the outcomes for the tossing of coins, rolling of dice, or drawing a card from a pack of playing cards.

The following terms in probability help in a better understanding of the concepts of probability.

Experiment: A trial or an operation conducted to produce an outcome is called an experiment.

Sample Space: All the possible outcomes of an experiment together constitute a sample space. For example, the sample space of tossing a coin is head and tail.

Favorable Outcome: An event that has produced the desired result or expected event is called a favorable outcome. For example, when we roll two dice, the possible/favorable outcomes of getting the sum of numbers on the two dice as 4 are (1,3), (2,2), and (3,1).

Random Experiment: An experiment that has a well-defined set of outcomes is called a random experiment. For example, when we toss a coin, we know that we would get ahead or tail, but we are not sure which one will appear.

Event: The total number of outcomes of a random experiment is called an event.

Equally Likely Events: Events that have the same chances or probability of occurring are called equally likely events. The outcome of one event is independent of the other. For example, when we toss a coin, there are equal chances of getting a head or a tail.

Exhaustive Events: When the set of all outcomes of an experiment is equal to the sample space, we call it an exhaustive event.

Mutually Exclusive Events: Events that cannot happen simultaneously are called mutually exclusive events. For example, the climate can be either hot or cold. We cannot experience the same weather simultaneously.

Probability formula with the conditional rule: When event A is already known to have occurred and the probability of event B is desired, then P(B, given A) = P(A and B), P(A, given B). It can be vice versa in the case of event B.
P(B∣A) = P(A∩B)/P(A)

Probability formula with multiplication rule: Whenever an event is the intersection of two other events, that is, events A and B need to occur simultaneously. Then P(A and B) = P(A)⋅P(B).
P(A∩B) = P(A)⋅P(B∣A)

Answer: The probability of getting a number less than 5 is 2/3.

Example 2: What is the probability of getting a sum of 9 when two dice are thrown?

Answer: Therefore the probability of getting a sum of 9 is 1/9. 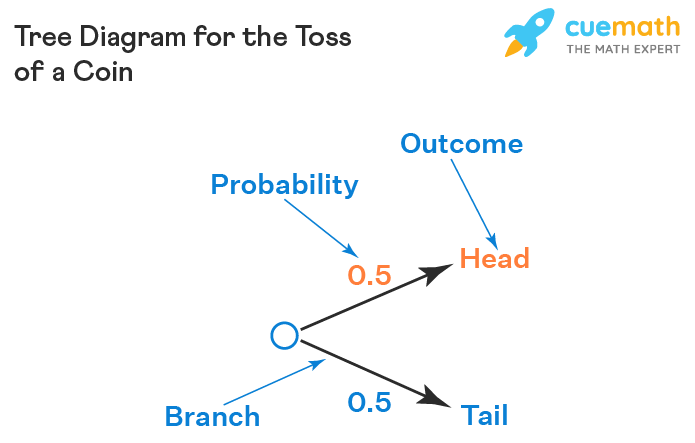 Subjective probability considers an individual's own belief of an event occurring. For example, the probability of a particular team winning a football match on a fan's opinion is more dependent upon their own belief and feeling and not on a formal mathematical calculation.

In axiomatic probability, a set of rules or axioms by Kolmogorov are applied to all the types. The chances of occurrence or non-occurrence of any event can be quantified by the applications of these axioms, given as,

Finding the Probability of an Event

In probability theory, an event is a set of outcomes of an experiment or a subset of the sample space.

If P(E) represents the probability of an event E, then, we have,

Suppose, we are given two events, "A" and "B", then the probability of event A, P(A) > P(B) if and only if event "A" is more likely to occur than the event "B". Sample space(S) is the set of all of the possible outcomes of an experiment and n(S) represents the number of outcomes in the sample space.

E’ represents that the event will not occur.

The number of total outcomes on tossing three coins simultaneously is equal to 23 = 8. For these outcomes, we can find the probability of getting one head, two heads, three heads, and no head. A similar probability can also be calculated for the number of tails.

Many games use dice to decide the moves of players across the games. A dice has six possible outcomes and the outcomes of a dice is a game of chance and can be obtained by using the concepts of probability. Some games also use two dice, and there are numerous probabilities that can be calculated for outcomes using two dice. Let us now check the outcomes, their probabilities for one dice and two dice respectively.

The total number of outcomes on rolling a die is 6, and the sample space is {1, 2, 3, 4, 5, 6}. Here we shall compute the following few probabilities to help in better understanding the concept of probability on rolling one dice. 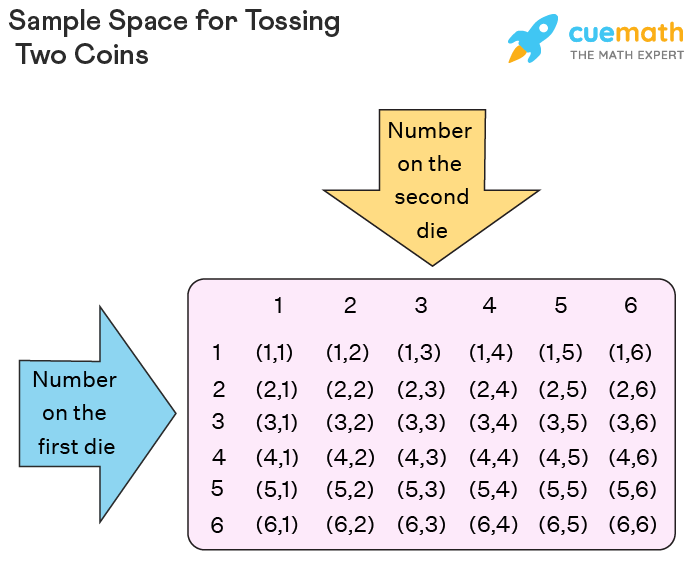 A deck containing 52 cards is grouped into four suits of clubs, diamonds, hearts, and spades. Each of the clubs, diamonds, hearts, and spades have 13 cards each, which sum up to 52. Now let us discuss the probability of drawing cards from a pack. The symbols on the cards are shown below. Spades and clubs are black cards. Hearts and diamonds are red cards. 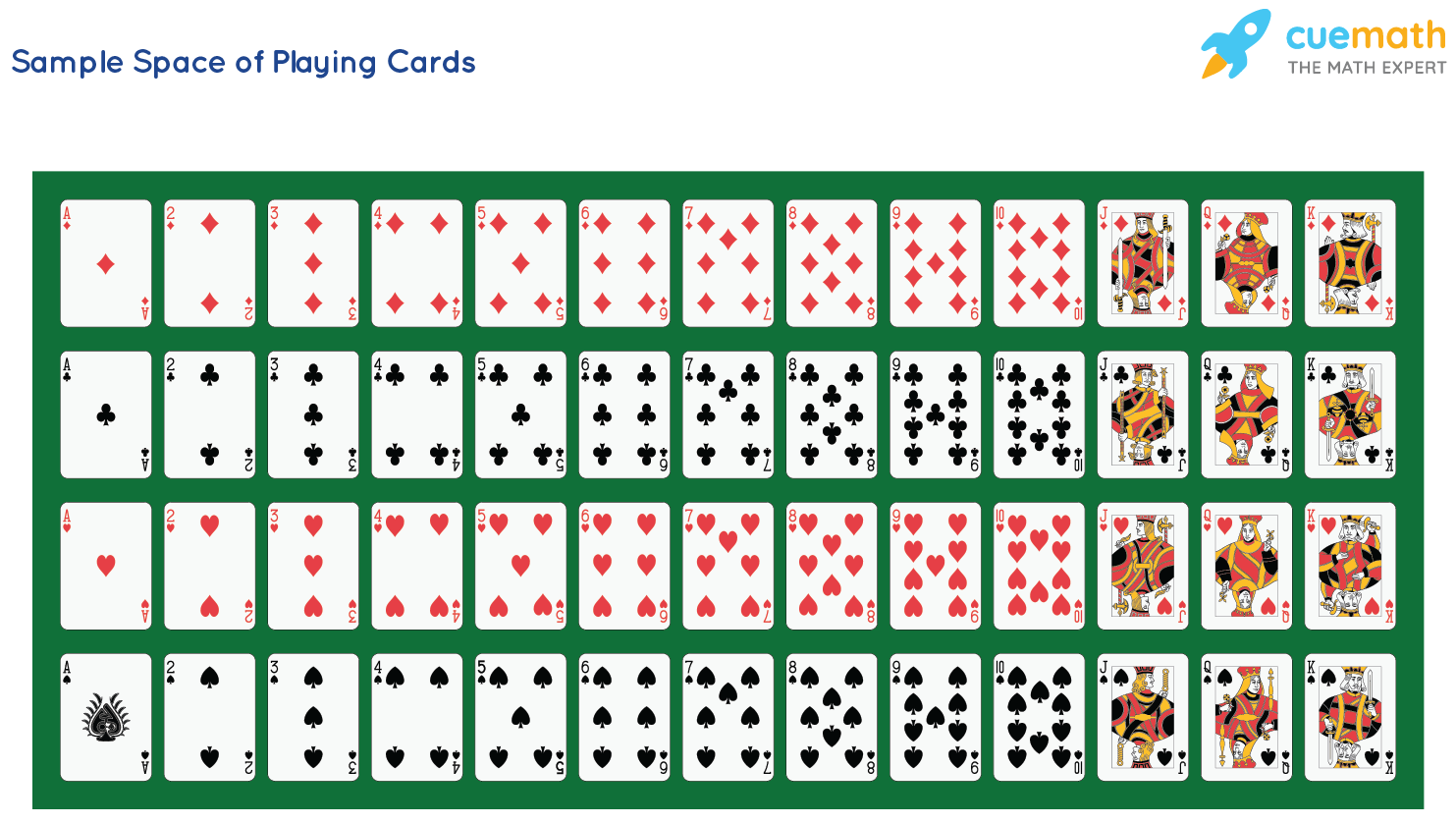 Theorem 5: If there are two events A and B, we can apply the formula of the union of two sets and we can derive the formula for the probability of happening of event A or event B as follows.

where, \(\begin{align}P(A|B) \end{align}\) denotes how often event A happens on a condition that B happens.

where, \(\begin{align}P(B|A) \end{align}\) denotes how often event B happens on a condition that A happens.

\(\begin{align}P(A) \end{align}\) the likelihood of occurrence of event A.

\(\begin{align}P(B) \end{align}\) the likelihood of occurrence of event B.

If there are n number of events in an experiment, then the sum of the probabilities of those n events is always equal to 1.

Let us check the below points, which help us summarize the key learnings for this topic of probability.

Probability is a branch of math which deals with finding out the likelihood of the occurrence of an event. Probability measures the chance of an event happening and is equal to the number of favorable events divided by the total number of events. The value of probability ranges between 0 and 1, where 0 denotes uncertainty and 1 denotes certainty.

How to Determine Probability?

What are the Three Types of Probability?

What is Conditional Probability?

What is Experimental Probability?

What is a Probability Distribution?

How are Probability and Statistics Related?

The probability calculates the happening of an experiment and it calculates the happening of a particular event with respect to the entire set of events. For simple events of a few numbers of events, it is easy to calculate the probability. But for calculating probabilities involving numerous events and to manage huge data relating to those events we need the help of statistics. Statistics helps in rightly analyzing

How Probability is Used in Real Life?

Probability has huge applications in games and analysis. Also in real life and industry areas where it is about prediction we make use of probability. The prediction of the price of a stock, or the performance of a team in cricket requires the use of probability concepts. Further, the new technology field of artificial intelligence is extensively based on probability.

How was Probability Discovered?

The use of the word probable started first in the seventeenth century when it was referred to actions or opinions which were held by sensible people. Further, the word probable in the legal content was referred to a proposition that had tangible proof. The field of permutations and combinations, statistical inference, cryptoanalysis, frequency analysis have altogether contributed to this current field of probability.

Where Do We Use the Probability Formula In Our Real Life?

The following activities in our real-life tend to follow the probability formula:

What is the Conditional Probability Formula?