Rolling a die means throwing it in the air and waiting for it to rest on one of its faces. A die or dice is a solid shape with markings such as numbers on each side of the face; cube is the most commonly used. Many board games use rolling a die as a probability of obtaining a certain number to move ahead in the game such as monopoly, snakes and ladders, ludo, etc. What is the probability that the number we are looking for is the one that will appear on the die? Let us learn more about this concept in this article.

What Do You Mean By Rolling a Die?

Rolling a die means throwing the shape into the air to obtain a certain number to move forward in any game. This die or dice is usually in the shape of a cube with numbers from 1-6 written on each side or face. Every time a die or dice is rolled, there are numerous possibilities of obtaining numbers in that set called sample space. For example, if a cubical dice is rolled there are a set of all the possible outcomes where the numbers on the die become a set. Hence, the sample space has six possible outcomes: {1, 2, 3, 4, 5, 6}. The image below shows a dice with all the sides and numbers on them. 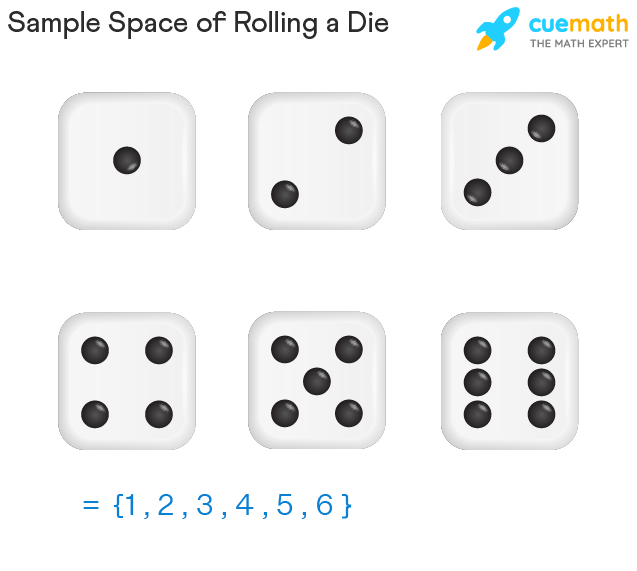 Probability of Rolling a Fair Dice

When one dice is rolled, there is an equal probability of obtaining numbers from 1-6. However, if there are two dice the odds are different. If the die has been constructed in a perfectly symmetrical manner, then we can expect that no outcome will be preferred over the other. Each of the 6 possible outcomes in a fair die has an even chance to appear. For a large number of rolls, the relative occurrence of each outcome should be roughly one-sixth (1/6). Therefore, the probability of getting any 1 number is 1/6. The probability of dice formula is written as:

Look at the image below to understand the probability of each number. 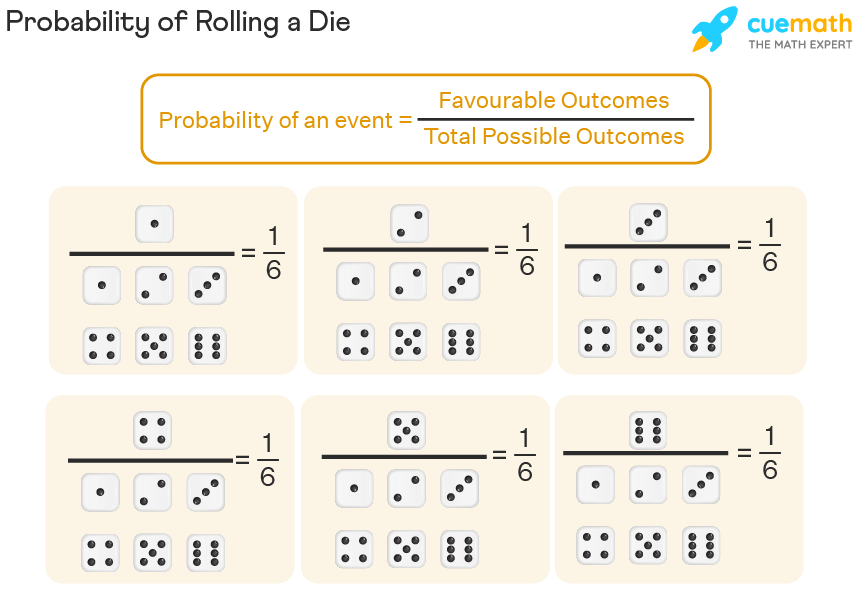 Probability of a Number on Dice

We see that in the probability line below, the probability of an event is 1/6 which lies in the least likely occurring zone. When 0 indicates impossibility, 1 indicates the event certain to happen. Rolling a die has the possibility of 0, which is more unlikely to happen. This is because the sample space has 6 possible outcomes.

Example: suppose that our random experiment is rolling a fair die. Let us define an event E as follows:

Let us look at another example.

The following table shows the number of occurrences and the relative occurrence of each outcome for a loaded die that was rolled 600 times:

Listed below are a few topics related to rolling a die.

Practice Questions on Rolling a Die

FAQs on Rolling a Die

How Many Sides are there in a Fair Die?

There are 6 sides in a fair die.

How Do You Find the Probability of Rolling a Die?

The probability of an event = No. of Favourable Outcomes / No. of total outcomes = 1/6

What is the Probability of Rolling 4 on a Die?

What is the Probability of Rolling 2 on a 6 Sided Die?

What is the Probability of Rolling an Odd Number?

What is the Probability of Rolling a 2 or an Odd Number?

How Many Even Numbers are There on a Die?

Is there a Zero on Dice?

No. there is no zero on a die.

Is a 3 sided Die Possible?

Yes, it is possible to have a 3-sided die which when rolled give us a number between 1 and 3

What are the Odds of Rolling 4 Ones in a Row?

It is the least possible way of getting 4 ones in a row as every number from 1 to 6 has an equal chance when a die is rolled.

What are the Odds of Rolling Even Numbers with 2 Dice?