There are always two sides to a coin- Heads and Tails.

Have you ever made an important decision by flipping a coin?

In American football, the captain of each team chooses a side of a coin and then the referee tosses the coin.

The captain who predicts the toss correctly decides about the goal which his team would defend.

Let us see how this works and what is the probability of each side of a coin. 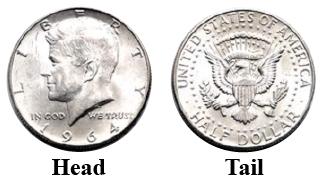 What Are the Possible Events that Can Occur When A Coin Is Tossed?

Every coin has two sides: Head and Tail

We denote Head as H and Tail as Tail.

When a coin is tossed, either head or tail shows up.

What Do You Mean by Tossing A Coin Probability?

Tossing A Coin Probability is the chance of each side of the coin to show up.

The action of tossing a coin has two possible outcomes: Head or Tail. You don’t know which outcome you will obtain on a particular toss, but you do know that it will be either Head or Tail (we rule out the possibility of the coin landing on its edge!).

The general formula to determine the probability is:

When a coin is tossed, there are only two possible outcomes.

On tossing a coin, the probability of getting a head is:

Similarly, on tossing a coin, the probability of getting a tail is:

Try tossing a coin below by clicking on the 'Flip coin' button and check your outcomes.

How Do You Predict Heads or Tails?

Suppose that you toss a coin 100 times. Which of the following results is more likely to occur?

If the coin is a normal everyday coin, in which neither side is particularly prone to showing up more than the other side, you would expect that in a large number of tosses, Heads and Tails should show up roughly an equal number of times. This means that out of the two results above, Result-2 seems to be the more likely one, as the number of Heads is roughly equal to the number of Tails, which concurs with the fact that neither Head nor Tail is a preferred outcome.

On the other hand, in Result-1, the number of Heads is much larger than the number of Tails. Clearly, such a result is extremely biased towards Heads, which is not very likely given that Heads and Tails are equally preferred outcomes. Note that we are not saying that Result-1 is impossible. We are only saying that it is improbable, or unlikely. In other words, the likelihood of Result-1 is much lower than the likelihood of Result-2.

A coin is tossed a certain number of times. The relative occurrence of Heads is 0.75. Can we say that the coin is biased towards Heads?

No, we cannot, because the experiment (tossing the coin) may have been repeated a very small number of times, and thus the relative occurrence in such a scenario will not give the true probability.

It is not possible to comment on the fairness of Coin-B, because the number of times it was tossed is not known. On the other hand, Coin-A seems to be fair, as the relative occurrence of tails over a large number of tosses is almost 1/2.

On tossing a coin twice, what is the probability of getting only one tail?

On tossing a coin twice, the possible outcomes are {HH, TT, HT, TH}

Therefore, the total number of outcomes is 4

Getting only one tail includes {HT, TH}

Therefore, the number of favorable outcomes is 2

We hope you enjoyed learning about Tossing A Coin with the simulations and practice questions. Now you will be able to easily solve problems on Tossing A Coin math with multiple math examples you learned today.

A coin can land on its side if it falls against an object such as a box, shoe, etc.

It is unlikely for a coin to land on its side on a flat surface, but we cannot say that it is impossible.

2. Is flipping a coin a good way to make a decision?

Making decisions by flipping a coin helps a person to decide when stuck between two options because each outcome has an equal probability.

3. How do you predict a coin flip?

Therefore, we cannot predict a coin flip if the coin is fair.

Tossing a coin is considered a random event.

According to Newton, if a person flips in a particular manner at a definite speed, then the outcome can be determined.

5. What is the probability of flipping five heads in a row?

On tossing a coin five times, the number of possible outcomes is 25

Therefore, the probability of getting five heads in a row is 1/25

6. Is flipping a coin a simple random sample?

Simple Random Sample takes a small portion of a large dataset to represent the data.

Tossing a coin is a random experiment and each outcome has equal probability.

Therefore, tossing a coin is a simple random sample.

On tossing a coin, each outcome has an equal probability and there are two outcomes.

On tossing a coin, it is fairer to let the coin fall than catching it because the force of the hands can flip it.

9. What are the odds of flipping three heads in a row?

On tossing a coin three times, the number of possible outcomes is 23

Therefore, the probability of getting five heads in a row is 1/23