The set-builder notation is also used to express sets with an interval or an equation. This is used to write and represent the elements of sets, often for sets with an infinite number of elements. In this, one (or more) variable(s) is used that belongs to common types of numbers, such as integers, real numbers, and natural numbers.

What is Set Builder Notation?

Set-builder notation is defined as a representation or a notation that can be used to describe a set that is defined by a logical formula that simplifies to be true for every element of the set. It includes one or more than one variables. It also defines a rule about the elements which belong to the set and the elements that do not belong to the set. Let us read about different methods of writing sets. There are two methods that can be used to represent a set.

The roster form or listing the individual elements of the sets, and the set builder form of representing the elements with a statement or an equation. The two methods are as follows.

In this method, we list down all the elements of a set, and they are represented inside curly brackets. Each of the elements is written only once and is separated by commas. For example, the set of letters in the word, "California" is written as A = {c, a, l, i, f, o, r, n}.

Here is another example of writing the set of odd positive integers below 10 in both forms. 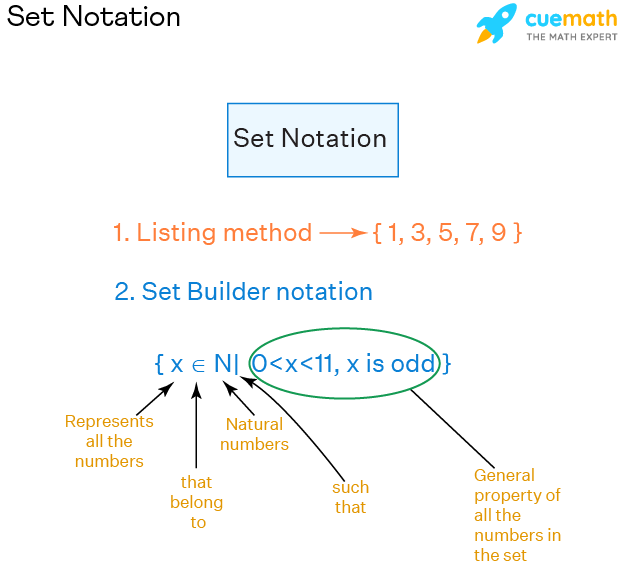 The symbol ∈ ("belongs to") means “is an element of” and denotes membership of an element in a set.

The set builder form uses various symbols to represent the elements of the set. A few of the symbols are listed as follows.

Why Do We Use Set Builder Form?

Set builder notation is used when there are numerous elements and we are not able to easily represent the elements of the set by using the roster form. Let us understand this with the help of an example. If you have to list a set of integers between 1 and 8 inclusive, one can simply use roster notation to write {1, 2, 3, 4, 5, 6, 7, 8}. But the problem arises when we have to list all the real numbers. Using roster notation would not be practical in this case. {..., 1, 1.1, 1.01, 1.001, 1.0001, ... ??? }. But using the set-builder notation would be better in this scenario. The set builder form of real numbers is {x | x is a real number} (or) {x | x is rational or irrational number}.

Set builder notation is represented using the interval notation, and it is a way to define a set of numbers between a lower limit and an upper limit using end-point values. The upper and lower limits may or may not be included in the set. The end-point values are written between brackets or parentheses. A square bracket denotes inclusion in the set, while a parenthesis denotes exclusion from the set. For example, (4,12]. This interval notation denotes that this set includes all real numbers between 4 and 12. 12 is included (as it has a square bracket at 12) in the set while 4 (as it has parenthesis at 4) is not a part of the set. Suppose we want to express the set of real numbers {x |-2 < x < 5} using an interval. This can be expressed as interval notation (-2, 5) and it is shown on the number line below:

Check out a few more articles closely connected to the set builder Notation for a better understanding of the topic.

What is the Definition of Set-Builder Notation in Math?

Set-builder notation is a mathematical notation for describing a set by representing its elements or explaining the properties that its members must satisfy. For example, C = {2,4,5} denotes a set of three numbers: 2, 4, and 5, and D ={(2,4),(−1,5)} denotes a set of two ordered pairs of numbers. Another option is to use set-builder notation: F = {n3: n is an integer with 1≤n≤100} is the set of cubes of the first 100 positive integers.

What is Interval Notation and Set Builder Notation Form?

How do you Write Inequalities in Set Builder Notation?

How do you Express Intervals in Set Builder Form?

How do you Write Domain in Set Builder Notation?