In Mathematics, equations are not always about being balanced on both sides with an 'equal to' symbol. Sometimes it can be about 'not an equal to' relationship like something is greater than the other or less than. In mathematics, inequality refers to a relationship that makes a non-equal comparison between two numbers or other mathematical expressions. These mathematical expressions come under algebra and are called inequalities.

Let us learn the rules of inequalities, and how to solve and graph them.

What is an Inequality?

Olivia is selected in the 12U Softball. How old is Olivia? You don't know the age of Olivia, because it doesn't say "equals". But you do know her age should be less than or equal to 12, so it can be written as Olivia's Age ≤ 12. This is a practical scenario related to inequalities. 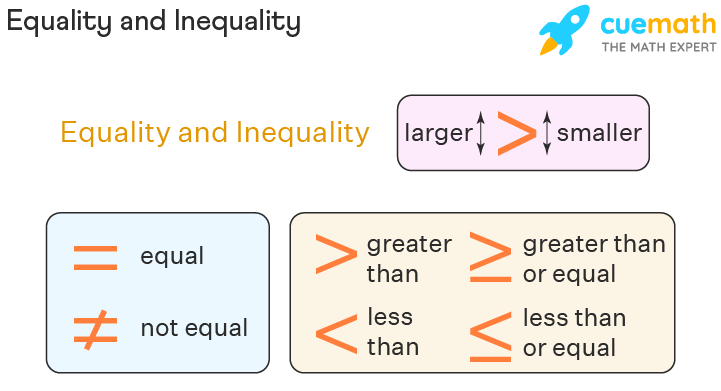 When inequalities are linked up you can jump over the middle inequality.

Swapping of numbers p and q results in:

Example: Oggy is older than Mia, so Mia is younger than Oggy.

So, the addition and subtraction of the same value to both p and q will not change the inequality.

Here are the rules:

Putting minuses in front of p and q changes the direction of the inequality.

Taking the reciprocal 1/value of both p and q changes the direction of the inequality. When p and q are both positive or both negative:

A square of a number is always greater than or equal to zero p2 ≥ 0.

The rules of inequalities are summarized in the following table.

Here are the steps for solving inequalities:

Subtracting 3x and 3 from both sides,

Multiplying both sides by -1,

Notice that we have changed the ">" symbol into "<" symbol. Why? This is because we have multiplied both sides of the inequality by a negative number. The process of solving inequalities mentioned above works for a simple linear inequality. But to solve any other complex inequality, we have to use the following process. 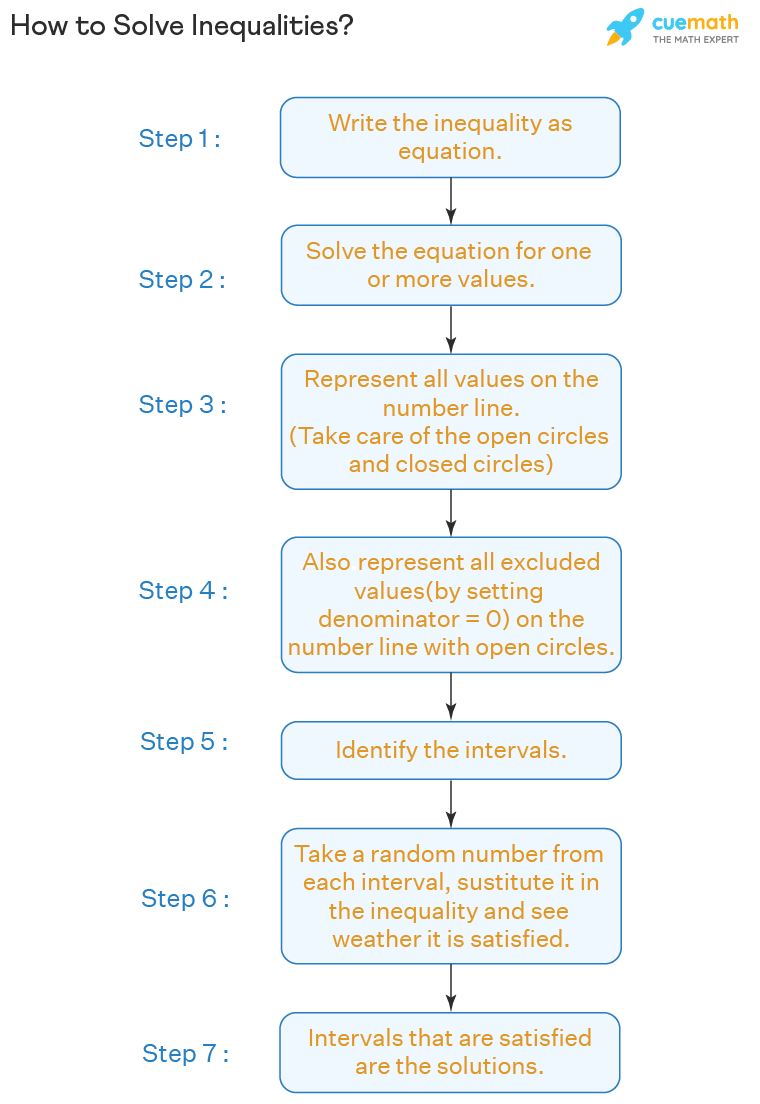 Let us use this procedure to solve inequalities of different types.

While graphing inequalities, we have to keep the following things in mind.

While writing the solution of an inequality in the interval notation, we have to keep the following things in mind.

Here are some examples to understand the same:

For graphing inequalities with two variables, you will have to plot the "equals" line and then, shade the appropriate area. There are three steps:

Let us try some example: This is a graph of a linear inequality: y ≤ x + 4 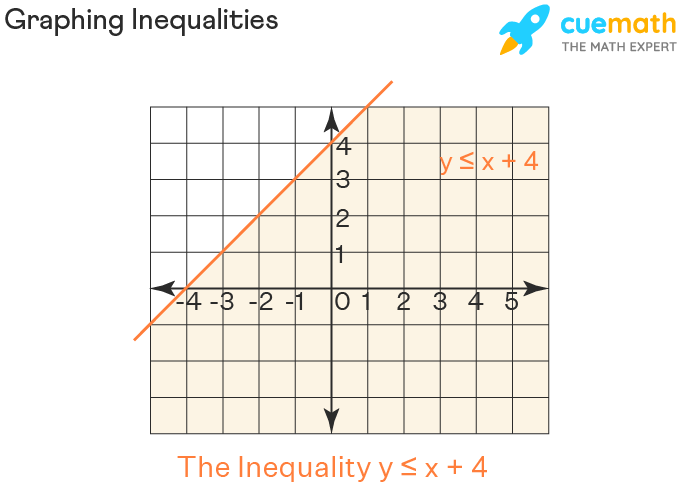 You can see, y = x + 4 line and the shaded area (in yellow) is where y is less than or equal to x + 4. Let us now see how to solve different types of inequalities and how to graph the solution in each case.

Consider an inequality 2x < 6 (which is a linear inequality with one variable). To solve this, just one step is sufficient which is dividing both sides by 2. Then we get x < 3. Therefore, the solution of the inequality is x < 3 (or) (-∞, 3).

Compound inequalities refer to the set of inequalities with either "and" or "or" in between them. For solving inequalities, in this case, just solve each inequality independently and then find the final solution according to the following rules:

Since we have "and" between them, we have to find the intersection of the sets x < -4 and x < -3. A number line may be helpful in this case. Then the final solution is:

Here are the notes about inequalities:

What are Inequalities in Math?

When two or more algebraic expressions are compared using the symbols <, > ≤, or ≥, then they form an inequality. They are the mathematical expressions in which both sides are not equal.

How Do you Solve Inequalities On A Number Line?

To plot an inequality in math, such as x>3, on a number line,

How to Calculate Inequalities in Math?

Solving inequalities graphically is possible when we have a system of two inequalities in two variables. In this case, we consider both inequalities as two linear equations and graph them. Then we get two lines. Shade the upper/lower portion of each of the lines that satisfies the inequality. The common portion of both shaded regions is the solution region.

What is the Difference Between Equations and Inequalities?

Here are the differences between equations and inequalities.

What Happens When you Square An Inequality?

What are the Steps to Calculate Inequalities with Fractions?

What are the Steps for Solving Inequalities with Variables on Both Sides?

When an inequality has a variable on both sides, we have to try to isolate the variable. But in this process, flip the inequality sign whenever we are dividing or multiplying both sides by a negative number. Here is an example. 3x - 7 < 5x - 11 ⇒ -2x < -4 ⇒ x > 2.

How Do you Find the Range of Inequality?

You can find the range of values of x, by solving the inequality by considering it as a normal linear equation.

What Are the 5 Inequality Symbols?

How Do you Tell If It's An Inequality?

How to Graph the Solution After Solving Inequalities?

After solving inequalities, we can graph the solution keeping the following things in mind.