Solving Linear Equations in One Variable

To solve a linear equation with one variable, simplify the equation such that all the variable terms are brought to one side and the constant value is brought to the other side. If there are any fractional terms then find the LCM (Least Common Multiple) and simplify them such that the variable terms are on one side and the constant terms are on the other side. Let us work out a small example to understand this.

Therefore, by substitution method, the linear equations are solved, and the value of x is 2 and y is 4.

Step 1: Check whether the terms are arranged in a way such that the 'x' term is followed by a 'y' term and an equal to sign and after the equal to sign the constant term should be present. The given set of linear equations are already arranged in the correct way which is ax+by=c or ax+by-c=0.

Step 2: The next step is to multiply either one or both the equations by a constant value such that it will make either the 'x' terms or the 'y' terms cancel out which would help us find the value of the other variable. Now in equation (2), let us multiply every term by the number 2 to make the coefficients of x the same in both the equations.

Multiplying all the terms in equation (2) by 2, we get,

Plotting these points on the coordinate system, we get a graph like this. 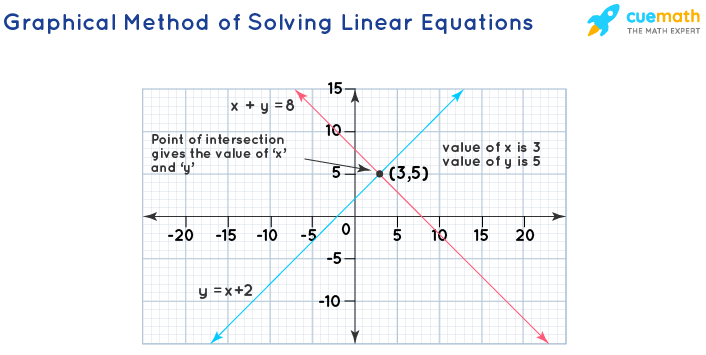 Now, we find the point of intersection of these lines to find the values of 'x' and 'y'. The two lines intersect at the point (3,5). Therefore, x = 3 and y = 5 by using the graphical method of solving linear equations.

Let us look at one more method of solving linear equations, which is the cross multiplication method.

The cross multiplication method enables us to solve linear equations by picking the coefficients of all the terms ('x' , 'y' and the constant terms) in the format shown below and apply the formula for finding the values of 'x' and 'y''. 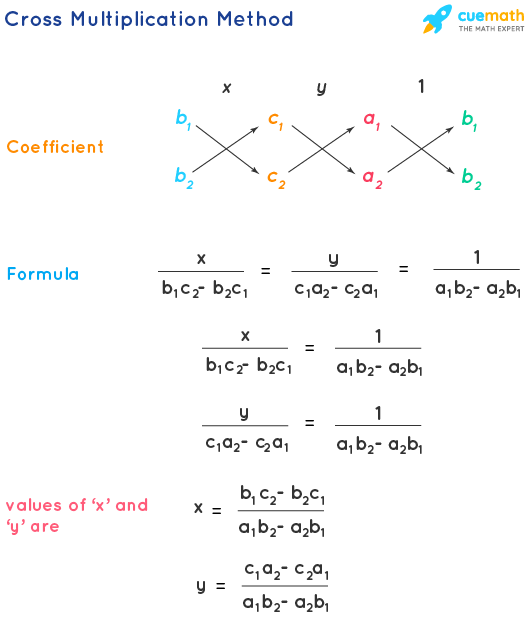 Check the given articles related to solving linear equations.

What does it Mean by Solving Linear Equations?

How to Use the Substitution Method for Solving Linear Equations?

The substitution method states that for a given pair of linear equations, find the value of either 'x' or 'y' from any of the given equations and then substitute the value found of 'x' or 'y' in another equation so that the other unknown value can be found.

How to Use the Elimination Method for Solving Linear Equations?

What is the Graphical Method of Solving Linear Equations?

In the graphical method of solving linear equations, we find the value of 'y' from the given equations by putting the values of x as 0, 1, 2, 3, and so on, and plot a graph in the coordinate system for the line for various values of 'x' for both the linear equations. We will see that these two lines intersect at a point. This point is the solution for the given set of linear equations. If there is no intersection point between two lines, then we consider them as parallel lines, and if we found that both the lines lie on each other, those are known as coincident lines and have infinitely many solutions.

How to Solve a Linear Equation that has One Variable?

How to Solve a Linear Equation that has Three Variable?