Linear programming is a process that is used to determine the best outcome of a linear function. It is the best method to perform linear optimization by making a few simple assumptions. The linear function is known as the objective function. Real-world relationships can be extremely complicated. However, linear programming can be used to depict such relationships, thus, making it easier to analyze them.

What is Linear Programming?

Suppose a postman has to deliver 6 letters in a day from the post office (located at A) to different houses (U, V, W, Y, Z). The distance between the houses is indicated on the lines as given in the image. If the postman wants to find the shortest route that will enable him to deliver the letters as well as save on fuel then it becomes a linear programming problem. Thus, LP will be used to get the optimal solution which will be the shortest route in this example. 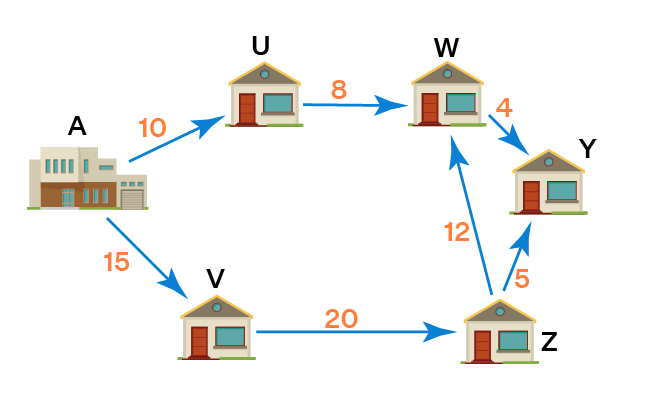 How to Solve Linear Programming Problems?

Let us study about these methods in detail in the following sections.

The simplex method in lpp can be applied to problems with two or more decision variables. Suppose the objective function Z = 40\(x_{1}\) + 30\(x_{2}\) needs to be maximized and the constraints are given as follows:

Step 1: Add another variable, known as the slack variable, to convert the inequalities into equations. Also, rewrite the objective function as an equation.

Step 5: With the help of the pivot element perform pivoting, using matrix properties, to make all other entries in the pivot column 0.

Step 6: Check if the bottom-most row has negative entries. If no, then the optimal solution has been determined. If yes, then go back to step 3 and repeat the process. -10 is a negative entry in the matrix thus, the process needs to be repeated. We get the following matrix.

If there are two decision variables in a linear programming problem then the graphical method can be used to solve such a problem easily.

To solve this problem using the graphical method the steps are as follows.

Step 1: Write all inequality constraints in the form of equations.

Step 2: Plot these lines on a graph by identifying test points.

The feasible region is represented by OABCD as it satisfies all the above-mentioned three restrictions. 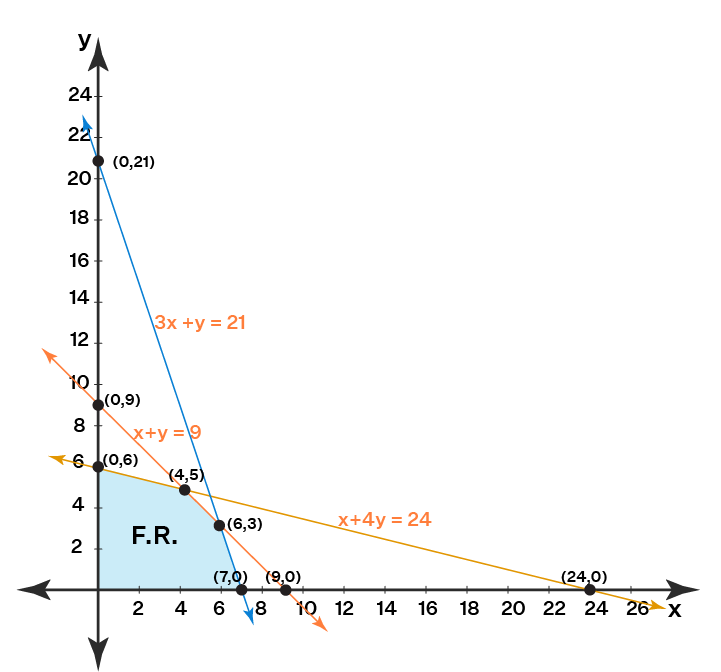 Linear programming is used in several real-world applications. It is used as the basis for creating mathematical models to denote real-world relationships. Some applications of LP are listed below:

What is Meant by Linear Programming?

Linear programming is a technique that is used to identify the optimal solution of a function wherein the elements have a linear relationship.

What is Linear Programming Formula?

The general formula for a linear programming problem is given as follows:

What is the Objective Function in Linear Programming Problems?

The objective function is the linear function that needs to be maximized or minimized and is subject to certain constraints. It is of the form Z = ax + by.

How to Formulate a Linear Programming Model?

The steps to formulate a linear programming model are given as follows:

How to Find Optimal Solution in Linear Programming?

How to Find Feasible Region in Linear Programming?

To find the feasible region in a linear programming problem the steps are as follows:

What are Linear Programming Uses?

Linear programming is widely used in many industries such as delivery services, transportation industries, manufacturing companies, and financial institutions. The linear program is solved through linear optimization method, and it is used to determine the best outcome in a given scenerio.