A less than sign is used to describe the relationship between two values where one value is less than the other value. For example, if 1 < 3 is given, it means that 1 is less than 3. Let us learn how to compare numbers using less than symbol in this article.

A less than sign is defined as the math symbol used to compare numbers where one value is less than the other. It is an inequality symbol used to show the comparison between two or more quantities. For example, if we want to show the comparison between 2 and 3 we will say it as 2 is less than 3 or 3 is greater than 2. Hence it depicts the relationship between these two numbers. We can represent these numbers as 2 < 3.

The less than symbol is '<'. It is an inequality symbol as it does not establish equality between two numbers or expressions. It only tells us that one value is smaller than the other value. For example, if x < 5 is given, it means the value of x is smaller than 5. Look at the less than sign given below. 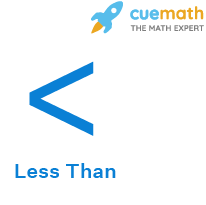 The above symbol is used to show that one value is lesser than the other value. Let us try using it within an example. If the statement says "16 is smaller than 18" is true. Then, we can write it as 16 < 18 using the less-than sign. The wide-open side of the sign with its two points always faces the bigger number, whereas the pointed end faces the smaller number.

To use the less than sign, we draw the wide-open side of the symbol towards the greater number and the pointed end towards the smaller number. Let's compare the two-digit numbers, 32 and 14. While comparing the two-digit numbers, we first compare the tens place digits. If the tens digits are the same, we will compare the digits at the ones place. Here, we can see that 1 is smaller than 3. Thus, we can say that 14 is less than 32. Mathematically, it can be written as 14 < 32 using the less-than sign. Given below are a few more examples showing the comparison between numbers using less than sign.

Less Than Greater Than

Given below is the list of topics that are closely connected to the less than. These topics will also give you a glimpse of how such concepts are covered in Cuemath.

FAQs on Less Than

What is Less Than in Math?

Less than, as the name suggests, means something is lesser than in comparison to some other quantity. It is represented by the symbol "<". For example, 2 < 4 means the number 2 is less than the number 4.

What is the Symbol for Less Than or Equal To?

How do you Explain Less Than or Equal To?

What is the Difference Between Less Than and Greater Than?

No, we can't say 4 is less than 3. Because 4 is bigger than 3. Therefore the correct sentence will be 4 is greater than 3.

The less-than sign is used to show that one value is lesser than the other value. For example, 75 is less than 85. This can be represented as 75 < 85.

Can Less Than be Represented on a Number Line?

What Number is Less Than a Negative Number?