Angles of a square are all right angles. A square is a quadrilateral having the opposite sides parallel. The square shape is characterized by only one dimension, which is its side length. All four sides are equal and each of the angle measure 90°. Let us discuss more on the angles of a square and solve a few examples to understand the concept better.

What are Angles of Square?

A square is a two-dimensional, closed figure with four sides and four corners. The length of all four sides is equal and the measure of all four angles is also equal. A square is characterized as a quadrilateral with all its angles measuring 90°. The properties of angles in a square are as follows: 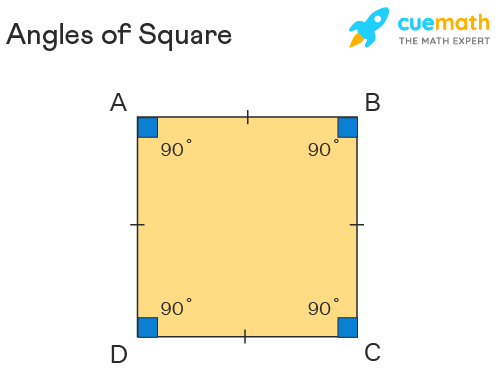 Sum of Angles of Square

Opposite Angles of Square

A square has all four sides equal with the opposite sides being parallel to each other. For a pair of opposite sides of a square, their adjacent sides are transversals, which results in the property that the two consecutive angles are supplementary, that is, they add up to 180°.

The diagonals of a square are perpendicular to each other bisecting each other at 90°. Also, all four sides of a square are equal, say each side measures 's'. A diagonal divides a square into two congruent triangles, that too right triangles with their hypotenuse being the same. Also, each diagonal divides its corresponding vertex angles into two congruent angles, that is angles of the same measure (45° each). 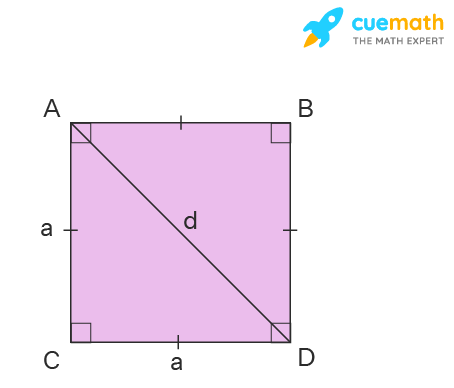 Practice Questions on Angles of Square

FAQs on Angles of Square

What are the Angles of Square in Geometry?

A square has four equal sides and four equal angles. It has two diagonals, each of which splits a corner into two equal angles. The diagonals of a square also act as its lines of symmetry. Thus, a square has four interior angles, each of which is equal to 90°, whereas its diagonals also make right angles at the center as they are perpendicular to each other.

What is the Sum of the Interior Angles of Square?

A square is a special type of quadrilateral having all its sides equal. Thus, being a quadrilateral, the sum of its interior angles equals 360°.

What is the Measure of Each of the Angles of a Square?

Since all the sides of a square and its angles are equal, with all its adjacent sides being perpendicular, thus, each of its angles measures 90°. The diagonals also are equal in length and bisect each other, making right angles at the center.

How Do you Find an Angle in a Square?

What is the Sum of the Exterior Angles of a Square?