Circles Touching Each Other

Circles Touching Each Other
Go back to  'Circles'

Two circles are said to touch each other if they have only one point common – a common tangent can then be drawn to both the circles at that point.

Consider the following figure, where two circles S1 and S2 (with radii r1 and r2) touch each other externally at P. In this case, the distance between O1 and O2 (their centers) is r1 + r2 (note that this rests on the fact that the centers and the point of contact are collinear, something we will soon prove): 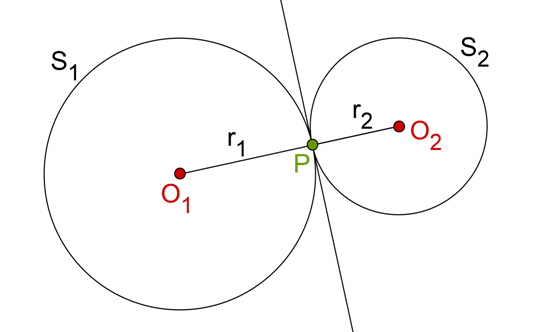 On the other hand, S1 and S2 touch each other internally in the following figure, and the distance between O1 and O2 in this case is r1 – r2 (r1 is the larger radius): 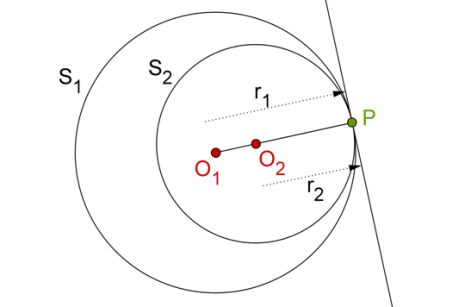 Once again, the fact that the distance between the two centers is equal to the difference of the two radii rests on the fact that the centers and the point of contact are collinear. Note the common tangent(s) in both cases, and the following:

Theorem: If two circles touch each other (externally or internally), then their point of contact lies on the straight line joining their centers. 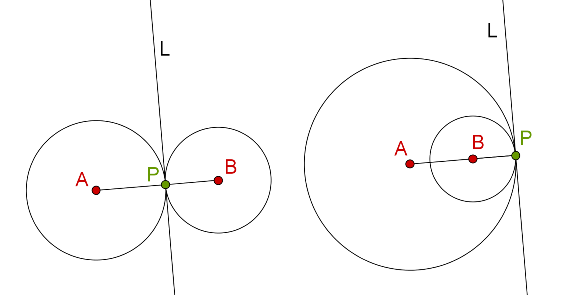 Proof: The justification of this result is quite straightforward. In both the cases above, AP must be perpendicular to L, and so must BP. This is because L is the tangent to both the circles at P. Thus, both the perpendiculars AP and BP pass through the same point P, which necessarily implies that A, P and B are collinear. And we can now further derive the following useful result.

Justifying this should be obvious by now, and is left to you as an exercise. Make use of the fact that A, P and B are collinear.