A set of points is said to be concyclic if a circle passes through all of them. We have already seen that three non-collinear points are always concyclic, because there will always exist a (unique) circle passing through them. The question now is: suppose that there are four points A,B,C and D (any three of which are non-collinear). Will they always be concyclic?

A little thinking will show that the answer is: No. If you draw the circle passing through, for example, A,B and C, it is not at all necessary that this same circle will pass through D as well. Therefore, four points will in general not be concyclic. However, there can be special situations when four points are concyclic. The next theorem discusses one such special situation. 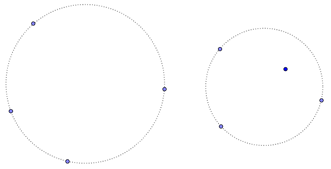 Theorem: If the segment joining two points A and B subtends equal angles at two other points C and D on the same side of AB, then the four points are concyclic. 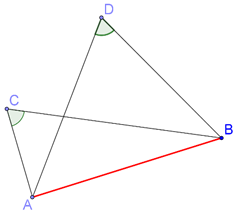 Will A, B, C and D be concyclic? Our theorem says: yes.

Proof: Draw the circle passing through A,B and C. Suppose that it does not pass through D. Then, it will intersect AD (or AD extended) at some point, say, E: 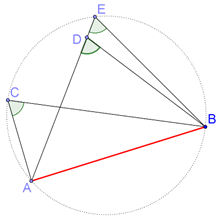 In either of the two cases above, we have:

This equality essentially means that in\(\Delta {\rm{BED}}\), an exterior angle is equal to an opposite interior angle. Is that possible? No.

Thus, the circle does pass through D – and hence all the four points A, B, C and D are concyclic.

Example 1: Prove that any four vertices of a regular pentagon are concyclic. 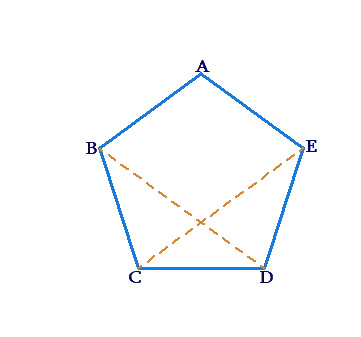