Euclid made use of the following axioms in his Elements. As you read these, take a moment to reflect on each axiom:

As you would have noticed, these axioms are general truths which would apply not only to geometry but to Mathematics in general. Next, let us take a look at the postulates of Euclid, which were (according to him) universal truths specific to geometry. 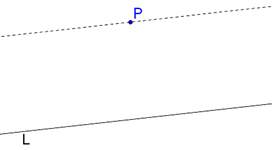 The statement of the fifth postulate presented here is different from Euclid’s original version (more on this later).