Lines Parallel to the Same Line

Go back to  'Angles' 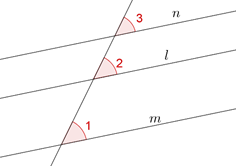 Can we say that m \(\parallel \) n? Draw any transversal across the three lines, as we have done above, and note that

This proves that m must be parallel to n. We formalize this result in the form of a theorem. Example 1: Consider the following figure, in which L1 and L2 are parallel lines: 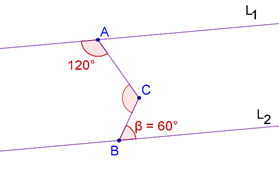 Solution: Through C, draw a line parallel to L1 and L2, as shown below: Example 2: Consider the following figure, in which L1, L2 and L3 are parallel lines. The line AC is perpendicular to L3, as shown: Solution: Since AC ⊥ L3, it will be perpendicular to each of the other two parallels as well. This means that: 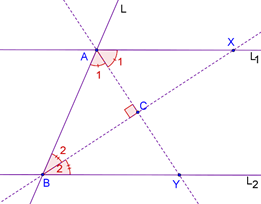 Now, in ΔACB, we apply the angle sum property:

This completes our proof.

Solution: Through A and C, drawn two lines perpendicular to AX and CY. Through B, draw a line parallel to these perpendiculars, as shown (the three dotted lines are parallel): Note how we have marked the various angles. Clearly,

Example 5: Consider the following figure, in which AX \(\parallel \) DY: Solution: Through A and D, draw perpendiculars to AX and DY. Through B and C, draw parallels to these perpendiculars, as shown below (note that the four dotted lines are parallel to each other): 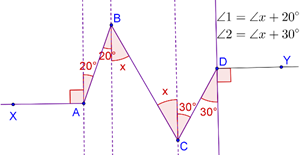 Carefully note how we have marked the various angles, using the fact that alternate interior angles for parallel lines are equal. Now, we have:

Example 6: Three parallel lines are intersected by a transversal, as shown below: 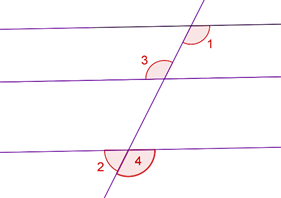